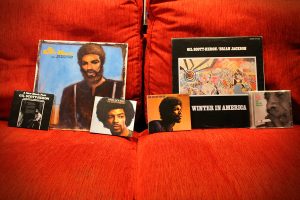 Music today was a trip into the poetic world of Gil Scott-Heron, original rapper, Blues and Jazz singer, the man who wrote The Revolution Will Not Be Televised. His debut album, Small Talk At 25th And Lenox. On this album, backed mainly by just percussion until the Vulture (track 10), Who’ll Pay Reparation On My Soul (track 13) and the last track Everyday (track 14), he introduces his politically charged poems to a small audience at the album title’s location (there’s a small audience who don’t really seem to realize what they are experiencing). It’s the state of America and the plight of the black people at the time. If you haven’t heard Whitey On The Moon from this album, then…well, no life should miss it. But although there’s an un-PC poem mocking a Gay Ball, it’s mainly an accurate appraisal of the disgrace of racism and black and white relations in America. 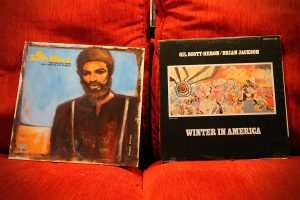 After his debut he made the rest of the decade’s albums with flautist and keyboard player Brian Jackson. Although he appeared on the next two albums, Pieces Of Me (1971) and Free Will (1972), by the next album Winter In America (1974) he was given equal billing. So with Jackson, Heron spread his intellectual visceral street poetry across the Soul, Jazz and Bluesy backdrop he was known for. 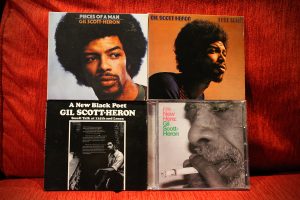 Around the time that Heron and Jackson ceased a regular working relationship, Grandmaster Flash arrived. Without Gil Scott-Heron, Rap and Hip Hop would not be what it is today. These pieces as with most of his works are poetry first, that’s what all rappers would tell you, but in his case it’s unquestionable. I saw Gil Scott-Heron live at the Jazz Cafe in Camden, London, in the nineties. I met his cool and friendly band and my mate Yeb played sax with him that night. He was hours late and was something else. He made his final album, I’m New Here, in 2010, his first in 16 years. In and out of prison, a massive drug problem, he died in may 2011 aged 62 (that’s a month and a number that sound familiar).