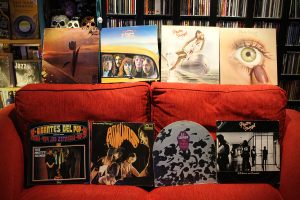 Music today has been all Pretty Things. Their first, self-titled album (1965), had different track listings in the UK and USA. (It reached No. 6 in the UK chart.) Their debut single Rosalyn had reached No. 41 in the UK in 1964 and appeared on the American release of their debut album as did the second single, Don’t Bring Me Down, No. 10 in the UK in the same year (David Bowie recorded both songs on Pin Ups, his covers album released in 1973). At this point they were a noisy Beat Group, but as they developed through their second album, Get The Picture, also released in 1965 to Emotions in 1967, they were not exactly mellowing, but becoming more melodic. Emotions had a softer sound than their first two albums, drummer Viv Prince had gone, replaced by Skip Alan and even before the release of Emotions, rhythm guitarist Brian Pendleton and bassist John Stax had also left the band.

Their masterpiece was yet to come and in 1968 they released SF Sorrow, arguably the first Rock Opera, preceding the release of The Who’s Tommy by six months. Keyboard player Jon Povey was now firmly established in the band, Wally Waller had taken over as permanent bass player, Twink had taken over from Skip Alan on drums, albeit temporarily. The album is essential for any record collection, a melodic, adventurous, Psychedelic and groundbreaking album, that somehow the world forgot to remember. It’s difficult to explain because it is so good, although in America it didn’t stand a chance. It was released in a strange cover, cut in the shape of a gravestone and released on Rare Earth, a subsidiary of Motown. With the wrong label and no successful single it was doomed to failure and the record disappeared without a trace.

This was followed by Parachute in 1970 which saw the departure of Dick Taylor and had Vic Unitt from the Edgar Broughton Band playing guitar on the album. It was another great album and this one actually made it to No. 43 in the British charts. It saw the band finding their way into the seventies and in changing times it wasn’t the easiest transition as the world moved on from the sixties era. Other groups like The Tremeloes struggled despite a change in their sound, they were old news and seen as a lightweight Pop group whereas the Pretty Things were altogether tougher in sound and in image and fitted into the seventies more comfortably despite their sixties roots. Pete Tolson took over on guitar and their ever-changing line up saw them replace Wally Waller with Stuart Brooks on bass and release Freeway Madness (1972). The seventies had now fully taken over and there wasn’t much left of their original sound, but Phil May was still there as was Povey and Skip Alan as they were attempted to stay relevant. Their harmonies from the later sixties albums were intact and that fitted in very well with the sound of the day, but again the album failed to attract enough attention for their label (Warner Brothers) to keep them.

Unsurprisingly after this, they found themselves managed by Led Zep manager Peter Grant and on Led Zep’s Swan Song label for Silk Torpedo (1974). This is the album that introduced me to them as I saw them on the Old Grey Whistle Test in the early seventies, playing live in the studio. At this stage they were fully transformed and with another new bass player in Gordon John Edwards. It might have been this ability to adapt that kept them together for those 55 years, although commercial success remained elusive. This album was a more melodic version of the band after Freeway Madness and I played it a lot. It failed to chart in the UK and only made it to 104 in the US charts and only then because of the power of Led Zep and Peter Grant.

They carried on and released Savage Eye in 1976, again on Swan Song. No chart position in the UK and No. 163 in America. Phil May left the band and their relationship with Swan Song, their big chance, was gone. But then out of the blue after not really, really, really breaking up, both Wally Waller and Dick Taylor returned with Phil May for Cross Talk (1980), but nothing happened.

Over the next 20 years they would only make two albums, Out Of The Island in 1987 was mainly re-recordings of old songs, but then in 1999 they made Rage Before Beauty, their first complete album of original material since Cross Talk in 1980. This was followed by Balboa Island in 2007. Re-recordings, live releases and collections ensued and even the release of an obscure record they made with Frenchman Philippe DeBarge in 1969.

Phil May and Dick Taylor made The Sweet Pretty Things (Are In Bed Now, of Course…) in 2015 and by 2018, finally, they broke up for good. Phil May’s death a sad conclusion to a fascinating musical journey. RIP Phil May. Condolences to friends and family.