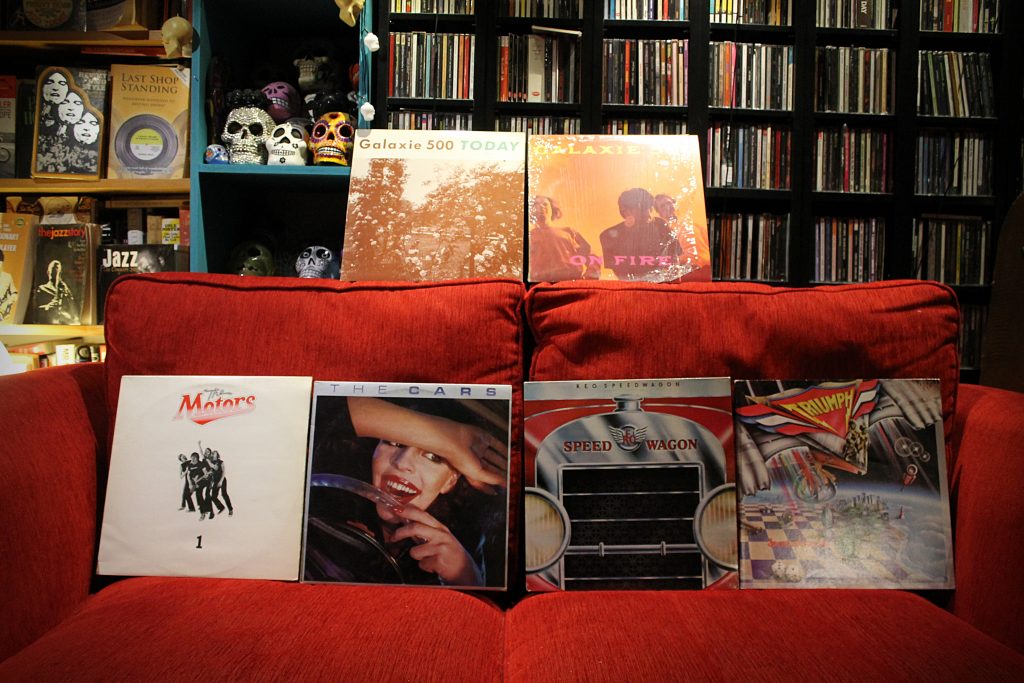 Music today has been mechanical in name, I started with the debut album by The Motors (1977), the hit was Dancing The Night Away and I was seriously about to play the second album that has my favourite song by them, Airport, on it, but I was impatient for that first Cars album (1978). It’s some kind of Sci Fi Pop in sound and image, great songs, much better than The Motors, some kind of slick American expertise throughout. It’s not that The Motors were bad, I liked it, but it did come from that Pub Rock tradition and the sophistication of this first Cars album is literally another world.

I’m sure you are aware that a REO Speedwagon was a type of early American vehicle and you are probably horrified at the thought of being exposed to the music of what became known as American mainstream schmaltz crap. Bauhaus were born as an antidote to this. Well in 1971 when they made this record, nobody had ever heard of them. They had a different singer, Terry Luttrell, who left after this album and although you can give it something of a hard time for, well, sounding like bands sounded then (not fair really), there are moments even if you have to dig for them. Luttrell by the way went on to join Starcastle (the American Yes).

I know you are dying to know the details of the band’s name, well they were named after a truck from 1915, designed by Ransom Eli Olds who also gave his name to the Oldsmobile, the first mass-produced car.

This debut album is a stock standard Rock ‘n’ Roll album through and through with guitarist Gary Richrath (RIP) mostly fighting the keyboard player Neil Doughty for space and with rather ordinary lyrics. So you can skip Side 1 and the first track on Side 2, but then there’s Five Men Were Killed Today (lyrically outside the box for this band) and musically completely somewhere elsewhere, away from this record and straight out of the sixties. The next track is back to basics, but the last track is a ten minute Progressive epic with the untypical title Dead At Last. It seems like as soon as there’s anything to do with death the songs improve and as soon as it’s anything to do with hedonism, cars and girls etc, it isn’t happening. We can learn something from that as if as soon as they get more thoughtful, philosophical, they improve, they’re just trying harder. Dead At Last lives somewhere between Alice Cooper, Blue Oyster Cult and Steppenwolf. Richrath’s guitar is unnecessarily dirty and I really wouldn’t want to put you through having to listen to REO Speedwagon for two tracks that probably aren’t as good as the bands you like from the era. So, my advice, let me listen to this record for you, so you don’t have to bother.

Not wanting to leave those poor lads from REO Speedwagon all alone in a blog that most everybody reading might abandon, I wondered about Canadian Pop rockers from the seventies, Triumph. Named after a car (erm, don’t think so) and one of those bands that all of us who liked UFO, Blue Oyster Cult and The Leppard would try and convince lovers of the Velvet Underground, Television and Sex Pistols were a completely different kettle of fish – to no avail. It was rather like trying to convince your Mum that there was a difference between MUD and Led Zeppelin, it was never going to work.

I have collected all kinds of American and Canadian Rock records from the seventies on my travels to inspect later and see if out of the bright light of criticism any of them are any good. I always like Grand Funk Railroad (I’ll have to wait till a train-themed blog comes up to play them). This is who Triumph sound like to me, mixed with a more metal Bad Company but with Mark Farner from Grand Funk singing. It’s not the Cocteau Twins. It’s North American late seventies Arena Rock radio fodder. I wonder when I hear this about all those young outsiders that were trying to avoid it. The parents didn’t understand the Rock kids that much, but let them go see the spectacle with all its flash bombs and tight pants (we all had tight pants). But they were probably more worried when their kids gravitated towards Captain Beefheart, New York Dolls or David Bowie, the more intellectual or gender challenging groups.

We do like exploring down here, it seemed appropriate to follow Triumph with Galaxie 500 (Velvet Underground meets Jonathan Richman). I’m sure any hipsters out there know all about Damon and Naomi from this band and Dean Wareham’s band after Galaxie 500 split, Luna. I have two of the three albums they made, Today (1988) and On Fire (1989). Ha ha, what a difference hearing this after Triumph. Isn’t it fascinating, the different world that people live in. I’d love to get them in a room together, trying to find common ground. They might agree that murder is bad, but I’m not sure how they could find a connection musically.