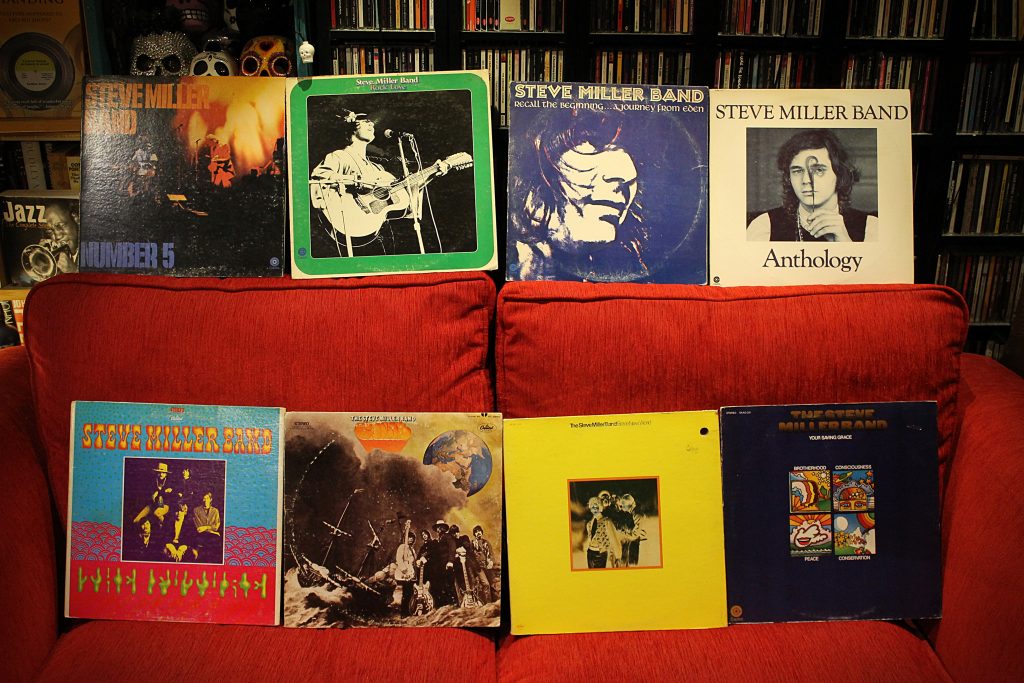 Music today has been a journey into the past of the Steve Miller Band. It took him seven studio albums, a half live and half studio album and an Anthology before finally on the 9th album he came up with The Joker in 1973, the single hit the No.1 spot, the album No.2 on the Billboard charts. But take a look at this long list of his early albums:

Although Miller was born in Milwaukee he found his way to San Francisco after playing in bands in Wisconsin and Chicago and at some point realizing that San Fran was the place to be. He may never have found his way there as when he was 7 he moved to Dallas where he met Boz Scaggs who would be in his band for the first two albums. In 1962 he returned to Wisconsin to attend university already proficient on the guitar, from there via Chicago he took the Psychedelic plunge.

Although he was mostly unknown in England he had a similar success in Canada, but he was unable to come up with a hit single on these early records. It’s an interesting journey that eventually took him to the top of the US charts, selling millions of albums.

But before we go, one fascinating fact from Wikipedia concerning a certain Paul Ramon on Miller’s third album, Brave New World.

“The track My Dark Hour featured Paul McCartney (credited as Paul Ramon) on backing vocals, drums, guitar and bass guitar, and he performed additional backing vocals on Celebration Song. My Dark Hour was recorded in a late-night session on May 9, 1969 after an acrimonious argument between McCartney, John Lennon, George Harrison and Ringo Starr over signing a contract appointing Allen Klein as The Beatles’ financial manager. Lennon, Harrison and Starr walked out, while McCartney remained at Olympic Studios. Miller was the only member of the band to attend the session, and the song emerged from him and McCartney jamming. The primary guitar riff on My Dark Hour was also used on the title track to Steve Miller’s 1976 album Fly Like An Eagle. Space Cowboy uses the same primary guitar riff as the Beatles’ song Lady Madonna, owing perhaps to McCartney’s involvement on My Dark Hour and allied permission.”