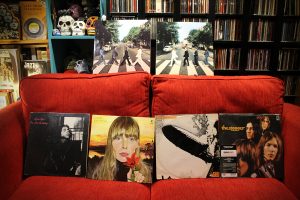 Music today has again found its way to 1969. After Janis I wondered what Laura Nyro was doing that year. It was of course New York Tendaberry, one of her most intense albums. You can see Todd Rundgren falling off his chair as he listened to this and saw a whole other world of songwriting and soulful expression.

Next came Joni Mitchell’s second album Clouds. Somehow not on the radar as much as her other albums despite the fact that it has her version of her much covered song Both Sides Now (recorded first by Judy Collins in 1968). It’s been recorded by Frank Sinatra and well, by hundreds of other artists. This also has the original versions of Chelsea Morning and I Don’t Know Where I Stand which Fairport Convention recorded on their debut album released in 1968 and sung by the great Judy Dyble. (This was the album before Sandy Denny joined the band.)

Well 1969 was something of a turning point so we got a little heavier in here and found an unusual Australian copy of Led Zeppelin 1 on the green Atlantic label. It’s such a great record, despite the stealing. Amazing guitar sounds, fantastic drumming and bass playing and Plant standing in the front and making that unique sound with his vocal chords!

How do you follow that? Easy, the debut Stooges album. I have a nice re-release from Rhino that sounds like somebody really cared about the sound when they remastered it and reissued it. What a great record it is, too. Iggy at times sounds a bit like Jim Morrison and Ian McCulloch sounds a bit like both of them from this era.

So it’s been a while since I heard the new Abbey Road with the extra double album with all the outtakes. Luckily I found a mint copy of it second hand, because these Beatles reissues are way too expensive. I’m still saving up for the multi CD version of the White Album which is over 100 pounds, still it is my birthday next week! Ha ha!