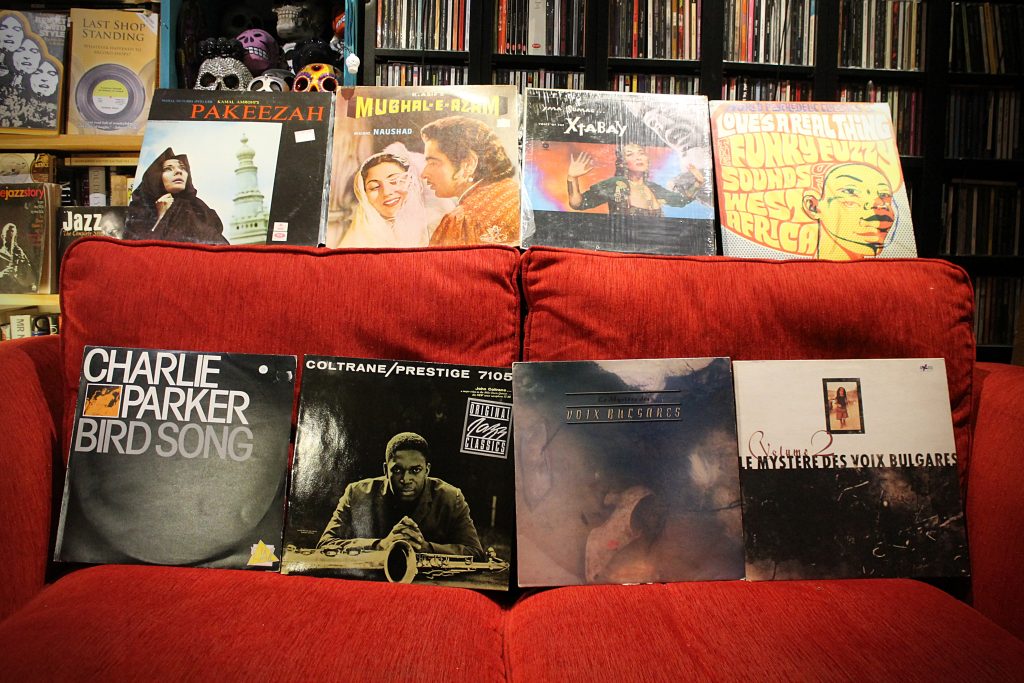 Music today went on a wonderful journey around the world. I have some Odeon, India, albums (Odeon is the label, a branch of EMI). They are soundtracks to movies and as you know the Indian movie industry is huge – there’s Hollywood, there’s Dollywood and there’s Bollywood.

I would be typing for years should I try to break down and research this subject. I know little about it but always enjoy it when I see it, that is the spectacle. The dancing, the colours, the productions. Occasionally an Indian movie gets noticed around the world, the last one was Slumdog Millionaire, there was also Salaam Bombay, but Bollywood proper is an Indian phenomena and hardly infiltrates outside the Indian culture. The two records I played today are two classics, very famous in India, Pakeeza (pure) from 1972 starring Meera Kumari with music by Ghulam Mohammed and Naushad Ali (17 years in the making) and Mughal-E-Azam (The Great Mughal) from 1960 with music by Naushad. Different lyricists on Pakeeza, but on The Great Mughal it’s Shakeel Badatuni (I won’t be following the words), but I will be inspired by the music, the melodies, the singing, the musicians. The latter is a historical drama and unrequited love affair, India’s biggest box office hit, an accolade that it held for 15 years. Pakeeza deals with the love affair of a Nautch Girl (courtesan and dancer). Both films have the repeating storyline in Indian films of lovers who are not allowed to be together (protests in the family usually). To think that these brilliant singers and musicians are so unknown to us.

Zoila Augusta Emperatriz Chávarri del Castillo also known as Yma Sumac was a Peruvian coloratura soprano, which is to do with ornamentation of a melody, they say she could sing five octaves. She was the queen of Exotica in the late fifties. She will blow your mind, she makes Nina Hagen sound like Ian Brown. She was allegedly descended from the last Incan emperor. Voice Of The Xtabay was her debut album, released in 1950.

There was some Jazz tonight, John Coltrane’s first album as band leader released in 1957 on the Prestige label. He’d been fired from Miles Davis’ famous quintet for his drug use. One of the most famous Sax players (he played Tenor, Alto and Soprano). He died in 1967 of liver cancer at the age of 40. Paul Chambers, the double bass player died at 33, these guys knew how to kill themselves. The other Jazz name you might know if you don’t know Jazz is Charlie Parker. He was mainly an Alto Sax player, highly influential in the evolution of Bebop, he died age 34 in 1955. I don’t pretend to know a lot about Jazz, but sometimes I put it on and I like it, that’s enough I suppose.

There was time in the eighties when everyone was talking about Le Mystère des Voix Bulgares (1986). The hip label 4AD had re-released the album after main man Ivo Watts-Russell had been given a dodgy quality cassette by Peter Murphy. This from Wikipedia:

“The album was the result of fifteen years of work by Swiss ethnomusicologist and producer Marcel Cellier and was released in 1975 on his small Disques Cellier label. Some of the recordings he made himself; others were taken from the archives of Radio Sofia.”

The record was on everyone’s coffee table, Kate Bush hired the Trio Bulgarka who had appeared on ‘Volume 2’ (1988) for both The Sensual World (1989) and The Red Shoes (1993). It was something of a World Music Classic, there are now four volumes. Prepare yourself for the incredible tones of this choir of Bulgarian women and their unforgettable Folk Music.

Last record tonight was the African “World Psychedelic Classics 3, Love’s A Real Thing, The Funky Fuzzy Sounds Of West Africa”, put together by David Byrne and Yale Evelev. This is a great record (ha ha, aren’t they all). You can hear where Talking Heads came from when you listen to this. It was a fantastic musical and philosophical journey tonight and it’s going to be a late one trying to get all these records back in the shelves.