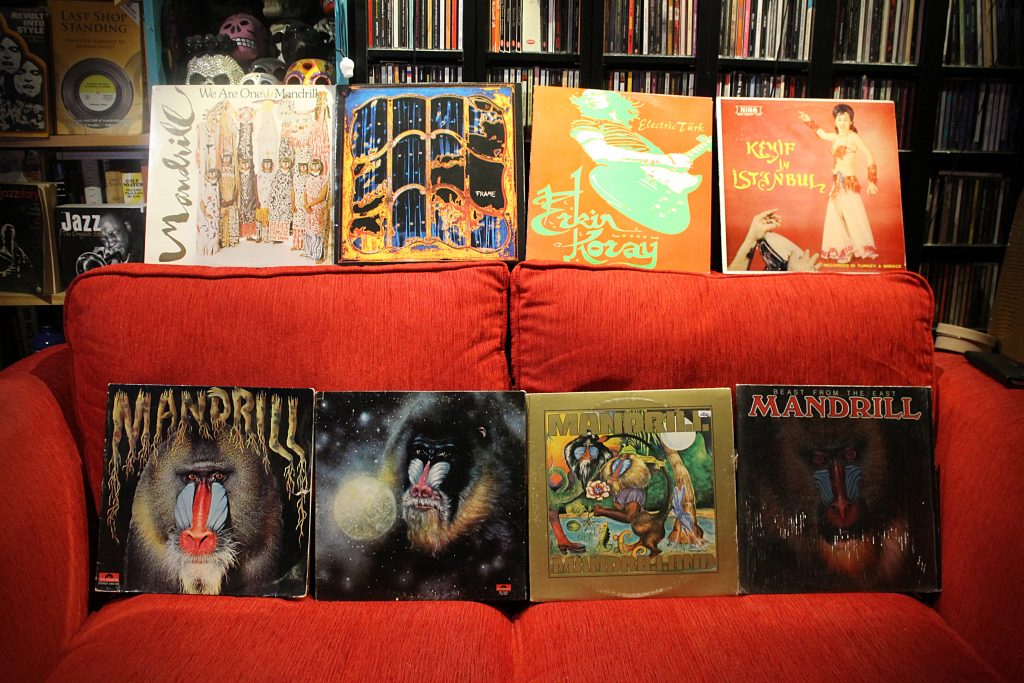 Music today has been mostly Mandrill, a Soul/Funk band from Brooklyn that nobody seems to remember. I’m missing a couple of their albums but I have the first two, self-titled (1971) and Mandrill Is (1972). Then there’s a gap of two albums in my collection, Composite Truth and Just Out Of Town, released in 1973 before we get to the great double album Mandrilland released in 1974. I’m missing Solid (1975). They are somehow Soul, somehow Funk and somehow Progressive all rolled into one. Their later albums Beast From The East (1974) and We Are One (1978) touch a little more on Disco vibes and are less progressive in their thinking, but still have the warm groovy vibe. There are three more albums into the eighties, but I lose them completely after that. I need to scour the shops to find the missing albums as it’s a band I really like.

Last night before I slept I listened to a German band from 1972 called Frame which appeared after being buried under that unsorted pile of records that appeared on the couch last night. Where do these albums come from? They never seem to end. This from Prog Archives:

“Frame is a very little known (unfortunately!) German band which recorded one but highly enjoyable art rock/heavy prog gem called “Frame of Mind” in golden year of ambitious music – 1972. When you hear “German music from the 70s” you probably immediately think about some crazy psychedelic Krautrock but it’s not the case here at all. Frame played a very British style of early prog a la Cressida, Still Life, Beggar’s Opera, Quatermass, Rare Bird, Spring, or Aardvark but with slightly heavier arrangements due to a more aggressive guitar presence. However just like their British fellows, Hammond organ is a main attraction on “Frame of Mind”. In general if you like such English-sounding German groups like Birth Control, Frumpy, 2066 & Then, Virus, Amos Key or Tyburn Tall, you’ll love Frame!”

What are Turkish record shops like? I don’t have many Turkish records apart from the Psychedelic/Turkish hybrid album, Electric Türk by Erkin Koray. My copy is a compilation of his early seventies groundbreaking material and was a very limited release from Stefan Kéry’s Xotic Mind label in Sweden in 1995. He was the first man in Turkey to use the electric guitar and incorporate contemporary sounds and mix Turkish music with Psychedelia. You gotta have it, it’s Fuzztastic and you have just been introduced to Anatolian Rock.

One last album for the night is something much more traditional from Turkey. The lady on the cover is Ozel Turkbas, a singer and dancer as she is described in the short sleeve notes. The title, Keyif In Istanbul, translates to Pleasure In Istanbul, I’m sure there was a lot of that when this album was recorded. The odd thing about it is that Ozel doesn’t actually appear on this album, a compilation? I can’t seem to find a year of release or recording, but I imagine it’s late fifties or early sixties. It’s all worth it for the crazy instrumentation and rhythms and the mad singing, especially by the women.