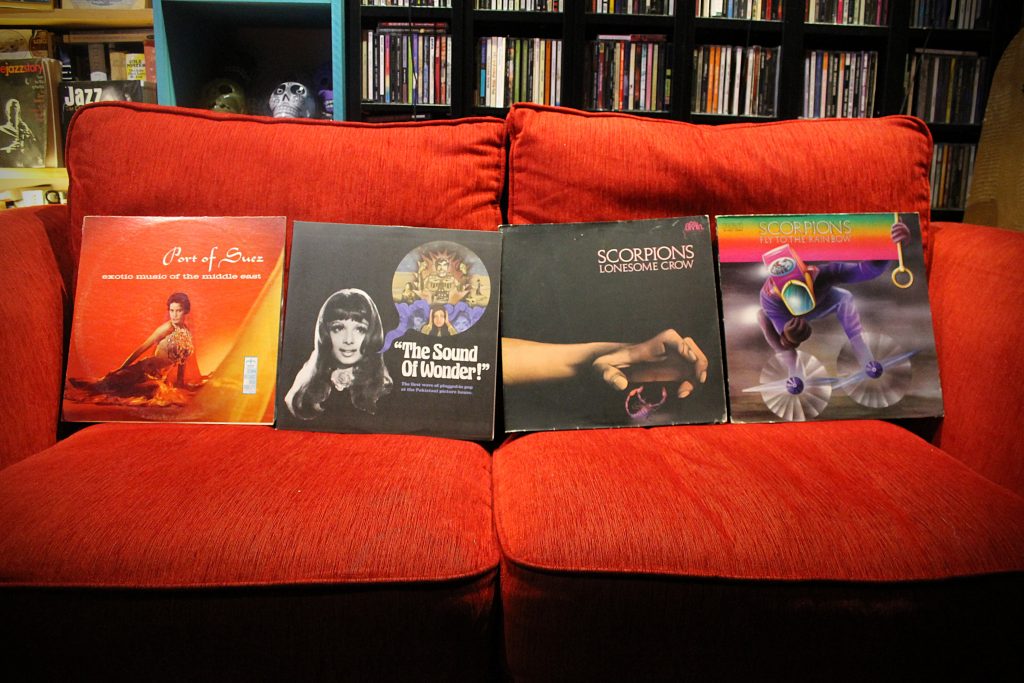 Music today has continued into weirdo land with Port Of Suez, lots of crazy ouds and percussion with mad violinists playing weird Arabic scales. It’s worth it just for the album cover.

Then off to Andy Votel’s label of esoteric content, Finders Keepers. The Sound Of Wonder – The First Wave Of Plugged-In Pop At The Pakistani Picture House. It’s a double album of bonkers music from Pakistan, recorded for film soundtracks for films made in ‘Lollywood’ between 1973 – 1980. For those of you that don’t know, Bollywood is so called because the film industry in India was based in Bombay, well in Pakistan it was based in Lahore, hence the name. The other day I mentioned Hollywood and Dollywood, well there’s even another one, based in Nigeria, you got it, Nollywood.

All this amazing music from exotic countries with odd instrumentation and odd rhythms and inscrutable lyrics makes you just want to listen to Germany’s Scorpions. When the Scorpions first formed their songs were more instrumental than vocal and their first album Lonesome Crow (1972) is one of the great German Rock albums. It’s generally avoided because of what they became musically as well as the leather and spandex image, but if you like great guitar tones and Rock music this is for you. It features not only main man and brother Rudolph but also a 16 year old Michael Schenker. It’s most like an early seventies Deep Purple album with less vocals. It’s also produced by Conny Plank, a reason in itself to listen.

Their second album was Fly To The Rainbow (1974). Michael Schenker had left to join UFO and in losing him they had to regroup with a new version of the band. Uli Roth (lead guitar), Jürgen Rosenthal (drums) and Francis Buchholz (bass) had all been members of Dawn Road and they simply combined bands to create Scorpions 2 with Rudolph Schenker on rhythm guitar and Klaus Meine on vocals. What happened to original drummer Wolfgang Dziony and bassist Lothar Heimberg? They went on to use 6 different drummers and 4 different bass players over their recorded history. For this album the band had left more experimental label Brain and signed to RCA. They recorded their first album in Hamburg, close to Hannover where they were from, but with the new label they were sent to the expensive Musicland studios in Munich for a more traditional guitar and Rock vocal album although at this stage despite his Rock voice, Meine had not as yet been the exclusive Scorpions vocalist, sharing lead vocal with Schenker and Roth.

Roth commented on the Fly To The Rainbow album cover by calling it “ludicrous”. Scorpions went on to have at least 4 controversial album covers in the coming years, but that’s for another day. They went on to sell millions of records but as is often the case with Hard Rock bands that find fame, they start great and slowly get worse and worse.