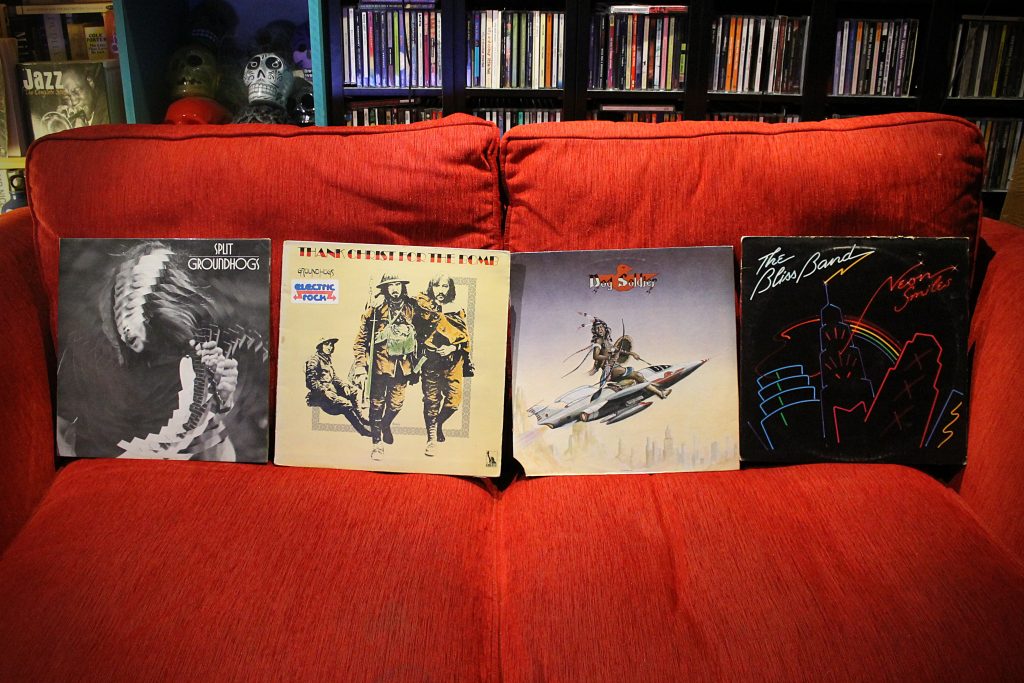 Music today has been Groundhog Day. Groundhogs were one of the most authentic and original British Blues bands, but despite their energy, high quality songs and playing they never seemed to reach the heights they deserved. Led by Tony McPhee on guitar and vocals, with Pete Cruickshank on bass and Ken Pustelnik on drums, they were a power trio extraordinaire. They made two albums in 1970, Thank Christ For The Bomb and Split and if you haven’t heard Cherry Red, Track 1, Side 2 of Split, you still have time before the next bombardment of radio fodder. (Although admittedly I can dig some radio fodder now and again, ha ha.)

In 1975 Keef Hartley made a one off album as Dog Soldier. Miller Anderson who had played guitar, sung and written songs with Hartley on his earlier solo albums was there. Anderson’s resumé is so long and interesting that I’m linking to an interview with him here.

The band also featured Paul Bliss who has led a life in the background, but had success as a composer for Olivia Newton-John, Sheena Eastern and Uriah Heep (strange mixture) and if anyone remembers the Star Fleet theme covered by Brian May, well Paul Bliss wrote it. As a keyboard player he played with the Moody Blues and The Hollies. He made two albums as The Bliss Band, the second album Neon Smiles (1979) featured That’s The Way That It Is, a song covered by Uriah Heep and somehow a hit in the UK (from Abominog released in 1982, the first album without Ken Hensley, where they tried to modernize their sound – that explains it I guess). Neon Smiles is catchy, middle of the road and musos who were obviously living in a bubble with the record labels of the time, confused by Punk Rock. It was everything Punk was against.

Hartley had played with John Mayall and made albums afterwards as band leader with Anderson singing and playing guitar. Hartley and Anderson played at Woodstock and seem to be the only band that played there that hadn’t been released on audio or video till 2019, apparently it’s now available, but I’m not sure where. Hartley was Ringo Starr’s replacement in Rory Storm and The Hurricanes when Ringo left to join The Beatles. Hartley and guitarist Derek Griffiths (also in Dog Soldier) both played in Ronnie Wood’s brother’s band The Artwoods.

Dog Soldier is a very different era to The Bliss Band despite being only four years apart. With Dog Soldier just as you like something, you don’t like something else. One might ask why bother with records like these? (Especially The Bliss Band which is true melodic schmaltz). Well, good question, but sometimes if you can be objective you find a real gem that everyone else wrote off. But this is why the new generation has to take the baton, you can blame The Bliss Band for creating Punk, but also remember that some people like this music, who are we to judge?

Last but not least my Mum went to see Keef Hartley Big Band in Liverpool thinking it was a Swing band, she got a terrible shock. I wonder what she thought sitting in the audience waiting for the band to come on? I wonder what the audience thought of my Mum and her friend? Ha ha.