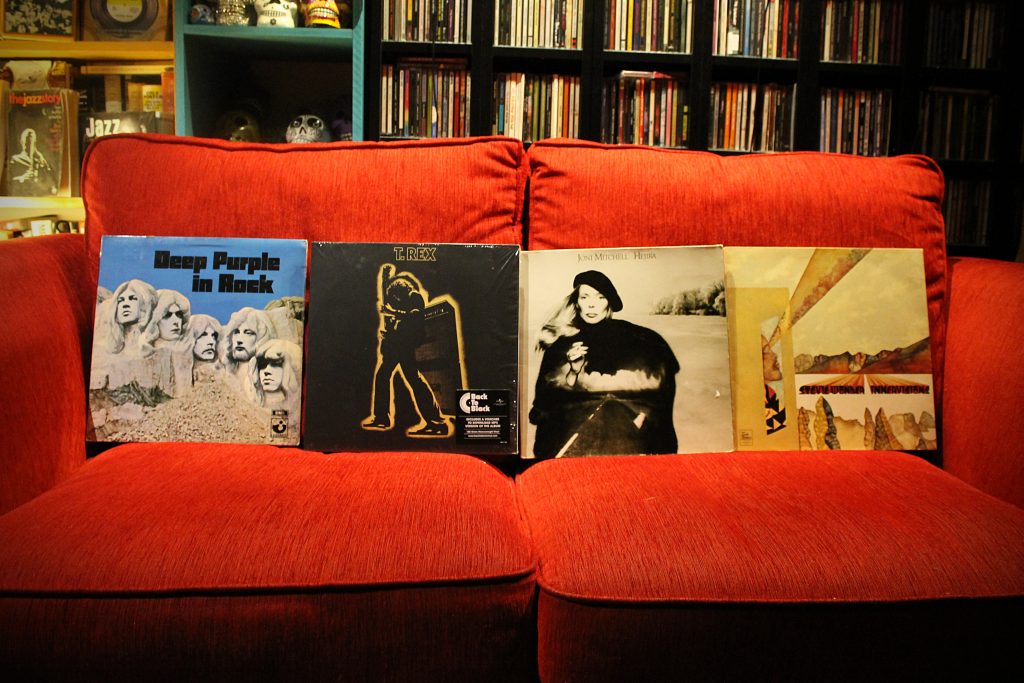 Music today has been chosen by Dare and the first of his four that I listened to was Deep Purple In Rock (1970). He told me that this was the first full price record he bought. It was £2.50 and he shared the cost with his brother Dave. His Dad went mad and said, “You spent all that money on a record?!”. Ah, those were the days. It was also one of my first full price records, it’s where we learned about Ritchie Blackmore. It’s interesting how people gravitate to different things in a band that they like – the words, the voice, the drums, the guitar, even the bass, ha ha, the keyboards? Maybe, but in the case of Jon Lord, he really did make being the keyboard player something cool. Roger Glover had the hat, Paice the glasses, Gillan the shriek and the hair. Ritchie was a big influence on a 13 or 14-year-old about to get his first guitar. Lyrically, we didn’t care, we didn’t really know about lyrics yet and they even printed the lyrics on the inside of the gatefold despite their general low quality (Child In Time was alright), but it was more about the sound. When the first track starts, Speed King, with that mayhem, it was heaven for youth, hell for parents, the seventies had arrived, that screaming voice, Rock music was in, the sixties were over. It was this guitarist and record that inspired me to get a Fender Stratocaster (which I still have and used today in the studio). By the way, Child In Time on this record is a rip off of It’s A Beautiful Day’s Bombay Calling, listen here if you don’t believe me.

When we were at school in the seventies near Liverpool, most kids were into the charts and T. Rex were huge. Some of us were more into the underground bands like Purple, Black Sabbath, Led Zep, the bands that weren’t on the tele or the radio (they were still really popular though). These were the album bands and T. Rex was a singles band. I loved Jeepster and had the single, Get It On was a big hit (that drum intro) and although we (unlike some) liked both Glam and Rock we didn’t always buy the Glam acts albums. I had a choice between In Rock and Electric Warrior (1971) and chose In Rock. These days I see more in Electric Warrior especially in the lyrics, but despite the album cover with the guitar and the big amp, you can’t really put Marc Bolan next to Ritchie Blackmore as a guitarist. Get It On is such a basic R’n’R song, but the lyrics make it something else altogether: “Well you’re slim and you’re weak you got the teeth of the hydra upon you” and “You’re built like a car, you’ve got a hubcap diamond star halo”. Wow and well, it’s also a great song, but then four songs later, The Motivator is kind of a weak relative.

There is some great guitar on this album, it’s a different approach, more about the songwriting, Bolan uses it as a tool, he’s not trying to be a virtuoso, but there’s definitely some cool tones. How good you look with a guitar is as important as how well you play it, Hendrix had both down. Apart from Get It On and Jeepster there’s the wonderful Cosmic Dancer, Bolan’s lyrics and his voice are really without compare. I love Life’s A Gas and sometimes play it live. Tony Visconti producing, what’s not to like, I don’t think Blackmore looked very good with a feather boa.

Stevie Wonder’s Innervisions (1973) is one of the great Motown albums. There were lots and lots of Motown hits at the time. Temptations, Four Tops, Supremes, incredible songwriting and performance, unforgettable. Stevie Wonder was already on a roll when he released this classic album. He released two albums in 1972, Music Of My Mind and Talking Book, Fulfillingness’ First Finale came in 1974, Songs In The Key Of Life in 1976. Great songwriting, singing and often playing most of the instruments on a track. It’s hard to believe that Innervisions was Stevie Wonder’s 16th album. It’s topical, too, the song Living In The City has a section where an innocent black man is arrested by the cops and thrown in jail for ten years, this was 47 years ago.

Joni Mitchell’s classic Hejira was released in 1976. It was an unusual album in that there were no piano songs. The reason was that it was written on different road trips and one main trip she took alone by car from Maine to California. The legend that is Jaco Pastorius plays bass on four tracks, Larry Carlton plays guitar and Neil Young even appears on one track playing harmonica. One must mention the lesser known main musicians on this album, too. John Guerin was a prolific drummer who played on a lot of famous records including five Joni Mitchell albums in this time period either side of Hejira, for a while they were in a relationship, the title track is about leaving him. Max Bennett, lesser known to the public, also plays bass on the album. He joined Guerin on Zappa’s Hot Rats, played on Mitchell’s classic Court And Spark and also has an impressive resumé, too many to mention here, but the link tells you everything. We’ve mentioned percussionist Bobbye Hall and her impressive resumé before. She added an ‘e’ to the end of her name so people might know she was a woman.

Hejira is a smooth Jazzy classic and like so many of her albums, it’s beautiful, it’s intelligent and beautifully recorded, buy it and while you are there buy all her sixties and seventies albums, too. Or if you prefer contemporary artists buy all of Laura Marling’s albums, because this is her training ground.