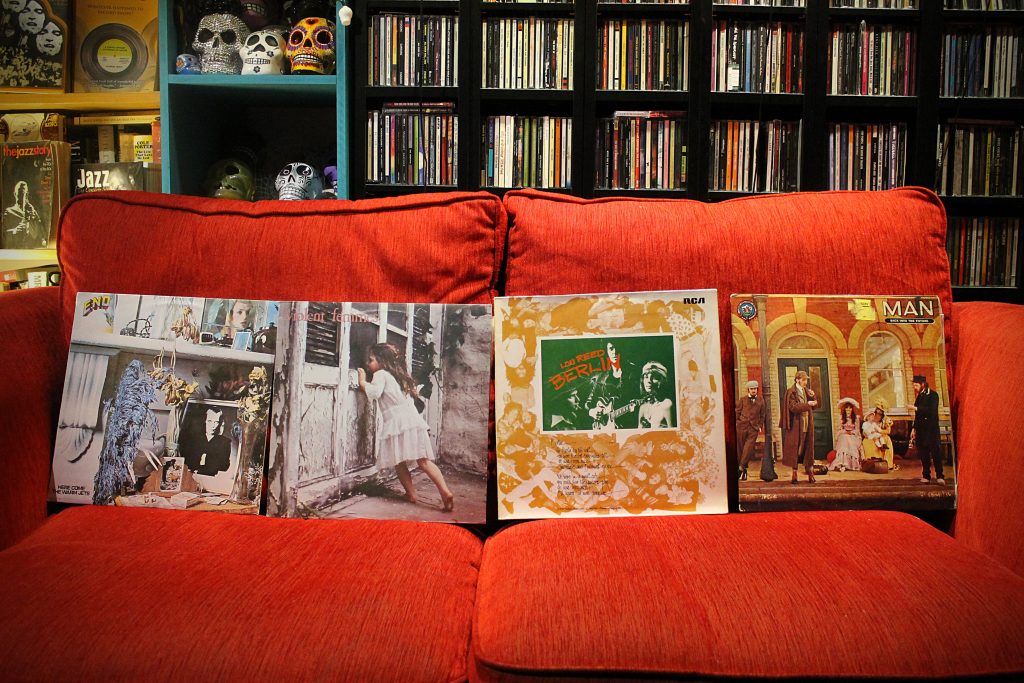 Music today has been chosen by Sessioneer Noel from just south of London. It was Noel who donated his pristine condition collection to the In Deep Music Archive. Some great albums here I haven’t heard for a very long time.

Eno seems to be most famous for three things, ambient music, producing U2 and others as well as being in the initial lineup of Roxy Music (for two albums), but the best thing about him are his four vocal albums. Here Come The Warm Jets (1974) being his first. I played this to death when it first came out. What’s good about it is that it’s just so interesting. Interesting songs, ideas, tunes, approach. Odd lyrics, odd voice, odd arrangements. It’s arty, thoughtful, original and makes you want to wear eye-shadow and fake tiger skin. Heavy friends include Robert Fripp and John Wetton from King Crimson, Phil Manzanera, Paul Thompson, and Andy Mackay from Roxy Music, Chris Spedding from everywhere, Paul Rudolph and Simon King from Hawkwind, Marty Simons from Sharks, Bill MacCormick from Matching Mole, Busta Jones from session land. Love, love, love.

The Violent Femmes debut album took off and I’m sure it was a big surprise to everybody. Great cover art, wacky name and strange musical lineup, snare, acoustic bass, acoustic guitar and Gordon Gano’s funny voice and witty lyrics. It’s like college Folk, catchy, somehow unexpected, smart, ironic, brainy people having fun. Played with them once in Columbus, Ohio, again in California, hung out with Gordon a bit, he was nice. Saw them years ago at the Town And Country Club in London, packed out.

I hadn’t heard Lou Reed’s Berlin for such a long time. It’s another arty masterpiece. Apparently nobody bought it when it came out. That’s how you know how good it is. It’s a great album to listen to into the night, eyes closed, following the characters that Reed remembers or reimagines. A beautiful and tragic album.

The fourth album I played from Noel’s list tonight was another album by Welsh band Man, Back To The Future (1974), after Nicklas Barker’s 2oz Of Plastic With A Little Hole In The Middle from last week. A period of transition for Man with an ever-changing lineup, this was a double album, half studio, half live. It went to No. 23 in the UK chart despite original member Clive John leaving and Deke Leonard gone two albums before (missing presumed forming Iceberg). Bass player Martin Ace was also gone. My first Man experience was the next album Rhinos, Winos And Lunatics where Leonard returned. Three albums later Ace was back for one live album (Maximum Darkness), but they finally split in 1976. There had been a few lineup changes over the years with Mickey Jones the only one playing on every record. They may have been killed by Punk, but they left behind a dozen worthy albums. There’s so many great musical sections on Man albums (wait till you hear the choir on the live sides). Dig! And thanks Noel for the list.