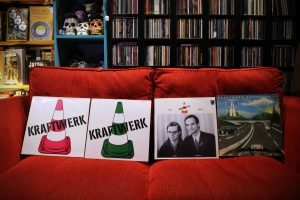 Florian Schneider, co-founder of Kraftwerk with Ralf Hütter, died today. Although he hadn’t been involved in the band for many years he was there through all their records and into the 21st century. The influence that this band had on the music world is immeasurable. I managed to see them live once in Australia with that unique show where they all stood there in front of ‘terminals’, looking futuristic. It was at a festival indoors, perhaps The Big Day Out and the audience didn’t seem that interested when they did anything more interesting and less accessible, but as soon as that sequencer and the childlike melodies came out they were engaged. I suppose the appeal of The Model and Autobahn, Computer World and Tour de France is what made them known to bigger audiences, but if you go back and listen to their earlier albums as I have been doing tonight, experimental doesn’t really cover it. Most people don’t realize that Schneider was a flautist (he also played guitar and violin) and that on their first album on one song at least they had real drums (Vom Himmel Hoch / From Heaven Above) played by the future member of Neu! and La Düsseldorf, Klaus Dinger. We were recently in Düsseldorf and we visited their Kling Klang studios, where we recorded a small video that will see the light of day at some point. Outside the door where the studio was stands a traffic cone so you know you are in the right place. RIP Florian Schneider, condolences to friends and family.

Music today will obviously be Kraftwerk which translates directly to power plant. The two crazy traffic cone albums came out in 1970 and 1972, the first with a red cone, the second with a green cone. At this point they couldn’t have imagined the commercial heights they would reach. Obscure music, obscure cover art, there weren’t many clues on the third album Ralf und Florian (1973), but things were developing, for example they included a picture of themselves on the cover. By 1974 and their fourth album Autobahn the music world was changed – there was a new ingredient. Those sequencers would eventually find their way into very commercial music, remember Donna Summer’s I Feel Love? Eno was listening, Bowie was listening, German Electronic music would have huge influence on your favourite arty Rock stars and when you listen to phase two of Ultravox with Midge Ure, the album and worldwide hit Vienna was produced by Conny Plank (who had worked with Kraftwerk from the beginning), you realize that the German scene that also included Tangerine Dream and Kluster had made their mark. Earlier pioneers such as Conrad Schnitzler (who played with early Tangerine Dream and Kluster) didn’t break through to the mainstream but Klaus Schulze who was the drummer in Tangerine Dream made a number of visible electronic albums from the seventies onwards. Other early artists in love with German Electronic music would be Gary Numan, John Foxx from phase two of Ultravox, Orchestral Maneuvers In The Dark and a million more. The list of German Electronic pioneers and who they influenced is too long for here, but it’s a fascinating journey should you care to take a trip. You Spin Me Round.