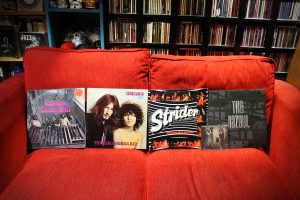 After watching Lord Of The Rings, music tonight is going be, you guessed it, Elf, featuring American singer Ronnie James Dio, who as you know found himself in Rainbow and Black Sabbath as he had something of a distinctive voice, for me best illustrated on the title track of The Butterfly Ball, put together by Deep Purple bassist Roger Glover. But as far as this album, I’m not digging it, I need to hear that first album, you know the one with the great cover with the Elf that costs loads of money. It is in fact called And Before Elf…The Were Elves (1972). The second album Carolina County Ball (1974) is a little too straight ahead and basic, I need a twist or some magic working within the genre, I don’t hear it on this album. Sadly Dio died of stomach cancer aged 67 in 2010.

I followed Elf with a large jump somewhere else, another planet with Unicorn (1969), produced by Tony Visconti. It was the third album by Tyrannosaurus Rex with Marc Bolan and Steve Peregrin Took’s last album as part of the duo. It was a hippie-esque acoustic duo with Bolan’s distinctive vocal style and flowery lyrics with Peregrin Took’s percussion, bass and piano. It made it to No.12 on the UK Charts and features the great Cat Black The Wizard’s Hat with the out of time mad drums at the end. Hey it was the late sixties, everyone was stoned. I’m particularly liking the track Iscariot on Side 2.

Then there’s a children’s story uncredited as a song and read by the late John Peel, a must listen with that special voice of his. The much loved DJ died suddenly of a heart attack in Cusco in Peru. I was all the more saddened by his death because I have actually been to and stayed in that obscure town on the way to visiting Machu Picchu, I could see him there in the streets. I saw him for real once in a cafe in Crouch End, London, I should have said hello, he was a Liverpool supporter. (Olivia’s parents got me an LFC umbrella for my birthday.)

It was another death by car accident with Marc Bolan, losing his life at 29 in Barnes with his girlfriend Gloria Jones driving a mini and crashing into a tree, she survived, can you imagine, how do you recover from that? Steve Peregrin Took died by choking on a cocktail cherry. All these tragic deaths, what happened to dying in your sleep at 100? Birthdays and death, birthdays and death, that’s life.

Strider are long forgotten as a Blues Rock band with an insecure line up. They only made two albums, the second is called Misunderstood (1974) and featured Gary Grainger on guitar. He ended up in Rod Stewart’s band and with Stewart co-wrote Hot Legs and I Was Only Joking. He played sessions with many other seventies luminaries. Strider was of course the alias of Aragorn, heir of Isildur and the throne of Gondor.

Last but not least The Nazgul from Germany who have been called a hoax, a mystery and an experimental adventure. To find out more about them you may need to unravel the mystery with a trip to Cologne in a time machine. There’s a 12 inch single from 1999 which is allegedly the alleged seventies band that allegedly made the self-titled album from the mid seventies – allegedly. (I have the CD.) You need your special ears on for this one.

I suppose I could have played Bo Hansson’s Lord Of The Rings, but it just didn’t occur to me so Song Of The Day is that very album, why not?