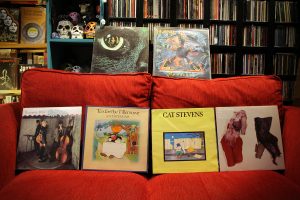 Music today has been cat heavy and I started with Cat Power and The Covers Record (2000). I hear people love her, but I haven’t seen it yet. I’m told that the previous album, Moon Pix (1998), is the album to listen to. This very sparse and simple album of mostly unknown covers sounds very much like it needs to be experienced live, it needs her legendary live emotional outbursts.

Cat make the Partridge Family sound like Pantera. I picked this 1972 album up somewhere in America, I don’t remember where or when, I will have bought it purely because they were called Cat. They are Canadian, formed in 1968 and they are one of those bands that are too middle of the road to be understood from the future unless you were living in the North East of the US or in Canada in 1972 where they might have been on the gig circuit. It’s interesting how bands can be regionally massive, like Head East, big in the Midwest and the South, or Michael Quatro, big in Michigan (brother of Patti who was in latter-day Fanny and Suzi who sold 55 million records worldwide). 55 Million? Really?

On a slight tangent, The Jam fared better in England than in America (obviously you say), and yet Morrissey seems to be really big in America, what’s the difference with these quintessentially English groups? You think America would like the rockier Jam more than the fey Morrissey. In the seventies The Kinks killed it in America and struggled in the UK and what’s more English than The Kinks?

Next came two Cat Stevens albums, Tea For The Tillerman (1970) and Teaser And The Firecat (1971). Some lovely songs on these two albums, Father And Son, Wild World, Where Do The Children Play?, the over-played Peace Train, Morning Has Broken and Moonshadow, Sad Lisa, Tuesday’s Dead. It’s that tone in his voice and his sincerity, can anyone get away with being so sincere these days?

Def Leppard’s Hysteria (1987) with its ridiculous lyrics is a ‘guilty’ pleasure, the tunes, the riffs, those lovely fluffy-haired Sheffield lads, the Queen-inspired harmonies. Then there’s the crazy story of drummer Rick Allen losing his arm in a car accident, incidentally on the Snake Pass (in the Pennines). Apparently a nurse was passing, saved his life if not his arm.

I met Slim Jim Phantom, drummer from The Stray Cats, once in LA when I was hanging out with my mate Jay Aston from Gene Loves Jezebel. What a lovely guy he was too, you can see why Britt Ekland married him (ha ha). Incidentally the famous record store I worked at in Stockholm, Pet Sounds, was started as a partnership between the present owner and Britt Ekland’s brother. I don’t know if you remember but there was a hell of a hoo-ha when The Stray Cats appeared on the scene – in England. Their debut album, produced by Dave Edmunds, went into the Top 10 and their second album Gonna Ball, both released in 1981, went Platinum. The first American album, Built for Speed (1982), was a compilation of the first two UK albums. Their success seemed odd to me because they were, well, so Rockabilly. I couldn’t figure out why the world would want them even if they were good as their fans said they were, because their style was not considered mainstream. Perhaps it was because they weren’t really like other things, you never know if complying with or bucking the trend is going to work. They went on to sell Gold and Platinum albums in America over their initial five years together.