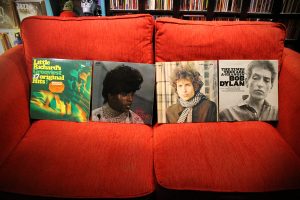 When a legend dies, it’s big news, but when that legend’s heyday was 70 years ago, it means that many of his fans would have already died, too late to honour him. Little Richard was 87 when he passed away today in Nashville succumbing to bone cancer. His raucous Rock ‘n’ Roll voice and punctuated falsetto, his whoops and screams and his flamboyant appearance (always in makeup with bouffant hairdo) made him as popular as Elvis in the mid fifties. He was one of the originals, admired by The Beatles and by anybody that found themselves in the periphery of his electric performances. When he arrived he was a new style of music. He was about energy and attitude and way ahead of his time. He was allegedly bisexual (when he was 17 he was performing in drag) and an apparent famous voyeur (ha ha), but add this to being a black man with a powdered face and a pompadour in fifties America, wowing segregated audiences, breaking down the barriers as they hit the dance floor together, it’s then that you can understand where the word ‘legend’ comes from.

AC/DC, Deep Purple, Patti Smith, The Kinks, Led Zeppelin, Aerosmith, owe a debt to him. Jimi Hendrix played guitar in his band, but as the sixties arrived he turned to religion. He made a lot of Gospel records and eventually became a minister, but in the seventies he found himself hopelessly addicted to cocaine and went from fining his band for drinking to finding solace in alcohol, PCP and heroin. His records sold millions and the legend lived on. But by the seventies and despite his influence he was on the nostalgia circuit re-recording his big hits for other labels. Still, he became known with Elvis and Jerry Lee Lewis as one of the originals, the architect of Rock ‘n’ Roll. He was one of the first crossover artists, reaching audiences of all races, breaking down barriers with his energy and his songs. His contemporaries loved him, not just Elvis and Jerry Lee but Buddy Holly, Bill Hayley, The Everly Brothers and Roy Orbison, Gene Vincent and Eddie Cochran, all recording his songs.

When he was 14 he’d already impressed Sister Rosetta Tharpe with his talents, his piano playing and voice and although his career was stop start he would eventually be signed to RCA Records and then Peacock Records, but with little success. But where did he get the ideas that would make him a legend? In the harder times between record deals he met Esquerita, a major influence in performance and image. You may wonder why you’ve never heard of Esquerita? Well legend has it that Esquerita taught Little Richard to play the frenetic piano and when you see the pictures, hear the music, experience the style, you’ll wonder why Esquerita isn’t famous, too. After being signed to Speciality Records in 1955, things started to happen and Tutti Frutti became a No.2 hit on the Rhythm & Blues Charts. He had six hit singles in 1956 alone, releasing his debut album in 1957, reaching No.13 on the Billboard Charts (oddly his second album didn’t chart at all). But when he left Speciality in 1959 he had scored 9 top 40 singles in the Pop Charts and 17 in the R&B Charts.

I met Little Richard twice, once with my friend Patti and once with my friend Lian at the Hyatt hotel in LA. He was in the foyer, Lian wanted to say Hi . We walked up and did just that, he was very nice. Sitting at a table, pencil mustache and full makeup. The other time with Patti, she kissed him on the cheek and told him he really was the king of Rock ‘n’ Roll, “Thank you, baby” he said.

His real name was Richard Wayne Penniman, he came from Macon, Georgia and was a major influence on almost everything you ever heard in the world of Rock ‘n’ Roll. RIP Little Richard, condolences to friends and family.

Music today was of course Little Richard, hearing these radical classics one more time. The style has been so watered down by time and this music is thought of as archaic by followers of today’s latest sounds. But all hipsters got there by a process of evolution and that started here as these innovators broke the rules in their day. If you listen to this music in the spirit of the times, you can hear revolution. On face value they are standard Rock ‘n’ Roll, on closer examination they are passionate innovation that led you to where you are today. Let’s remember them that way.