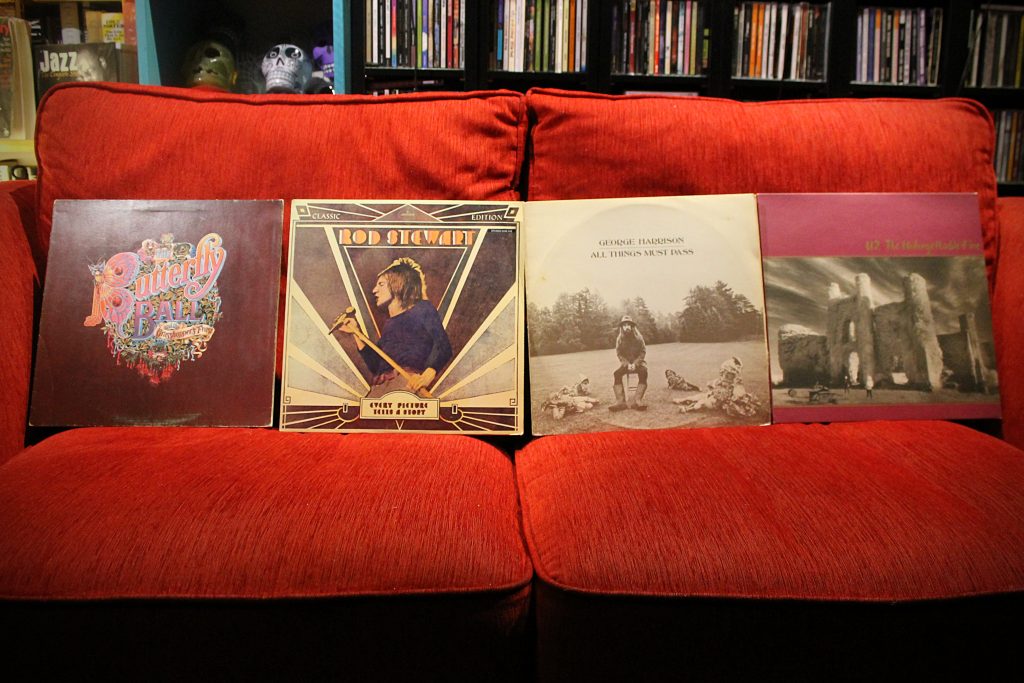 Music today comes from Simone’s Guest List and starts with a concept album called The Butterfly Ball (1974), based on a children’s poem with a cast of thousands including Glenn Hughes, David Coverdale, Ronnie James Dio and Jimmy Helms as lead vocalists, and a core band of Eddie Hardin, Mo Foster, Ray Fenwick, Les Binks, Mike Moran and of course Roger Glover whose name features and who had recently left Deep Purple. It’s a long list of collaborators which originally was a Jon Lord project taken over by Roger Glover when Lord got busy with the band he had just left. The brilliant Love Is All and Sitting On A Dream are sung by Ronnie James Dio and are album high points. Love Is All was a number one single in The Netherlands and Belgium.

The album is based on a poem by William Roscoe (1753 – 1831) and adapted by South African born author William Plomer and illustrator Alan Aldridge with another illustrator, Harry Willock. The artwork was part of the whole concept and the idea was for it to be an animated film, but it was never made. Aldridge has become very well-known for his illustration of anthropomorphic creatures, but he collaborated with another brilliant talent called Harry Willock. Willock was responsible for the Small Faces’ Ogdens’ Nut Gone Flake album cover (1968) and it seems hard to know exactly how much of Aldridge’s work was actually in collaboration with Willock. Famous works were album covers for The Who – A Quick One (1966), Elton John’s Captain Fantastic And The Brown Dirt Cowboy (1975), Gordon Giltrap’s The Peacock Party (1979), the sequel to The Butterfly Ball and The Lion’s Cavalcade book, which was part three. Then there’s The Illustrated Beatles lyrics and the logo for the Hard Rock cafe. Sadly Aldridge died in 2017 but for me his legacy is somewhat tarnished as he took a lot of credit for work that was actually done by Willock or at least shared. It doesn’t mean that Aldridge wasn’t an amazing illustrator and ideas man in his own right, but if he’d just shared more of the glory with Willock then we’d really be able to see his individual talent more clearly. You can read about Harry Willock and his collaboration with the more famous Alan Aldridge here and here.

Rod Stewart’s Every Picture Tells A Story (1971) was a number one album in the US and the UK. Simultaneously Maggie May hit the No.1 spot in both countries. It is in essence a catchy folky Blues album with a whole lot of memorable songs. Tim Hardin’s classic Reason To Believe, Bob Dylan’s Tomorrow Is A Long Time, Bluesman Arthur Crudup’s That’s All Right (into Amazing Grace, believe it or not) and The Temptation’s (I Know) I’m Losing You. Although this is a select collection of songs from other writers, the mega hit Maggie May was written by Stewart and Martin Quittenton who had been the guitarist in Steamhammer (who I really like by the way). Mandolin Wind was written by Stewart alone, showing off his writing skills. A great Rock ‘n’ Roll album that endures due to Stewart’s voice at its best and song choice plus Lane, Wood, Jones and McLagan are playing on it as Stewart was also a member of The Faces at the time. Journeyman bassist Andy Pyle, Pete Sears, Micky Waller on drums, Long John Baldry and Danny Thompson are all there, too. Hilarious musician credit moment, Ray Jackson was credited as “The mandolin was played by the mandolin player in Lindisfarne. The name slips my mind”. Why didn’t he just look it up on the net?

Simone chose The Unforgettable Fire (1984) by U2, which happens to be my favourite U2 album. It wears really well, the eighties sounds can be the worst especially from the viewpoint of 2020. What’s that phrase, “hindsight is 2020”. Have a listen to a Thompson Twins album from the eighties, phew. It’s just that U2 are a four piece Rock band – guitar, bass, drums and vocals, you’ve got to be really trying hard to make it sound bad.

The album is produced by Eno and Daniel Lanois and at this point it seemed an unlikely pairing, but I guess they were all looking for a different direction. Eno/Lanois managed to help them achieve that whilst keeping their sound, keeping their four piece Rock band thing and yet somehow it’s gone moody. The Edge is perfecting his rhythm style on this album, continuing to never play lead guitar (it’s a skill in itself). Bono sounds sweet and sincere, tough and passionate. I guess it’s around now that people started to dislike him voicing an opinion about the state of the world. It never bothered me, I always thought he meant it. My favourite track is the title track, the way it goes into that chorus, the melody, love it. The falsetto the second time around, the groove which is probably an eighties thing that you might hear The Bunnymen doing or Simple Minds. The cover art, overseen and photographed by Anton Corbijn, is atmosphere deluxe. All ‘round great piece of work, what happened?

Last but not least is the amazing All Things Must Pass (1970) by George Harrison. A triple album and arguably the best Beatles solo album. It is the album with My Sweet Lord and the controversy of the writing credit and the fact that the court ruled against him and said that he was “subconsciously plagiarizing” The Chiffons’ He’s So Fine written by Ronnie Mack, was unfortunate. But it wasn’t Ronnie Mack that was suing, it was the publishing company Bright Tunes, Mack had died in 1963. Harrison had to pay 1,6 million dollars to Bright Tunes. I think there’s a deeper story here, I heard once that he just bought the company that was suing him, is that true?

None of this matters, the album is great, packed full of wonderful songs. From the opener I’d Have You Anytime, written with Bob Dylan and with the lyrical guitar of Eric Clapton, My Sweet Lord is next, then Wah Wah, Isn’t It A Pity – that’s side one, so good. Then side two, What Is Life, the second single and another hit. Dylan’s If Not For You is next, I always remember Olivia Newton-John singing it in the seventies based on the George version:

Behind That Locked Door is George’s country song, followed by Let It Down, so many great melodies and sounds. Run Of The Mill ends side two and the amazing Beware Of Darkness starts side three. You can so hear his Liverpool accent on this one. The next track, Apple Scruffs, is about particular die-hard fans who earned a title and a song. I actually know one of them, ha ha, Sue, she lives down here in Cornwall, one of the originals. Hi Sue!

Ballad Of Sir Frankie Crisp was dedicated to the original owner of the house where Harrison lived, featured on the album cover and who Harrison apparently talked about like he was alive. On Awaiting On You All you can hear the sound of Phil Spector clearly in the production. Side four ends with the title track, the song was rejected by The Beatles. Side four opens with I Dig Love, a light moment when you compare it to the more spiritual and soul-searching songs on the record and in contrast to the next track, Art Of Dying. Isn’t It A Pity returns as version 2. It’s worth hearing again in another version, but who would do that these days? It’s another one rejected by The Beatles as is the closing track, Hear Me Lord.

The rest of the album, sides five and six, are what have been called “informal jams”. Everyone should do this, add jams to their record. After listening to the live sections of the Man album last night, I know it’s the right thing to do, if you have a band release the songs and the jams. These tracks, recorded during the recording of the album proper, include Eric Clapton, Carl Radle, Klaus Voormann, Dave Mason, Bobby Whitlock, Bobby Keyes, Jim Gordon, Gary Wright, Jim Price and Al Aronowitz.

All Things Must Pass has contributions from the aforementioned players as well as Ringo, the Badfinger boys, Alan White, Gary Brooker, Pete Drake and Mal Evans. It’s produced by Phil Spector and one of the engineers, Ken Scott, went on to produce Ziggy Stardust and Aladdin Sane for Bowie, Crime Of The Century and Crisis? What Crisis? for Supertramp and oh, the list is soooo long.