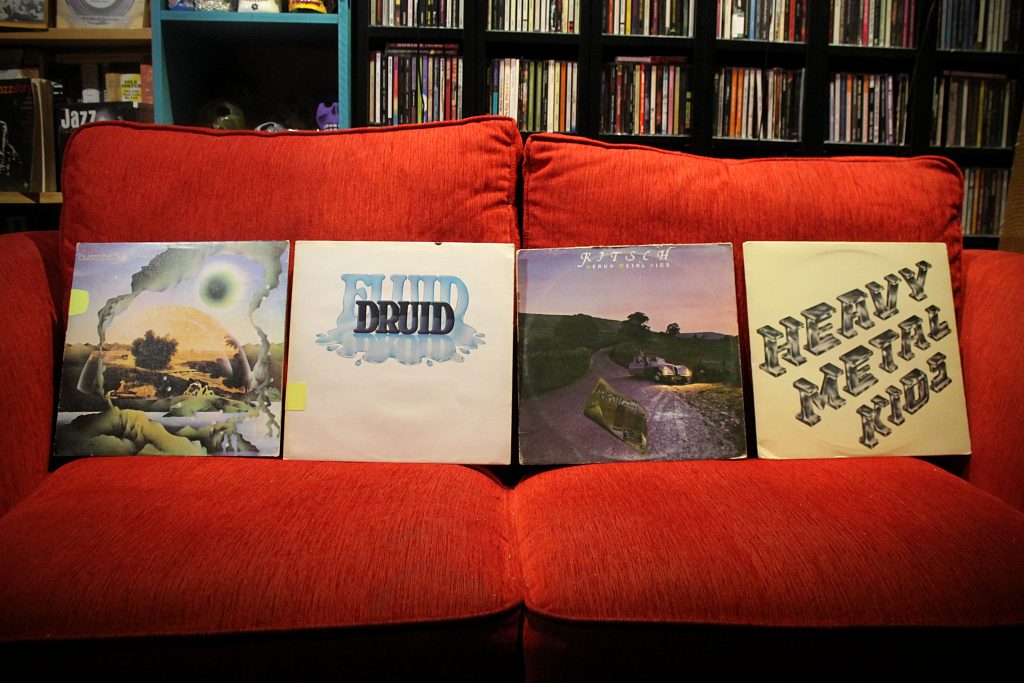 Music today has been a wonderful revisit to another forgotten band. Druid are even more forgotten than yesterday’s Blog Stars Steamhammer. They won the Melody Maker unsigned band contest in 1974 and were signed to EMI. They have a high-voiced singer called Dane who also plays guitar and a prominent bass player (Neil Brewer) with a Chris Squire sound. There are some King Crimson type drums from Cedric Sharpley. I think I actually met him once in the way distant past. Sadly, he died of a heart attack in 2012. Andrew McCrorie-Shand played the keyboards. They say they are like Yes, ‘they’, but only as much as Chuck Berry is like the Rolling Stones. It’s just a style and it seems that everyone with a distinctive voice becomes the influence of others with similar natural tones, even if they’re not. Who knows? I really like this first Druid album Towards The Sun released in 1975. Perfect for Prog heads, Clash fans need not apply. It’s produced by Bob Harris, is that Whispering Bob Harris?

Their second album Fluid Druid (1976) follows the same kind of Progressive path, but at this point the Prog bands were being wiped out by the new generation, Punk and New Wave was coming. Three years later drummer Cedric Sharpley would be touring the planet with Gary Numan, another world. Andrew McCrorie-Shand went on to write the theme tune for Teletubbies, believe it or not! Neil Brewer also became involved with children’s programmes. The big mystery is what happened to Dane? Answers on a postcard.

I saw the Heavy Metal Kids once at the Liverpool Stadium and I remember elements of the crowd didn’t like them much. Mainly because lead singer Gary Holton was playing the Cockney Geezer character, the artful dodger. Well he had to do some artful dodging because some people in the crowd were throwing things at him. But I really liked his crazy Rock ‘n’ Roll voice. They made three albums, self-titled (1974), Anvil Chorus (1975), and Kitsch (1976). The first album was produced by Dave Dee from Dave Dee, Dozy, Beaky, Mick and Tich.

They were named out of a William S. Burrough’s novel, Nova Express (1964). They appeared on Top Of The Pops with the song She’s No Angel from Kitsch (great album), but they soon broke up. In the early eighties Holton and Casino Steele found themselves at No.1 in the Norwegian charts with a cover of Ruby (Don’t Take Your Love To Town), originally made famous by Kenny Rogers And The First Edition. Gary Holton was an actor at heart and he found fame as a TV star on the popular series “Auf Wiedersehen, Pet” which ran from 1983-85. He was also in Quadrophenia (uncredited) and had many different roles from child to adult. He was also a famous hellraiser. He tragically od’d in 1985, he was just 32. Last but not least after Kitsch and the death of Bon Scott, Holton was on the shortlist to join AC/DC but he turned down the offer, sticking with acting. Heavy Metal Kids got back together in 1987 and were last seen in 2015.