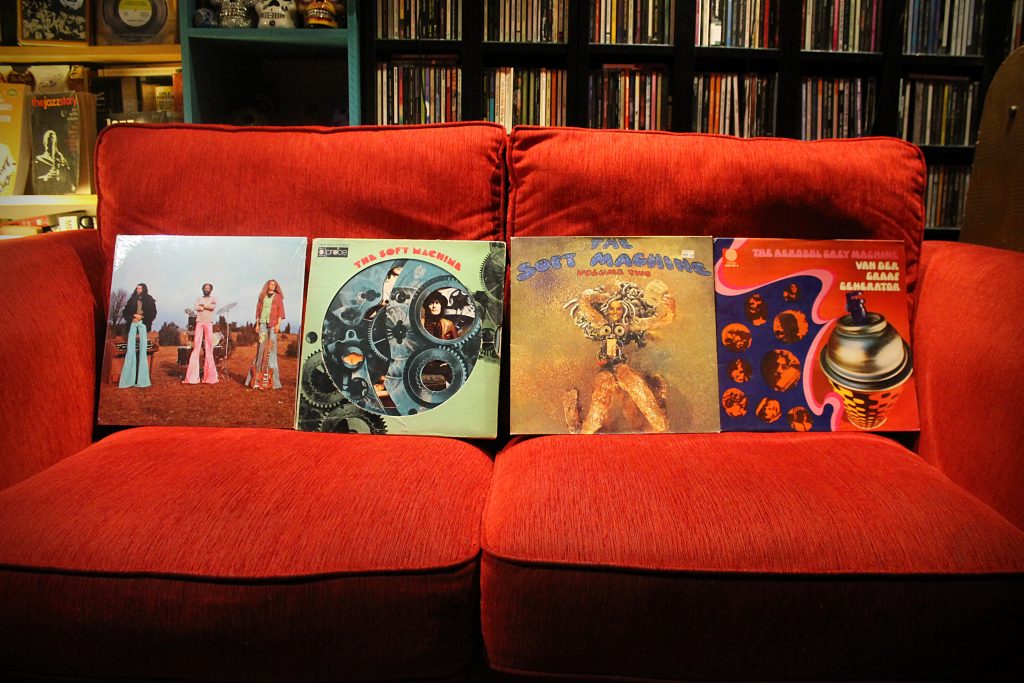 Music today has been challenging and progressive, starting with Exmagma, Goldball (1974). It’s the album that I received today and really whatever the music sounds like, you just have to have it for the cover art. It’s produced by Conny Plank and meanders around some pretty out there experimental improvised Jazz Rock. They were originally called Magma, but when they heard about the French band Magma they just called themselves Exmagma, makes sense. They formed in Stuttgart, two members were German, Andy Goldner (guitars, bass, sax, vocals) and Thomas Balluff (keyboards, trumpet, flute, vocals) with Fred Arthur Braceful an American who’d been in the US military in Germany. He sadly died in 1995 aged 57. There are three albums, this is the second. Original copies would set you back a few weeks’ wages. One of the great things about the resurgence and interest in vinyl is that these kinds of records got reissued.

This inspired me to dig out some Soft Machine albums and this first album from 1969 is really something, it’s both extraordinarily strange and easy to like. Robert Wyatt’s voice and any band that has Wyatt and Kevin Ayers playing together has to be listened to regularly. Kevin Ayers’ spoken word on Why Are We Sleeping, Mike Ratledge’s thundering organ sound. By Volume 2 (1969) Ayers had gone and Hugh Hopper guesting on one track on the first album joined permanently. This is real Jazz Fusion, but by men with bent minds and odd visions, men who saw fascinating shapes in the tangled branches, men who danced under the moon at midnight in strange masks. It was music made by men whose brains were full of knowledge and abandon, simultaneously thinking hard and throwing caution to the wind. Here’s some footage of them on French TV in 1970:

Last album of the night is in honour of the man at the parcel office. Van der Graaf Generator’s Aerosol Grey Machine (1969). It’s a classic from the first track Afterwards. It was originally a Peter Hammill solo album that he decided to turn into a band with Hugh Banton on keys, Guy Evans on drums and the late Keith Ellis on bass who mysteriously died way too early in Germany in 1978 on tour with Iron Butterfly, he was just 32 years old.

I’m a major fan and one night in Canada, the ex band got to play with them, what a wonderful thing that was, hanging out with the three original guys. After their first album they added David Jackson on sax, Olivia and I met him too in Germany at Night Of The Prog when he was playing with ex King Crimson violinist David Cross. What an amazing band VDGG are – buy all the records, sell the furniture. Peter Hammill is one of the great passionate Progressive singers, an influence for Johnny Lydon. (Did you notice the lack of guitars in tonight’s selections?) Check out VDGG here live in 1970 with Nic Potter on grinding bass, David Jackson with the two sax trick, Guy Evans on rolling drums, Hugh Banton on soundscape keys and Peter Hammill on acoustic and brilliant singing!