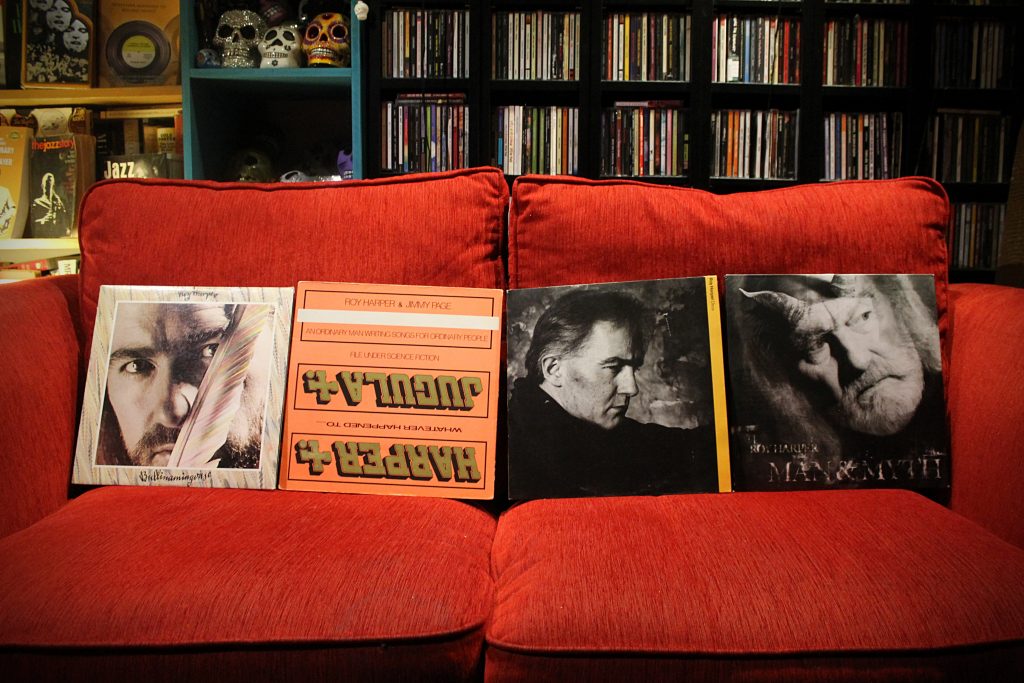 Music today is honouring Roy Harper’s 79th birthday. Born in Rusholme, Manchester, in 1941 he has become one of the English greats with his beautiful songs, his fantastic voice, his evocative lyrics, his acerbic attacks on society’s hypocrisy and his irreverent sense of humour. The other day I suggested where to start by listing ten albums. Well I’ll play some of them tonight. I’ve recently played Stormcock and Flashes From The Archives Of Oblivion. So tonight I’ll choose some more albums from different eras starting in 1977 with Bullinamingvase. The album was called One Of Those Days In England in America after the title track that opens Side 1 and then continues on the whole of Side 2 for 19 minutes (too short). There’s a line before the song gets going about her majesty’s government keeping him out of work, saving him for the job of “rolling spliffs for Captain Kirk”. Paul and Linda are there singing backing vocals with Ronnie Lane on bass and Alvin Lee on guitar.

“One of those days in England with a sword in every pond”, only Roy Harper could have come up with that evocative line. There’s a whole lot of great musicians on the album, Henry McCullogh on guitar, Dave Lawson on keys, John Halsey on drums, one of The Rutles and ex Patto, he also played on Lou Reed’s Transformer. Then there’s a bit of Percy Jones from Brand X, a bit of Jimmy McCulloch, Andy Roberts from Plainsong and BJ Cole, session pedal steel and dobro player, who is on a million famous albums. But in the end it’s always Harper’s wide vision of observation that inspires. One of those moments is Watford Gap where he eviscerates a certain motorway service menu. He was made to take it off all but the first pressing on the album because one of the morons on the EMI board was also part of the company that owned Watford Gap. (I have the first pressing.)

In 1985 Roy finally got to make the album he’s been wanting to make with Jimmy Page playing guitar. Of course Page appeared on earlier Roy Harper albums, but on this one he was actually credited on the front cover along with Roy. Whatever Happened To Jugula? was designed as a Rizla cigarette papers packet with cut out instructions so you could make your own giant version. The album came with a message for the music press on the lyric page:

“Dear Gutter, skip this whole page if you work in the UK music/art/press business as it will be meaningless to you. Bronco”

You can hear Jimmy Page right away on the first track Nineteen Forty-Eightish and after the spoken word, Bad Speech, he’s there on Hope on electric guitar. It actually sounds like a guitar part from one of my ex band albums, actually played by Page but written by Dave Gilmour. (Check out Pete Townshend’s White City Fighting, it’s the same song with Pete instead of Roy in charge of the lyrics and the melody.) Tony Franklin plays bass, it’s around the same time Franklin and Page joined Paul Rodgers in The Firm with Chris Slade on drums.

The album has a lot of thin Ovation guitars, it’s almost like they were taken in by that ‘different’ tone coming from an acoustic. They are very particular, listen to Lola by The Kinks. I used one in All About Eve for one or two songs but they seem rather plastic-y to me. There’s some lovely electric guitar moments on the album though where you remember why you love Jimmy Page, especially on Elizabeth, where there’s just something about those fingers. And that lyric, “It’s time that we joined our hands across our world, it’s time that we joined our hands to save our world”. Again Roy Harper’s song and singing pull it through, heavy friends help, but he doesn’t really need them. The whole album sounds like a stoner’s picnic with lots of laughter leading to thoughtful conclusions.

By 1990 and Once, the title and opening track stars Dave Gilmour and Kate Bush. That Ovation is back, but it’s a lovely song as his songs often are. Vivisection is next in Nowhere To Run To, powerful stuff, Roy is angry, he was always angry about something, generally for good reason. If it’s not the animal cruelty it’s the terrorists and his song The Black Cloud Of Islam might sound like a generalization of the faith, but to me it’s just a plea to stop killing in the name of a supernatural being. In the next song, If, he doesn’t single out a faith as a rule, he questions God in general by suggesting that no god can stand “man to man” – “where’s the love you’re always talking of when you can’t stand man to man”.

Winds Of Change and Berliners get political, the poll tax and the wall. He seems to write despairingly and then returns with hope. That seems to me to be how we all are, disappointed with the world and then trying to be positive. On Sleeping At The Wheel beauty appears in the loveliness of poetic domesticity and love. Love and hope again in For Longer Than It Takes. He finishes with the chorus line from the last track Ghost Dance, “You imagine you can change the world, and you’re right”.

In 2013 Roy Harper made Man & Myth, his first album in 13 years after The Green Man from 2000. Half the album is recorded and co-produced by Jonathan Wilson in LA and the other half by John Fitzgerald in West Cork. Opening track The Enemy talks of different soldiers, men and women. Next, a lovely reflection on the inevitable passing of time in Time Is Temporary. Side 1 ends on this three-sided record with the record’s theme, the contemplation of mortality. In January Man every partner is loosely imagined and every moment of life pondered. This recurring theme that continues into The Stranger might be all a man like this can do. He’s been everywhere else in this long life. He commented on the fact that it had been such a long time since his last album that he “thought he’d retired”. A newer generation of hip young things have rediscovered him, Jonathan Wilson, Joanna Newsom and that has urged him out of retirement. The reviews for this album were glowing. It’s a long way from his relationship with the press in the late seventies and eighties.

In Cloud Cuckooland Pete Townshend plays guitars, it’s an observant political statement about morality and the mistakes the world is condemned to repeat. The album’s longest track, Heaven Is Here, comes in at 15 minutes (his long songs are always too short). An allegory in mythology, you always get the idea that wherever Roy lives, whether it be in ancient Greece or Watford Gap that he’s the scribe that sees through to the truth. It may be trivia or it may be serious, it may be love, it may be death, but he’s always there in the shadows succinctly commenting on behalf of humankind.

The album ends with The Exile (although there’s a little something else at the very end). Is The Exile a song of regret or acceptance? He meanders off in a beautiful vessel of poetry and laughter and now, today, as he reaches his 79th birthday I truly hope that the rumour that another album may possibly be forthcoming is true, because I would surely like this trip to heaven to take a little more time before he crosses over into the inevitable.