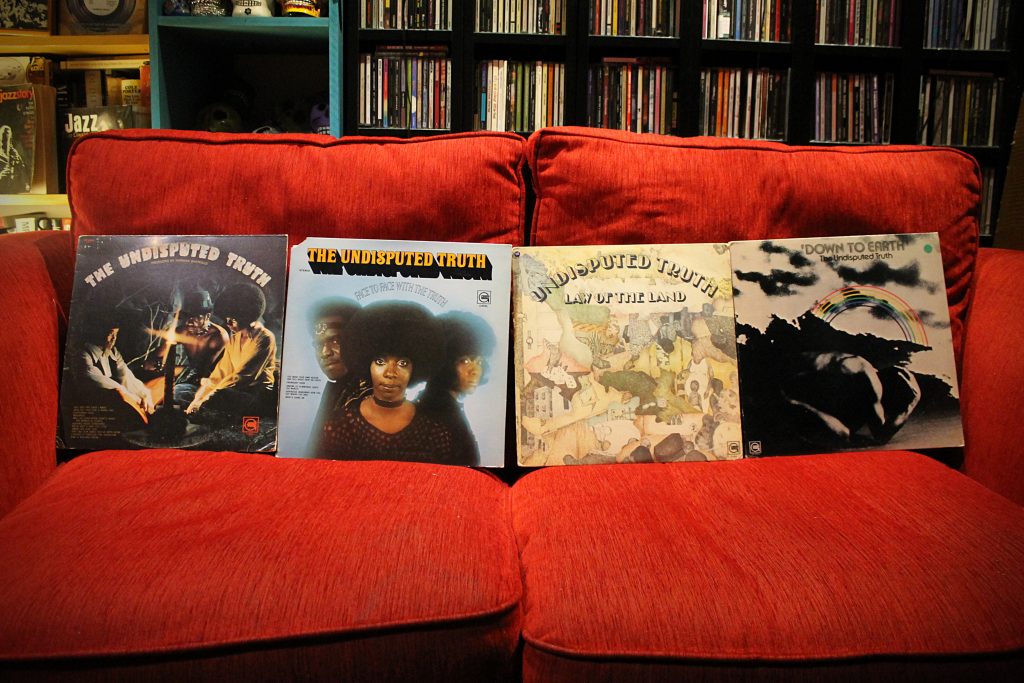 Music today comes from an underrated, little talked about band from the Motown stable, The Undisputed Truth. They were put together by Temptations producer Norman Whitfield as a vehicle for his Psychedelic Soul experiments. Their first album was released in 1971 and had a hit song, Smiling Faces Sometimes, that made it to No.3 on the Billboard chart. They were released on the Gordy label (Berry Gordy was the Motown main man). The song was written by Norman Whitfield and Barrett Strong as were most of The Undisputed Truth songs. Here’s the lyric (in those days they would smile when they lied, these days they don’t even bother to hide it):

The song was recorded first by The Temptations in the same year and East Of Underground, a great Soul band who were all in the military (I just found a CD of this recording). Bobbi Humphrey recorded it in 1972 and Rare Earth on the album Ma in 1973 as did David Ruffin (ex Temptations singer 64-68) in 1974. Joan Osborne recorded it with Isaac Hayes in 2002.

A lot of the tracks on this first Undisputed Truth album (1971) had been recorded by The Temptations first as Norman Whitfield was involved with both bands. He was given the opportunity to work with his own band as producer and songwriter as The Temptations were feeling like his influence was going in the wrong direction as he spent a lot of time working on instrumental sections and payed less and less attention to the vocals in what was essentially a vocal group. The album also has a cover of Dylan’s Like A Rolling Stone and Aquarius, a big tune of the day. It also has great versions of Ball Of Confusion and I Heard It Through The Grapevine.

On Face To Face With The Truth (1972) the pattern was the same with Whitfield and Strong writing most of the material and the songs mostly different arrangements of songs already recorded by The Temptations. I have to say I love this music, it’s moody, soulful, funky, lyrically searching for a better world or drawing attention to injustices and then there’s love. Great performances by the cream of Motown musicians, but even though there’s a picture of the three singing members of the band, everybody is credited except them. Joe Harris, Billie Rae Calvin and Brenda Evans were recruited for the project, it was most definitely Norman Whitfield’s baby.

The third album Law Of The Land was released in 1973, it would be the last album with the original lineup with both Billie Rae Calvin and Brenda Evans leaving. Although the band was having some success, small hits and reaching the Top 20 in the R&B charts they weren’t ever able to equal the success of that first single. Frustratingly on this album they included Papa Was A Rollin’ Stone that they’d released as a single in 1972 to moderate success. Five months later the song was recorded by The Temptations with a different arrangement and it reached No.1 on the Billboard Hot 100 winning two Grammy awards. I guess this was too much for Billie Rae and Brenda. The album also contains Killing Me Softly, released after the No.1 Grammy-winning Roberta Flack version. You never know what’s going to happen with a song. The lyricists were Lori Lieberman and Norman Gimbel with music by Charles Fox. Lieberman released it as a single in 1972 but it wasn’t a hit. Helen Reddy had an early demo of it on her table, she never played it because she didn’t like the title. The album also has a version of Dave Mason’s Feelin’ Alright and The Beatles’ With A Little Help From My Friends. Interestingly the versions of these songs recorded by Joe Cocker are closer to the The Undisputed Truth versions than the originals which I’m guessing were their inspiration rather than The Beatles and Dave Mason. The album ends on a cool version of Walk On By.

The last Undisputed Truth album I’ll be playing tonight is Down To Earth from 1974 (their fourth of eight), it has a new lineup. Joe Harris is still there but then Whitfield expanded the band and took the whole of Detroit group The Magic Tones (Virginia “Vee” McDonald, Tyrone “Big Ty” Douglas, Tyrone “Lil Ty” Barkley and Calvin “Dhaak” Stephenson). It’s the same kinda thing, somehow a little slicker, probably as it’s 4 years later, plus the clothes are getting more crazy. Again, with a new lineup the singers aren’t mentioned on the album cover but the musicians are even though the singers’ pictures are on the cover but not the musicians’. They can’t have been happy about that. The band was having hits, Joe Harris was there from the start and nobody remembers him from this era despite his key role in the band – or do they, how would I know?

If you like the Psychedelic Soul of The Temptations, the Funk of Funkadelic and Parliament and the groove of Sly And The Family Stone mixed together with some good old seventies R&B this is the band for you. Ooh and that bass…