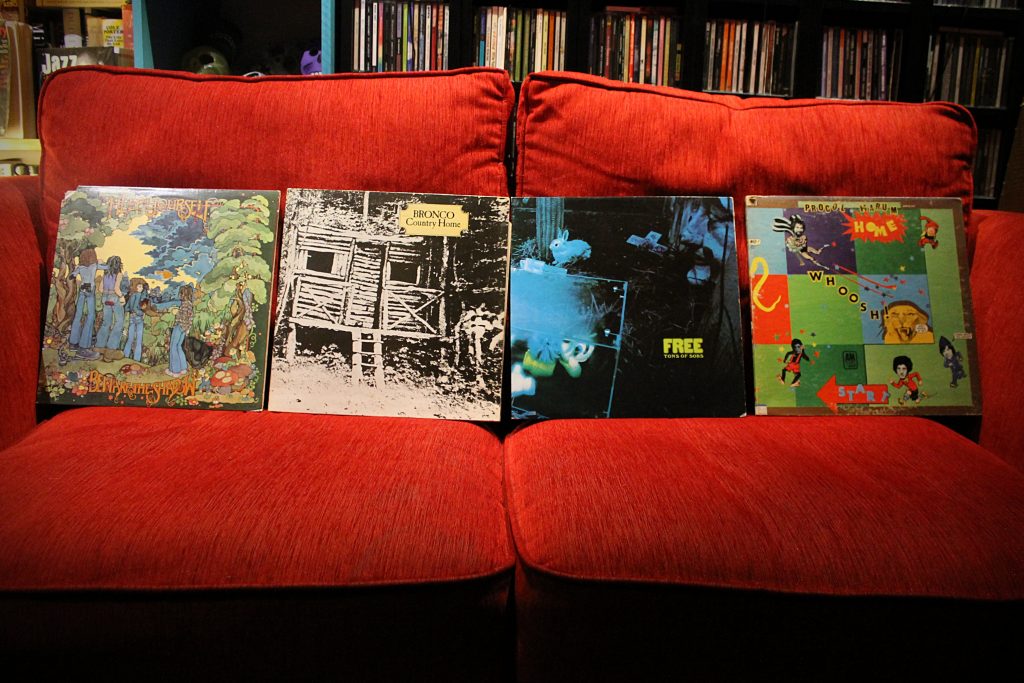 Music today went warm. Help Yourself formed in 1970 in London as the back up band for singer-songwriter Malcolm Morley. To know what kind of music they make take what you will from this unknown quote, “American-flavoured country-rock…to acid-drenched psych”. Seems like quite a leap. Beware Of The Shadows (1972) was their third album and on listening to it I hear great musical moments that I prefer to their more traditional side, but I still like that tinge that makes them eclectic. They remind me of an English Grin (Nils Lofgren), not really countryfied, not really Rock, not really Blues, not really Progressive, but some mixture that makes them both intriguing and unfortunately for them, quite forgotten. The band has an affiliation with Welsh band Man who I’ve written about here before with Morley playing on Man’s Rhinos, Winos And Lunatics, the first album I ever had by them. Man’s Deke Leonard also played with Help Yourself. I’m really liking the second track, Reaffirmation, and American Mother, the third track on Side 2, that typify all these traits all at once and make it all worthwhile for my taste.

Bronco were the same sort of thing, a mixture of all these styles in one. Singer Jess Roden had left the Alan Bown Set and formed Bronco making Country Home in 1970. Robbie Blunt played guitar, he later joined Silverhead for 16 And Savaged (1973), then Broken Glass (1975) with Chicken’s Shack’s Stan Webb and then Robert Plant’s solo band and has worked as a session guitarist since leaving Plant after Shaken And Stirred (1985). Jess Roden made quite a few solo albums, sang with ex Doors Krieger and Densmore on the first Butts Band album (1973) and like many of these warm and musical seventies bands and their personnel, they seem to have disappeared into obscurity. But if you like Free then look out for Well Anyhow on Side 2, really great. These albums are warm treats, trapped in time but overflowing with feeling.

I could only follow this with Free’s Tons Of Sobs (1968). One of the great Blues-inspired Rock bands with one of my favourite guitar players, Paul Kossoff. The genius of this band is their originality despite their influences. Perhaps this is something to do with youth, they were all so young, bassist Andy Fraser was 15, guitarist Paul Kossoff was 17, lead singer Paul Rodgers and drummer Simon Kirk were just 18. There’s an energy, a passion and it always mystified me why later generations abandoned this kind of heart and soul but stuck with the Punk ethic long past its sell by date. I love Free and the loss of Paul Kossoff at the age of 25 is one of the great tragedies. Andy Fraser was one of the unique players that left you stunned by his ideas on the bass (he too has sadly passed away). But when I listen to Paul Kossoff’s playing on Goin’ Down Slow at the age of 18, it floors me.

In 1970 Procol Harum made their fourth album, Home. Apart from a rather dated musical contribution from Robin Trower as the album’s opener (Whisky Train) all the songs bar one are written by singer/keyboardist Gary Brooker with all the lyrics by Keith Reid, whose only role in this band was to write the words. Trower perfected his own ideas later after he left Procol Harum and made a lot of great Rock albums into the seventies with lyrical guitar playing in a power trio and with a fantastic tone, but at this point he hadn’t quite nailed it.

After the mega success of A Whiter Shade Of Pale, a No.1 single in the UK and Canada (Top 5 in the US), they managed to follow it up in the UK at least with Homburg reaching No.6. But luckily for them as the sixties became the seventies it was the time of the album bands and their atmospheric sounds and evocative lyrics sat snugly in that era. I saw them live at the Bottom Line in New York in the eighties or nineties and Gary Brooker’s voice was perfect, I remember seeing Keith Reed in the audience, I wish I’d spoken to him. Home is an overlooked album especially after the wonderful album that preceded it, A Salty Dog (1969). Don’t let the opening track Whisky Train distract you.

In the ex band we had a song called The Dead Man’s Dream on Sometime Anywhere (1994). Here’s the lyric from Keith Reid’s version of the idea, co-written with Gary Brooker composing the music. I have four copies of this album. My French copy is called Whoosh, my American copy has a gatefold with some of the lyrics but not all of them, my Australian copy has a gatefold but no lyrics, my German copy has different artwork and somehow I don’t own an English copy, I must fix that.

As I lay down dying, a floor for my bed
And a bundle of newspaper under my head
I dreamed a dream as strange as could be
Concerning myself and somebody like me

We were in some city, the stranger and me
The houses were open and the streets empty
The windows were bare and the pavements dirty
I asked where I was, my companion ignored me

We entered a graveyard
Searched for a tombstone
The graves were disturbed
And the coffins wide open
The corpses were rotten
Yet, each one was living
Their eyes were alive
With maggots crawling

I cried out in fear
But my voice had left me
My legs were deformed
Yet, I moved quite freely
My head was on fire
Yet, my hands were icy
Everywhere light
Yet, darkness engulfed me

I managed to scream and woke from my slumber
I thought of my dream and lay there and wondered
Where had I been?
What could it mean?
It was dark in the death room
As I slithered under