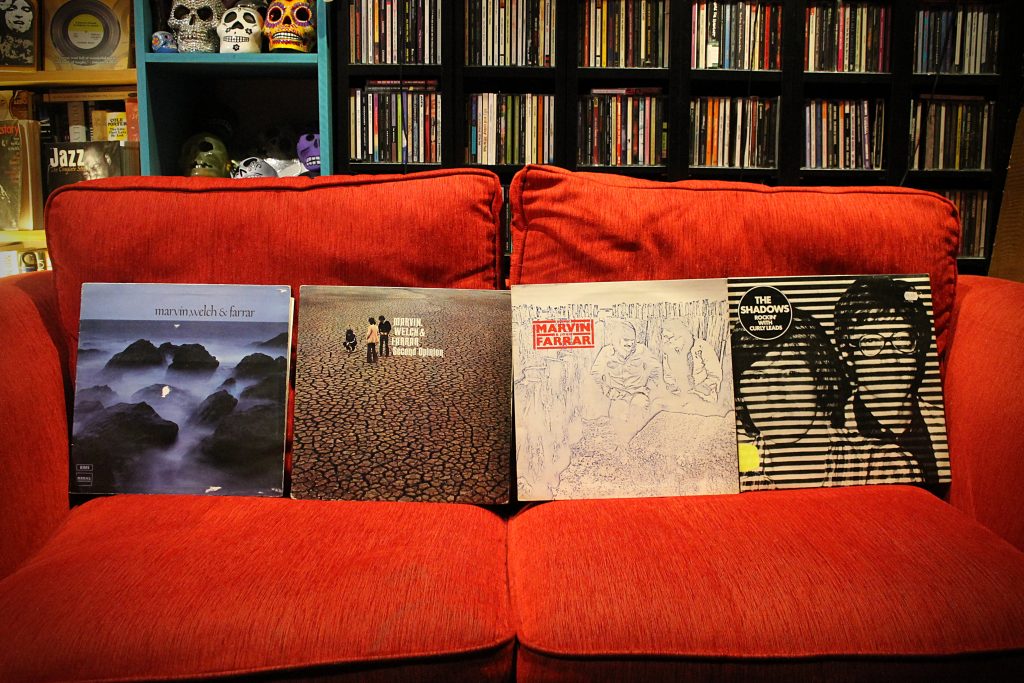 Music today is continuing with great records that no one remembers (apart from in this case my mate Ed Rogers). Today it’s Marvin, Welch & Farrar. Their first album was released on Regal Zonophone in 1971 and was an example of musicians associated with one thing trying something different and succeeding even if the public and the press didn’t notice. Marvin and Welch had of course been in The Shadows and this was a major departure as they became a melodic seventies three piece harmony group. Australian John Farrar had been with The Strangers and had opened up for them in Australia and was asked to join as a third voice. The songs were written by the members individually or collectively and they took it in turns to sing. Session drummer Clem Cattini played drums (Shakin’ All Over, Telstar) and Dave Richmond (Manfred Mann) played bass.

Marvin and Welch craved change, they just wanted to do something different after being in Britain’s top instrumental group and of course the audience wouldn’t have it. Hank Marvin was the lead guitarist and was famous for the tone emanating from his Fender Stratocaster, his playing style as well, his black-rimmed glasses and of course the dance steps. The Shadows were famous in their own right, but they were also Cliff Richard’s backing band and consequently very popular, because Cliff was a big star in the UK. The Shadows had been on the TV a lot with Cliff, they’d been in films with Cliff, galas, live shows, they were famous, too. Bruce Welch was the talented underrated member playing that tricky job in The Shadows of rhythm guitarist. He also co-wrote many songs for Cliff, Marvin, Welch & Farrar and Olivia Newton-John who he was engaged to. The most well-known (there’s a few) would probably be Summer Holiday which he wrote with drummer Brian Bennett.

Marvin, Welch & Farrar released Second Opinion (with Brian Bennett on drums) in the same year as the first album, again on Regal Zonophone (an EMI affiliate), and carried on with the style and the quality of songwriting and singing, but the fans were getting angsty. They finally gave in and started adding Shadows songs into the set. Marvin and Farrar made one more album on EMI proper mostly without Welch, released in 1973, but in the same year all three of them were back together as The Shadows for Rockin’ With Curly Leads (1973). It was their first album since the suicide of bassist John Rostill.

Rockin’ With Curly Leads contains an ill-advised instrumental version of Pinball Wizard as the opening track which must have kept Pete Townshend awake at night. It’s generally without the pizzazz of their sixties recordings. In the same year Mike Oldfield was releasing Tubular Bells and one wonders if they heard it and realized how out of step they were in the instrumental market. There are actually some moments on this record (Gutbucket), but it is mostly middle of the road and intended to appeal to that audience. I was so disappointed that I played it twice and found more in it the second time around.

As happens with most bands that have had a huge success, the audience doesn’t seem to notice that they’re no good anymore (neither do the band). In concert they pray for the old hits and put up with the new songs. I could never understand why mega success led to mediocrity, it should lead to freedom to experiment, if you could afford to do anything, then – you could do anything! It’s not that you shouldn’t play your old songs, it’s that the audience that wants your hits isn’t helping your art. In the case of Marvin, Welch & Farrar, the public won and pushed them back into a faded version of their glory days, another example of the tail wagging the dog and their great vocal albums slipping into obscurity. I was actually starting to like it a bit especially the last track with its dumb title, Jumpin’ Jack Input, but then two cover songs ruin everything with Side 2 of the album, opening with a half-baked version of Heroes and Villains – exactly.