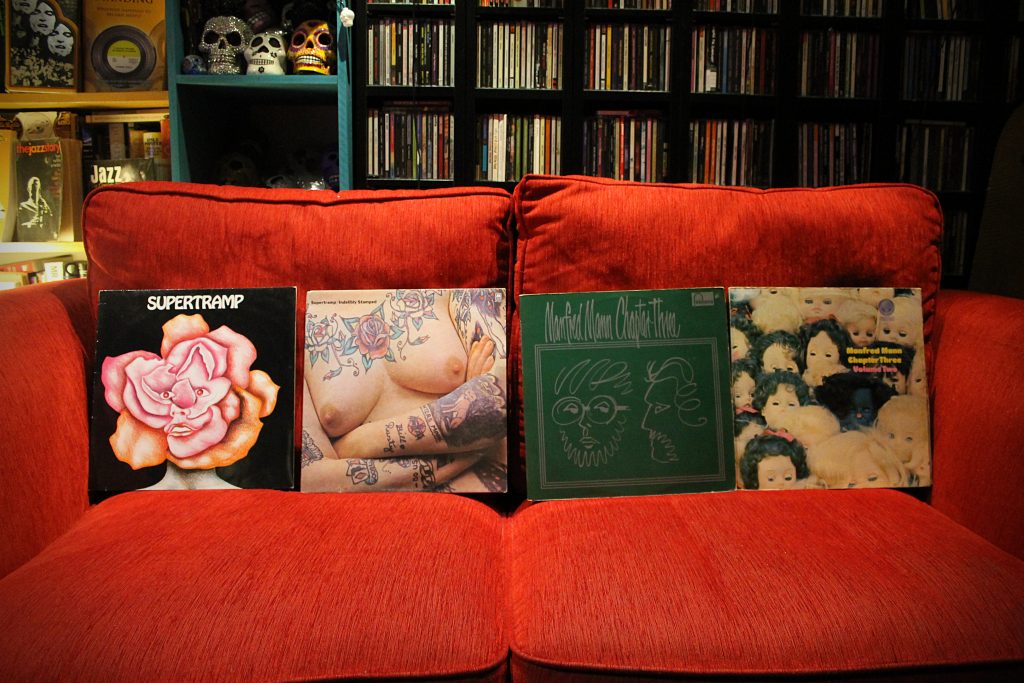 Music today had me intrigued about bands that became huge – but not yet. Supertramp made two albums before the release of their breakthrough album Crime Of The Century in 1974. The self-titled debut arrived in 1970. The band had been put together by keyboard player, singer-songwriter Rick Davies with the financial help of a Dutch millionaire. Multi-instrumentalist Roger Hodgson answered an ad in Melody Maker as did Richard Palmer-James who played guitar and wrote the words for the Hodgson/Davies compositions, and Keith Baker played drums (he also made one album with Bakerloo). Baker left before the first album, but eventually found himself in Uriah Heep. It was Robert Millar that played drums on this first album. These seedling albums before mega success are fascinating, because you can hear the sound of success in a record that wasn’t successful. There’s lots of falsetto vocals and meandering musical sections which I like and I guess other people don’t. As the band became less Progressive and more Pop-orientated they became less interesting. It might be hard for you to put ‘interesting’ and Supertramp in the same sentence, but once they were just that.

By the second album, Indelibly Stamped (1971) with its unlikely artwork, Palmer-James and Millar were gone, replaced by Kevin Currie on drums, Frank Farrell on bass and piano and Dave Winthrop on flute and sax. Later, Palmer-James wrote the lyrics on three King Crimson albums, Larks’ Tongues In Aspic (1973), Starless And Bible Black (1974), and Red (1974). A different lineup and a different songwriting arrangement with Hodgson and Davies writing their own words and composing songs separately saw a change in direction abandoning the Progressive melancholia of the first album. The songs are weaker, the guitar isn’t as good and neither are the words (Palmer-James was a better guitarist and a better lyricist than Davies and Hodgson at this time). That’s most likely why the band became so affiliated with keyboards, although Hodgson played guitar he wasn’t really a guitarist.

There’s a note in the album cover that suggests that the second track, Travelled, is more similar to the songs on the first album than any other track, but I can’t hear it. This album sounds like they are more on their way to ‘songs’ and less attention paid to the instrumental section arrangements. That’s just what I like about Crime Of The Century, how the songs are strong and the instrumental passages are also strong, integral, it’s what makes that album so good.

Indelibly Stamped sold worse than the first album, but in those glorious days lack of success didn’t mean you got dropped. Labels stuck with you and in the case of Supertramp the label’s faith was rewarded with a band that would go on to sell 60 million albums in their career.

On the demise of Manfred Mann the Pop group there had allegedly been an attempt to form Manfred Mann Chapter Two with vocalist Mike d’Abo, but that hadn’t worked out. (d’Abo had replaced original singer Paul Jones.) The more experimental Chapter Three (1969) saw original drummer Mike Hugg become the lead singer and piano player. Mann played organ, Steve York was on bass, Craig Colling on drums and Bernie Living on sax and flute. They toured with a brass section, this version of the band with elements of Progressive and Free Jazz was a huge departure – and I really like it. There’s some other connection in there to Dr. John that Hugg is channelling in the vocals – odd.

The second album Volume Two (1970) with the creepy doll cover follows the same pattern. After listening to the first album and now the second, Mike Hugg’s vocals are really very weird. If the album was just the instrumentals then it wouldn’t be so odd, but the vocals take this record to another place completely. He’s not really a singer. It’s like somebody had to do it, but because of that, the record doesn’t have the sound of established artists executing their skills. It adds an element of chance in between the competence of the musicians and it’s much better that way. But there’s some great jazzy instrumental section. Good luck finding vinyl copies of these albums. I have a New Zealand and an Australian copy of Volume 2 and an American, Australian and English copy of Volume 1 (US has a different cover). It’s so cool collecting different versions of the same thing. There was another album recorded and not released and it seems that you can find some of these tracks on a compilation CD from a series called Radio Days Volume III. Please check this band out, nobody else will ever tell you to.