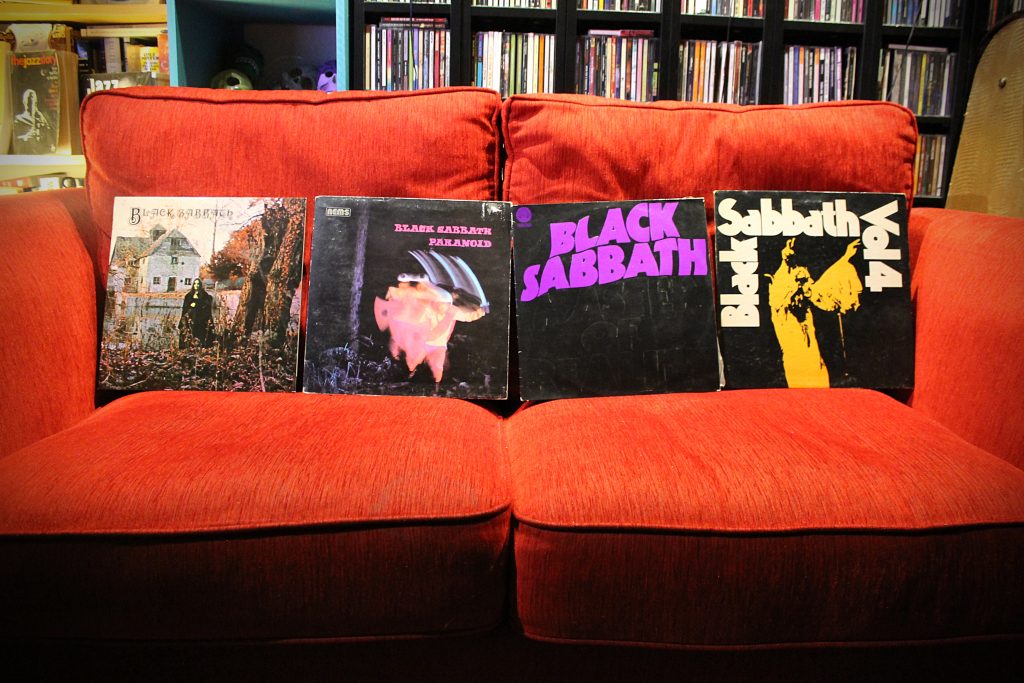 Music today came out of the mist and I found myself with my hands on the first Black Sabbath album (1970). I wonder if parents really thought this music was evil when they first heard it blaring out of the kids’ bedroom? Imagine what Mum and Dad thought of the name, Black Sabbath, and the dastardly devilish deeds that the band members got up to as they were corrupting the children. The long hair, the mysterious album covers and that goddamn noise. My parents used to say to me, “You can’t hear the words”. If they only knew what a cuddly creature Ozzy actually was, nuts, but cuddly. It’s surprising how these albums have endured. The first album is 50 years old and people still listen to it and love it. It’s simple, it’s Ozzy’s voice and Tony Iommi’s characterful guitar. “My name is Lucifer please take my hand,” Ozzy sings. I love how the devil is polite in Sabbath songs. What the parents didn’t understand was it was all a bit of fun, like Vincent Price, Peter Cushing and Christopher Lee, horror with tomato ketchup and plastic vampire teeth. I promised myself I wouldn’t write about all the individual songs, uh oh…

On the second album Paranoid (1971) War Pigs has drummer Bill Ward and bassist Geezer Butler marauding through the speakers, anchoring Iommi’s thick riffs with Ozzy off again into Satan’s lair. It’s noise, but it’s perfect noise and Ozzy manages to make even the darkest of deals with the devil joyous, melodic, accessible. There’s no guest list for this party, everyone is welcome and to prove it the next song is the title track, and who doesn’t love that, accessible psychosis, free relief from the pain in a memorable riff and an odd drum beat. The Psychedelic Planet Caravan follows – it wouldn’t be out of place on Satanic Majesties or A Saucerful Of Secrets, or even a Tyrannosaurus Rex album. But then the Japanese Godzilla movie companion song Iron Man comes blaring out of the speakers, scary and as entertaining as an episode of Lost In Space and as cute as Will Robinson.

Side 2 opens with Electric Funeral, riffs, thick Gibsons, long-haired music, it’s like treacle. Hand Of Doom sounds like The Doors, really it does. Rat Salad steams in and there’s that timeless feel and sound that a million Metal bands got from this band, none of them as good. Fairies Wear Boots showcases Bill Ward’s perfect drumming, appropriate, clever, but not too clever, clever enough, real animal from Sesame Street stuff, mad, unpretentious, Birmingham boy unleashed, if he wasn’t doing this he’d be banging on the pipes in his mam’s house, “Yeah fairies wear boots, you gotta believe it”.

Oh that repeating cough on Sweet Leaf, the opening track on Master Of Reality (1971), what a riff and the next one, After Forever. I’m really trying not to mention every song, but the riff and Geezer Butler’s bass is great on this one. I love the way that they overdubbed solos, double-tracked the vocals, had guitars duelling with themselves, but when it came to live shows they just turned up and let go and nobody noticed. Led Zep did that too, there was never going to be a second guitarist in that band, even though the songs had rhythm guitars, riff guitars, lead guitars. Iommi and Page were going to carry the whole thing live and they did. On Into The Void, the last track, there’s that sound again, the sound that launched a thousand riffs.

Black Sabbath Volume 4 (1972) was my real introduction into the band, because I saw that tour at Liverpool Stadium in the mid-seventies. It was amazing and although I’d heard earlier albums this was the one they were touring. I remember the support bands too, Badger and Necromandus. I remember I bought a poster at the gig, it was huge, it had all three bands’ names emblazoned across it. My parents threw all my memorabilia away when I was out travelling, posters, programmes, everything, just tragic. The music lives on, the albums are still in my collection and really, without trying to mention every track from Wheels Of Confusion to Under The Sun, these songs are branded into my brain…Supernaut!! But so are The Beatles’ songs, I was blessed with not having to abandon one style for another, one era for another. I may have had phases of getting into certain things more than others, but I simply kept records in the shelf until the feeling came back again for whichever style suited the mood, it could never be just one thing. That’s why Noctorum albums are eclectic.