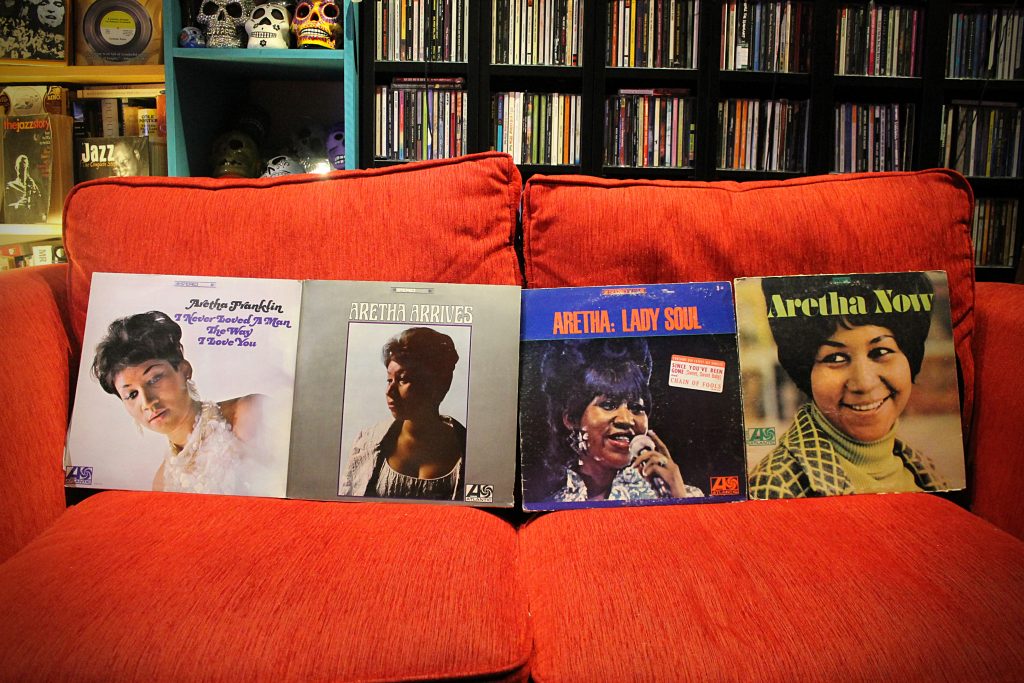 Music today comes from the perfect Soul pipes of Aretha Franklin. I Never Loved A Man The Way I Loved You (1967) featured the Otis Redding penned Respect as the opening track which became her signature song and helped catapult the album to the No.2 spot in the US charts. The album also has two Sam Cooke songs on the record, Good Times and Change Is Gonna Come – she was a great interpreter of Soul songs. Although it seemed to set the Soul audience on fire, back in the day the critics were less enthusiastic, Rolling Stone gave it a bad review, time put paid to that opinion. When you consider that this classic and first release on Atlantic Records, I Never Loved A Man The Way I Loved You, was in fact her 10th album, it seems like she took a long time to get going having made 9 albums with Columbia that skirted around the 100s in the charts. Ultimately in her career Franklin had some impressive stats – from Wikipedia: 112 charted singles on Billboard, including 77 Hot 100 entries, 17 top-ten pop singles, 100 R&B entries, and 20 number-one R&B singles.

Her follow up album Aretha Arrives released in the same year (1967) opened with The Stones’ Satisfaction, but it was the single Baby I Love You that made it to No.4 on the US chart and sold a million copies. Franklin would become known as the Queen Of Soul. You gotta have your Soul party hat on to dig these vibey sixties Atlantic records, but she could belt out a ballad too. She released three albums in 1967 alone and then two a year till 1972 with a regular output through the seventies and eighties, this lady was prolific.

It was on Lady Soul (1968) that she sang another song that would be associated exclusively with her, Carole King and Gerry Goffin’s (You Make Me Feel Like) A Natural Woman from an idea suggested by Atlantic’s Jerry Wexler. It was specially written for her and reached No.8 on the US chart. The album also features Curtis Mayfield’s People Get Ready and The Rascals hit Groovin’, written by Felix Cavaliere and Eddie Brigati.

Aretha Now was her second album released in 1968 and that too had songs that she made her own, Think (US No.7) and I Say A Little Prayer. Think was written by Franklin and her first husband, producer-manager Teddy White. I Say A Little Prayer was a Bacharach/David song which was originally a hit for Dionne Warwick, but it wasn’t long before Franklin released it, too, both reaching No.4 in the UK and Top Ten in the US. The album also features another Sam Cooke classic, You Send Me.

Whenever I listen to Soul music, the groove, the singers, the warm skillful easy expertise, I always feel the euphoria of talent and heart.