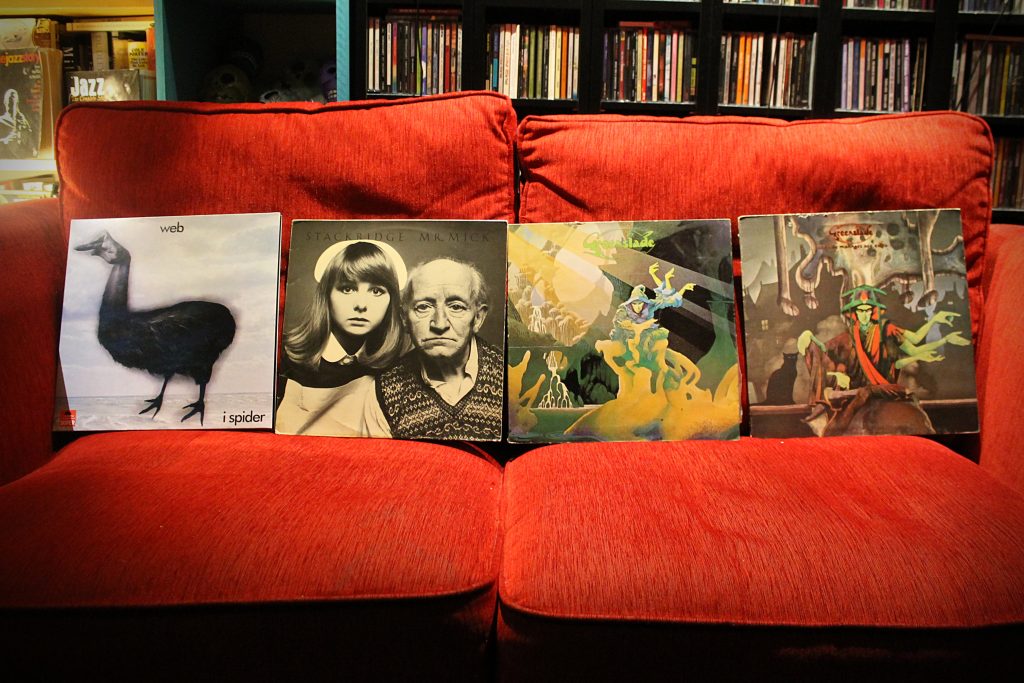 Music today is revolving around the arrival of I Spider by Web, released in 1970. The band features keyboardist/vocalist Dave Lawson who later joined Greenslade. The band is really The Web who made two albums in the sixties with Lawson taking over on vocals from John L. Watson as their style changed and they went in a more Progressive Jazz direction.

They then became Samurai releasing one album and in 1972 Lawson joined Greenslade where he stayed for four albums. He also played on the last seventies Stackridge album Mr. Mick, released in 1976. His story is long and most people have never heard of him.

I Spider is a typical 1970 album of both complex, proggy, experimental, jazzy and catchy tunes. I love records like this, because no one dares to make them anymore, they have no aggression, no gratuitous showboating, but are made by talented, technical musicians with feel, a sense of humour and who were inspired and stimulated throughout the whole process.

Mr. Mick was the catalyst for the end of Stackridge, it didn’t do as well as expected, the record that came out wasn’t the one that the band wanted. This version has a reggaeish version of The Beatles’ Hold Me Tight, but despite the problems and the issues the band may have had, it’s a lovely album. On Spotify or on CD you can hear how the band wanted it. Poetic, melodic, West Country fare and appropriate as our drummer Ed has played with later incarnations of the band. The instrumentals are gorgeous and the concept, the lyrics, the cover art, give it a listen, I’ll say no more about it, but this should introduce you to their classic earlier albums. Dare and I saw them at Liverpool Stadium in the seventies.

Greenslade’s first album was released in 1973, a keyboard-heavy Progressive trip that was the underground music of the day, but again it was catchy. Dave Greenslade (keys) and Tony Reeves (bass) had been in Colosseum and wanted to form a band with two keyboards and invited Dave Lawson (who was struggling in Samurai) and drummer Andrew McCulloch who had played on King Crimson’s Lizard. (If you read a previous post, he also played on one track on Manfred Mann’s Chapter Three, Volume Two.) If you like your Prog, this is the album for you, all four albums they released are progtastic, but I only have time for two of them tonight. Bedside Manners Are Extra, their second album released in 1973, is their most well-known. After these two albums, guitars were introduced for Spyglass Guest (1974) and Time And Tide (1975). (They reformed in 2000 for Large Afternoon.) The cover art was by Roger Dean, what could go wrong? Go Prog Crazy!!!