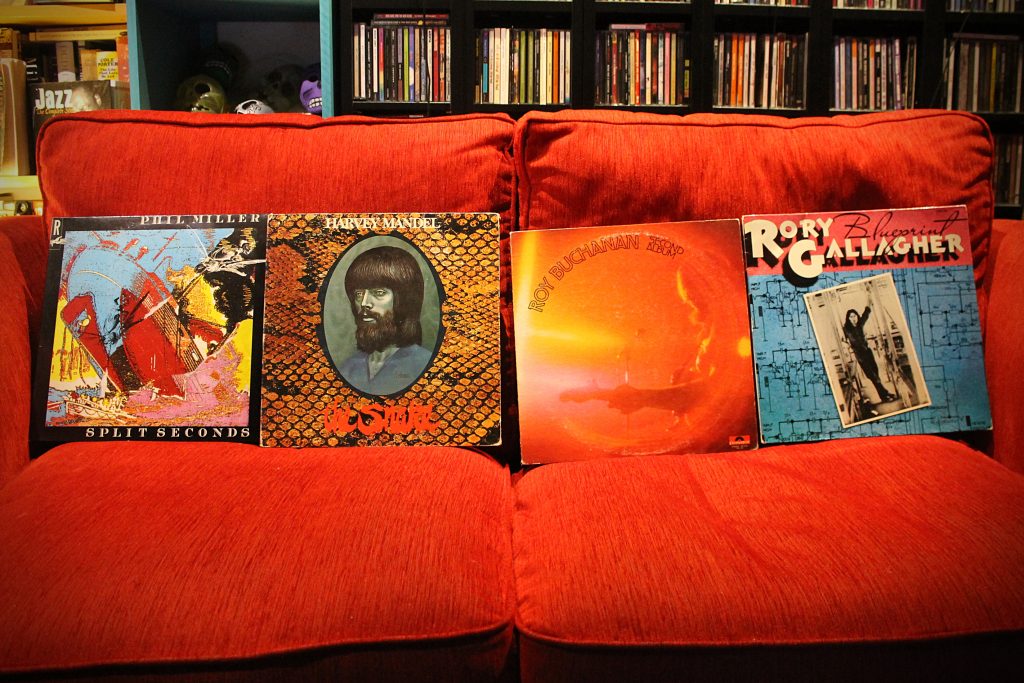 Music today started with an album that seems quite hard to find. Phil Miller’s Split Seconds (1988). Miller was in Robert Wyatt’s Matching Mole and was part of the Canterbury scene, later a member of Hatfield and the North and National Health. It’s mainly a jazzy-ish, progressive-ish, eighties-ish guitarists album with one vocal track sung by Richard Sinclair from Caravan, famed Canterbury sceners. Phil Miller died of cancer in 2017, he was 68 years old.

Harvey Mandel’s fifth album The Snake was released in 1972 on Janus records. Mandel had played with John Mayall, Canned Heat, and would later appear on the Stones’ Black and Blue (1975). He was a potential replacement for the departed Mick Taylor with Roy Buchanan and Ronnie Wood. His albums are mainly instrumental and show off his tone and style. He’s not fast, he’s warm, although he was one of the first guitarists to use the tapping technique on his later releases. This album features Sugarcane Harris with whom he formed the band Pure Food And Drug Act. Also featured are Canned Heat drummer and bassist Fito de la Parra and Larry Taylor. Paul Lagos ex (American) Kaleidoscope drummer and Victor Conte ex Tower Of Power bassist also appear. You can’t go wrong with a Harvey Mandel album and there’s a few. Note: David Lindley, who played on Starfish, was also in Kaleidoscope.

Roy Buchanan’s second album, called, you guessed it, Second Album, was released on Polydor in 1972. Buchanan, famous for making a Fender Telecaster wail also played on the Stones’ Black and Blue. I’m not a Blues player, I don’t know the licks, the scales, it’s not a style I wish to play, but as far as tone and expression I can appreciate it in the giants of the genre, Paul Kossoff, Rory Gallagher and Roy Buchanan to name just three. Buchanan’s tone is so special, his choice of notes, his volume knob control and his sometimes mad passionate explosions that his guitar gave us makes his fans miss him greatly. He died in a prison cell after being arrested in a domestic dispute, he was found hanging by his own shirt when checked the following morning. He was just 48 years old.

Rounding off the night with Rory Gallagher’s Blueprint, also released on Polydor in 1973. It was his fourth album (third studio album) after Live in Europe. It was the first album with new drummer Rod de’Ath and keyboard player Lou Martin after the departure of original drummer Wilgar Campbell. Rod de’Ath died in 2014 aged 64. Lou Martin died in 2012 aged 63. Campbell, who was also in Andwella’s Dream (I played one of their albums recently), died at age 43.

Song Of The Day is a short video documentary about Rory Gallagher from 1973 with Gerry McEvoy on bass and Rod de’Ath standing in for Wilgar Campbell on drums. In the video you can see what a sweet guy Rory was, shy, humble, but a great guitar player. He died at the age of 47 after a liver transplant, damaged by paracetamol and alcohol.