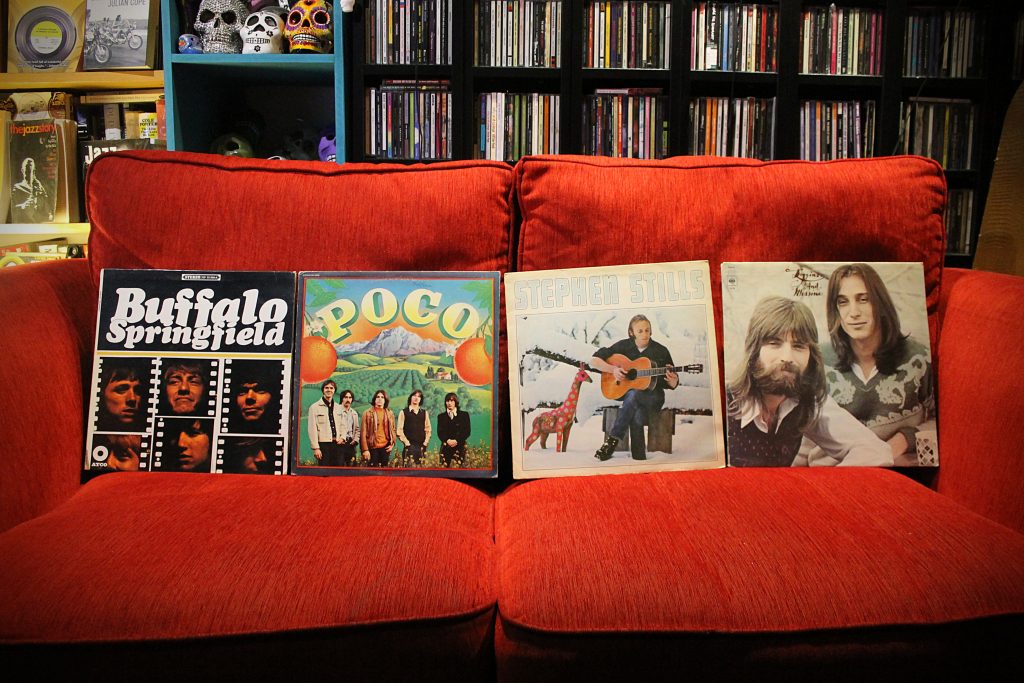 Music today had me running screaming to the sixties for inspiration and I found it with Buffalo Springfield and their first self-titled album released in 1966. Songs are written by Stephen Stills and Neil Young who both play lead guitar. Richie Furay plays rhythm guitar, Bruce Palmer bass and Dewey Martin drums. The band were only together for two years and three albums with bass player Bruce Palmer only playing on one track on their third album replaced by Jim Messina. Palmer who was apparently continually getting arrested for drug possession made a mad solo album in 1970 (or 1971 depending on who you ask) called The Cycle Is Unbroken reviewed here by Julian Cope.

They were considered a North American band as Furay and Stills were American and Palmer, Martin and Young Canadian. Their first single was Neil Young’s Nowadays Clancy Can’t Even Sing which I covered for a Buffalo Springfield tribute album. But it was the second release, Stephen Stills’ For What It’s Worth, that became a major hit. The band is considered Folk Rock, a bit like The Byrds, Beatles influences and sixties Pop and with Messina and Furay going on to form Poco and with the emergence of Country Rock the influence of these people was great. You know what happened to Stills and Young? Dewey Martin died in 2009 aged 68. Bruce Palmer died in 2004 aged 58.

I don’t have Poco’s first album (Pick Up The Pieces) but I have their second, Messina and Furay are there on guitars with George Grantham on drums, Rusty Young on pedal steel and Timothy B. Schmidt on bass. Eagles’ Randy Meisner had been in the first incarnation of Poco but some shenanigans had him leave. They took his pic off the painting on the cover art and replaced it with a dog. They kept his bass but erased his lead vocals, nice. The multiple harmonies and the West Coast feel saw them develop into a popular seventies American touring act. This album has some great instrumental sections, too. I haven’t played it for years and was surprised at how good it was. Side 1 has six songs, Side 2 “Nobody’s Fool/El Tonto de Nadie, Regresa” is one 18 minute song…great! Meisner’s dispute with the band might have been forgotten as he went on to form a band called Eagles and mainly wrote (with help from Frey and Henley) million seller, Take It To The Limit, which he also sang.

Stephen Stills’ solo album was released after the success of his post Buffalo Springfield band, Crosby, Stills & Nash (1969) and Crosby, Stills, Nash and Young’s Déja Vu (1970). It features one of his most famous songs, Love The One You’re With. A big success, it reached No.3 on the Billboard chart. To A Flame and We Are Not Helpless features ‘Richie’ on drums, aka Ringo Starr. Crosby and Nash, John Sebastian, Booker T. Jones and Dallas Taylor also appear along with both Jimi Hendrix and Eric Clapton. It’s a very soulful album and is dedicated to James Marshall Hendrix who had died just two months before its release.

There was of course a time when West Coast music hadn’t yet become bland Yacht Rock, they made real albums, American style, harmony style. Their second self-titled album from 1972 was when they became an official duo and became the sound of an era. They went on to sell 16 million albums through the seventies, but at that point Kenny Loggins had great hair and an amazing beard, it all went wrong when he started to trim. Jim Messina had replaced Bruce Palmer in Buffalo Springfield and then formed Poco with Richie Furay, but Messina was happier in the producer/engineer chair and left Poco after four albums. Messina and Loggins together were the kind of chemistry that I was talking about earlier, sometimes it just happens. The style of music is irrelevant, it’s whether it works in the context of the style you are in and for these two it absolutely did.