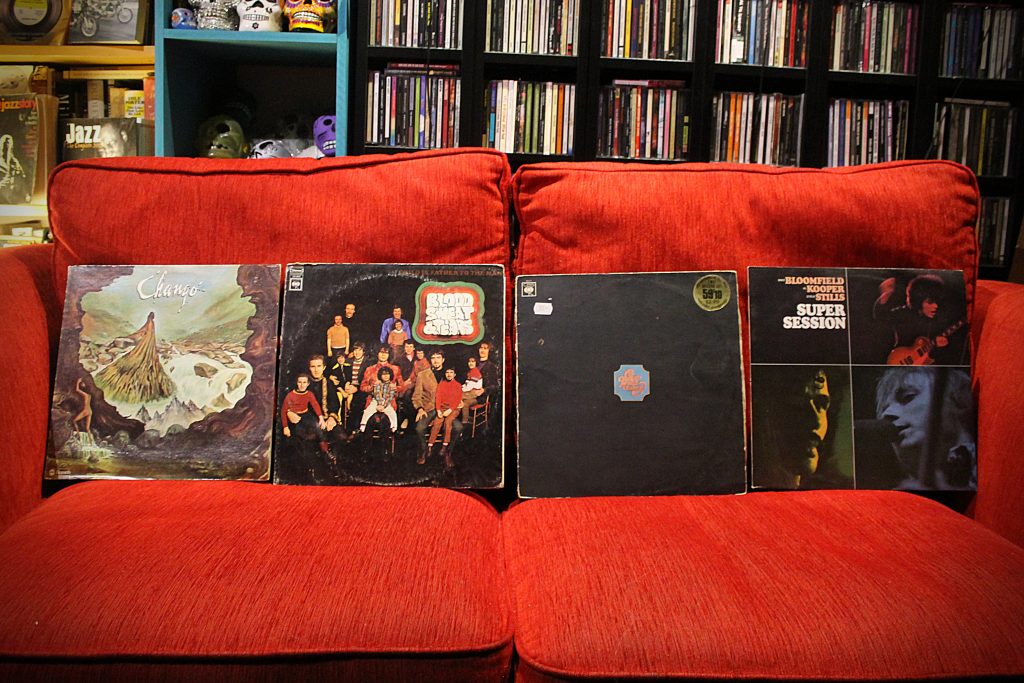 Music today was a bit of a smash and grab. I have a whole lot of records to put away, records that had been hiding in a shelf because they needed listening to to authenticate their genre. So I picked up the first Chango album (1975). It’s Salsa Rock a la early Santana. If you like early Santana you will like this. I read a dumb review of it on AllMusic, calling it good, but plagiarism. Every era has bands that sound like their era, every genre has bands that sound alike within their genre, it doesn’t mean it’s plagiarism. Did you ever listen to Metal bands? Punk bands? Reggae bands? Jazz, Blues, really it’s nuts to call it plagiarism. It’s great, it’s like Santana and it’s great. The only reason the reviewer called it plagiarism is because there were fewer bands in this genre.

This led me to the first Blood, Sweat & Tears album, Child Is Father To The Man (1968), with its disconcerting cover art. The band was formed after The Blues Project members Al Kooper and Steve Katz formed a band that had horns and incorporated Jazz, Blues, Soul, Psychedelia, Rock, you name it. It’s a great debut album but Al Kooper left after its release as Katz and drummer Colomby wanted to get a stronger lead singer. Kooper had famously played on the legendary Dylan sessions and went on to make solo albums and produce. They could not however have guessed that after his departure and with the inclusion of David Clayton-Thomas on vocals that they would become absolutely massive, but that’s another story. This album that includes Tim Buckley’s Morning Glory, Nilsson’s Without Her and Randy Newman’s Just One Smile plus six Al Kooper songs is an absolute must have for your collection.

Blood, Sweat & Tears led me to the debut album by Chicago, Transit Authority (1969). It’s another classic incorporating brass into a rock band. Sometimes jazzy, sometimes Psychedelic, sometimes soulful, sometimes Rock. It features Terry Kath on guitar, allegedly Jimi Hendrix’ favourite guitarist. (Wait till you hear Free Form Guitar.) It’s a double album, as was Chicago II (1970) and Chicago III (1971). Their fourth album was a quadruple album, Live at Carnegie Hall (1971). It wasn’t until their fifth album, Chicago V (1972), that they released a single album. The debut features the classic single Does Anybody Know What Time It Is? that reached No. 7 on the US charts. Interestingly it wasn’t released as a single until two songs from their second album, Make Me Smile (No. 9) and the brilliant 25 Or 6 To 4 (No. 4) had become hits. This album also features Steve Winwood and Spencer Davis’ I’m A Man…and there’s Side 4, an amazing debut album. On a sad note allegedly Terry Kath’s last words were, “What do you think I’m going to do? Blow my brains out? Don’t worry. It’s not loaded…” before accidentally shooting himself.

Al Kooper and Mike Bloomfield had played together on Dylan’s Highway 61 Revisited. Kooper had left Blood, Sweat & Tears and Bloomfield was leaving Electric Flag. Kooper booked two days at the studio and invited Bloomfield down to jam. Day 1 went swimmingly with three tracks credited to the two of them, one to Curtis Mayfield and another to Mort Shuman and Jerry Ragovoy (Ragovoy wrote Time Is On My Side made famous by The Stones and Piece Of My Heart made famous by Janis Joplin). Shuman co-wrote Sha-La-La-La-Lee for The Small Faces and Little Children for Billy J. Kramer. He co-wrote Here I Go Again with Clive Westlake for The Hollies. He also did the translations of the Brel songs recorded in English by Scott Walker.

So it was a successful day in the studio but the next day Bloomfield failed to show up. So he called Stephen Stills who had just left Buffalo Springfield and that’s why this album has Bloomfield on one side and Stills on the other. They recorded Dylan’s It Takes A Lot To Laugh, It Takes A Train To Cry, Donovan’s Season Of The Witch, Bluesman Wille Cobbs’ You Don’t Love Me and Harvey Brooks’ (the bass player on the album) Harvey’s Tune. You may wonder who Harvey Brooks is. Well look here and be impressed. Both he and Barry Goldberg were members of the Electric Flag at the time. The drummer was session man Fast Eddie Hoh. The album did extremely well much to the disappointment of Mike Bloomfield who had apparently put a lot of faith and work into the debut Electric Flag album, A Long Time Comin’ (1968). It was recorded over six months and reached No. 31. Super Session was recorded over two days and reached No. 12 going gold.