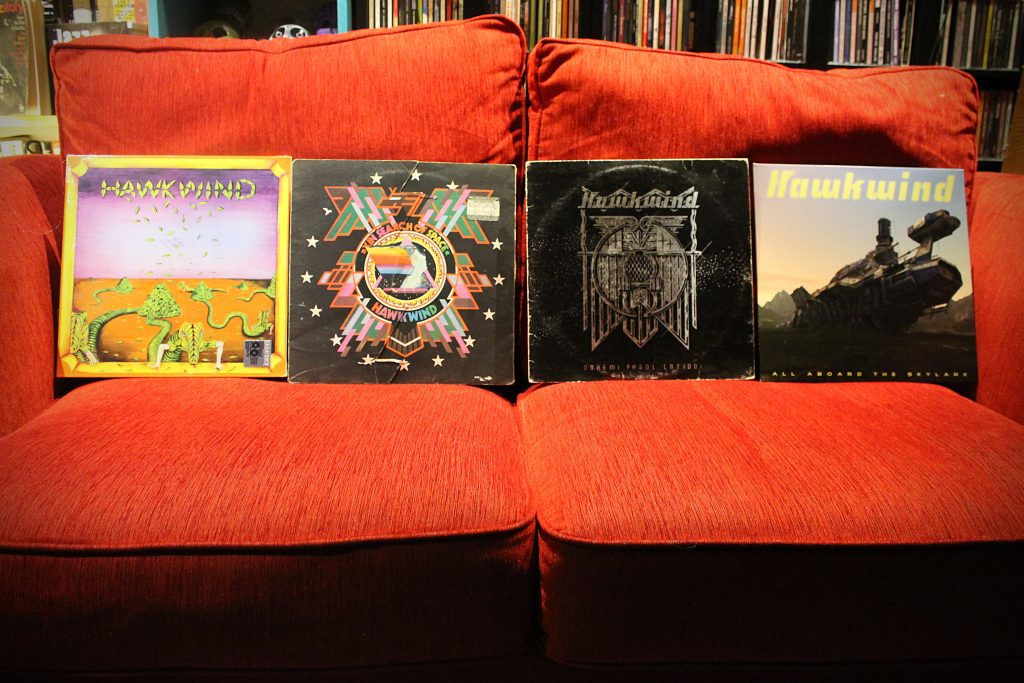 Music today has been inspired by the cosmic experience of working on the Jerome Froese project. So I decided to go Hawkwind crazy and only play Hawkwind albums tonight, oh what fun. I started with In Search Of Space from 1971, an album Dare and I and other members of our first bands would listen to all day in the early to mid-seventies. It’s a Space Rock classic and we used to play the track Master Of The Universe in our eternal rehearsals just because we liked it. I saw them live in the mid-seventies at Liverpool Stadium with Lemmy playing bass.

By the time I saw them, Terry Ollis on drums and Dave Anderson on bass who played on In Search Of Space, were gone, Lemmy and Simon King were in on the next album Doremi Fasol Latido (1972). It features the classic Hawkwind song Brainstorm written by Nik Turner who was always wailing on his effected sax, playing flute or singing. Lemmy sings The Watcher and mainman guitarist/singer Dave Brock sang and wrote the other songs including Lord Of Light that in a crazy experimental band Mercator Projection (I think) we played live at The Basement in Sydney to a shocked audience. Earlier in the year Hawkwind had managed a surprise hit with Silver Machine reaching No.3 in the UK chart in 1972 – sung by Lemmy.

Various musicians appear and disappear in Hawkwind’s history. Noise maker Dik Mik had gone by the next album Hall Of The Mountain Grill (1974), replaced by ex High Tide and Third Ear Band violinist and Mellotron man Simon House. Del Dettmar had gone by Warrior On The Edge Of Time (1975). Only Dave Brock and Nik Turner appeared on the first self-titled album (1970), which is somehow different to the following records. Space Rock might not have even been a term when this one came out, it was just freaky music from the underground. It was produced by Dick Taylor from The Pretty Things, but that might have meant he told the engineer to press record and sorted it all out later. I really love these three albums.

Also tonight I played their last album, All Aboard The Skylark (2019), which seems like a massive return to form. I really lost them after 1982 and have occasionally dipped into releases since then. The thing with Hawkwind is that you have to buy into it, like everything I suppose, like God! I saw them at Night Of The Prog a couple of years ago and they sounded like a Punk band. I haven’t even played all of the records that I love by them tonight and I wouldn’t be surprised if you loved their thing too, although I would never recommend them, it would be like recommending ice cream to a seagull.