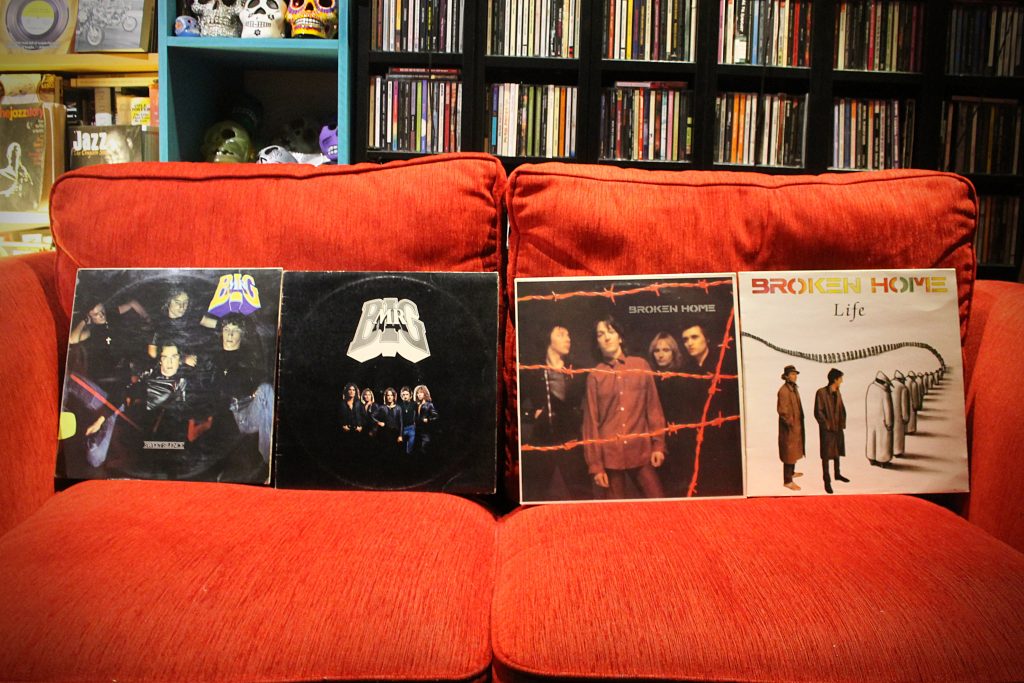 Music today was inspired by a trip to the greengrocers, but not by a vegetable, so not Green Day or Steve Hillage’s Green or REM’s Green or The Smithereens’ Green Thoughts, or Greenslade or even Candlewick Green or even Hughie Green, but by a song that was being played on the radio – Romeo. You had to be around in England in 1977 to remember this band and this song and you can’t confuse them with the American band of the same (dumb) name, Mr Big. How can two bands think that this is a good name? (Well in the case of the English Mr Big, it was their manager who made them do it, they were actually called Burnt Oak before.) I have two of their albums that were released in the UK and the US compilation of those two albums. There was a third album, Seppuku, that remains elusive.

Their first album Sweet Silence (1975) is a great mixture of Queen, Heavy Metal Kids and Bon Scott, part Glam, part seventies, part Rock. In fact Mr Big were Queen’s support on the A Night At The Opera tour. I can imagine they were a big success. Lead singer, guitar player and songwriter Dicken (aka Jeff Pain) screeched his way through this album but had the vision to put in the quiet bits, the dynamics, the album is full of ideas for a Rock album by a band that might have easily been a New Wave band if they’d been born a little later as is evident on Zambia, the opening track on Side 2. It’s a band you never hear about, never see their albums, isn’t on Spotify, well their hit is and some other bits but not the albums I have.

Mr Big were missed, despite the hit, they were missed and Dicken should really have been a big rock star. Of course he nearly was, or he was for 5 minutes when they had their big hit Romeo that reached No. 4 in the UK charts in 1977. It was co-written with Edward Carter who was also credited on the second album as lead singer, so not sure what was going on there except listening to the song I realized that they are both singing it. The US album Photographic Smile released in 1976 was a compilation of the two UK albums. The back cover of the album is quite disturbing, but I’ll let you find out why.

Unfortunately it all happened for Mr Big in 1977 as New Wave and Punk were taking hold and although they managed this one hit, they were fighting a losing battle. The self-titled album that the single came from was out of step with the times (rather like The Doctors Of Madness), if you didn’t fit in it didn’t really matter how good you were. The other problem is that this album, post Glam, isn’t as good as the first one, it tries and almost succeeds with Vampire and Can We Live/Angel Of My Life but it’s inconsistent, when it’s good it’s great. I bet the lads in Queen loved them.

They made this elusive third album, Seppuku (1978), that I’ve never seen and then broke up. I’d like to find that album because they made it with Ian Hunter! But they regrouped and Dicken and bassist Pete Crowther reappeared in 1980 as Broken Home with Pete Barnacle on drums and Rory Willson (double L!) on guitar and guess what, it’s great. It sounds great, good songs, Dicken’s unmistakable voice has something Sting-like about it, but only in as much as it’s clear, pure and high. It’s produced by Mutt Lange and if you don’t know who he is, this from Wikipedia:

He has produced albums for, or otherwise worked with, artists such as AC/DC, Def Leppard, The Boomtown Rats, Foreigner, Michael Bolton, The Cars, Bryan Adams, Huey Lewis and the News, Billy Ocean, Celine Dion, Britney Spears, The Corrs, Maroon 5, Lady Gaga, Nickelback, and Muse. He also wrote and produced songs with his then-wife, Canadian singer Shania Twain. Her 1997 album Come On Over, which he produced, is the best-selling country music album, the best-selling studio album by a female act, the best-selling album of the 1990s, and the 9th best-selling album in the United States.

Broken Home (Dicken and Crowther) made one more album in 1981 with Greg Walsh (brother of Peter Walsh who produced Heyday). Destroyed by the sounds of the day, that is, a horrible drum machine that may have worked for Heaven 17, but this attempt at musical modernisation at the hands of the fickle zeitgeist was suicidal…and that was that. It’s a damn shame because Dicken had it. In the nineties Mr Big reformed, Dicken without Crowther but with Carter, and released an album, Rainbow Bridge, in 1996. Like REM didn’t know Steve Hillage, Fairport Convention’s Peel sessions didn’t know my ex band and Pink Floyd didn’t know Medicine Head, although the story goes that Floyd changed the name of their album to Eclipse but when they realised that Medicine Head’s album had slid into obscurity they resurrected the title. It also seems like Dicken didn’t know Jimi Hendrix?