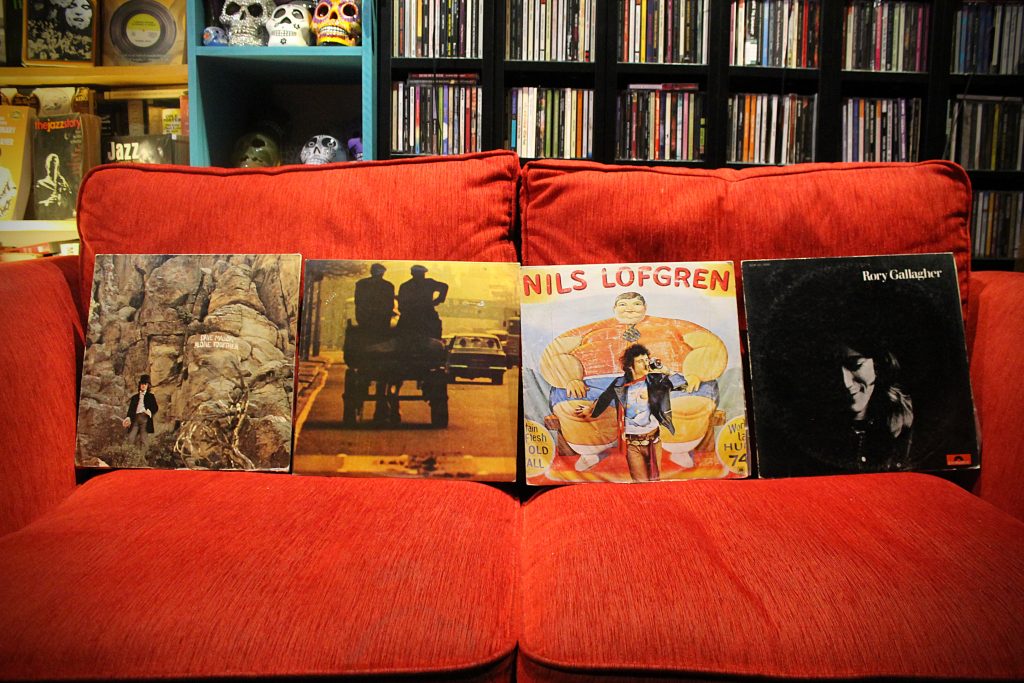 Music today has some bearing on the Amoeba Hollywood closure as the first album I played was Dave Mason’s first solo album after leaving Traffic, Alone Together (1970). I noticed when I was looking at some different copies of the album on different labels, that one of the copies had an Amoeba $1.00 sticker. I’ve bought a lot of records from Amoeba over the years and the dollar bins often had some unfashionable gems and this was one of them. I imagine that an album like this would be more expensive these days as vinyl has become more popular, but when I bought this the bins were full of great albums for little money. The album was also released on marble vinyl which is quite unusual for 1970. It’s a warm breezy record with some nice guitar work and at this point Dave Mason was lauded for writing Feelin’ Alright recorded by Traffic in 1968 and a hit for Joe Cocker in 1969. He also wrote the Psychedelic classic Hole In My Shoe, parodied by Neil from The Young Ones, remember? I hadn’t realized that I liked this album as much as I do, every day in the In Deep Music Archive is a lovely surprise. Another surprise tonight is that coincidentally all four albums are debut solo albums by musicians who were previously in bands.

Picking albums today was based on a feeling for a certain something that I don’t hear a lot in newer records. What is that? Is it warmth, a feeling, a sincerity or maybe just a longing for an era where there seemed to be an underground of music lovers who weren’t hip, they were just music lovers. So with that in mind I picked Ronnie Lane’s debut solo album Anymore For Anymore from 1974. There’s some lovely songs on this mostly forgotten record including an absolute classic in The Poacher as the last track on Side 1. We played it live at one of our shows last time in the US. I sometimes hear a similarity between Ronnie and George Harrison’s voice. Sadly Ronnie died at the age of 51 (he’d suffered from Multiple Sclerosis for years). You can hear some of his greatest work as a member of the Small Faces and the Faces.

Nils Lofgren is another one of those well-known artists that nobody knows. You might recognize him from playing guitar with the E Street Band, but before that he was in a great band called Grin and then in 1975 he released his debut solo album. He’s a pretty great guitar player and singer and has a three-piece band on this album that features Wornell Jones on bass and Aynsley Dunbar on drums. Lofgren also played with Neil Young and Crazy Horse. He appears on After The Goldrush and also on Tonight’s The Night. I highly recommend listening to the Grin records, too, which I will probably pull out to play at some point in the future.

Last album of the night is Rory Gallagher’s debut and this particular copy I bought in Japan when I was there with Anekdoten. It’s not hard to dig Rory’s thing, his vibe, his guitar playing. I saw him live twice in the seventies, once at Reading Festival and once at Liverpool Stadium. When I was pulling out my copy tonight I noticed there was something extra in the sleeve that I hadn’t noticed before. When I pulled it out it was a piece of card from the record label with Rory’s autograph. Yay! If you haven’t discovered Rory yet start here and keep going. Rory Gallagher died in 1995 aged 47 of liver failure.