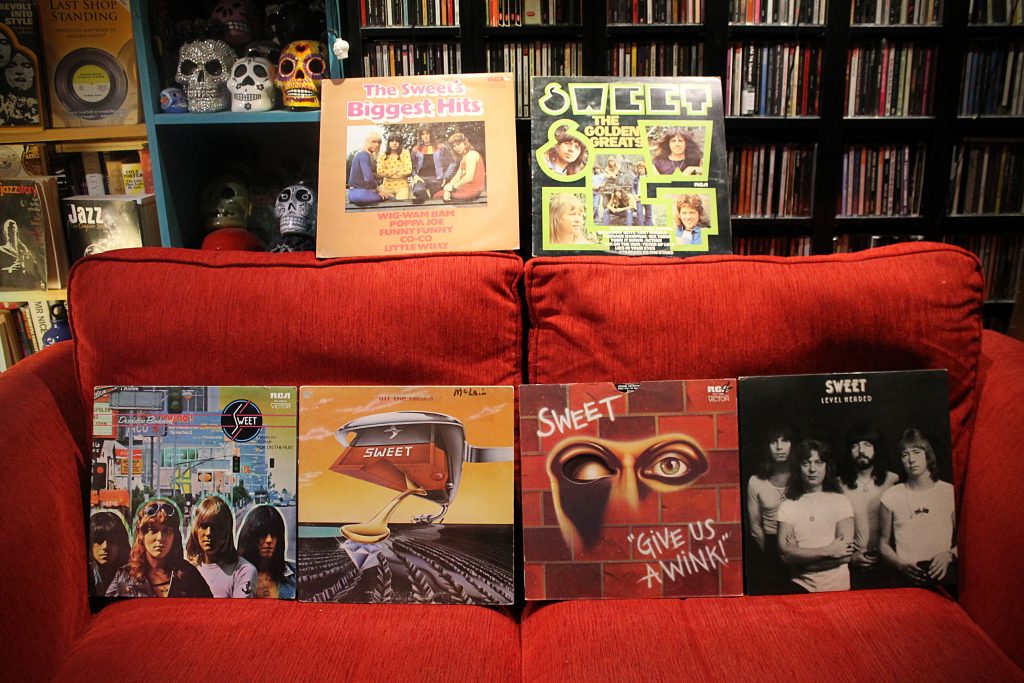 Music today reflects the death of Steve Priest, bass player and sometime singer with Glam Rockers The Sweet, he was 72. The band had thirteen top twenty hits in the seventies and nobody can forget their look and lead singer Brian Connolly’s hair. It was probably that look which had him severely beaten up in the seventies so that he had trouble singing on the Sweet Fanny Adams album (1974) due to injuries to his throat. The violent morons never go away and why do they get so angry when they see pretty men? Tonight’s listening begins when The Sweet are escaping their Teeny songwriters and Pop hit producer Phil Wainman and start working with Mike Chapman instead – just for one album, a step towards producing their own records.

Desolation Boulevard is the first album where they were released from the chains of the Pop hitmakers, Chinn and Chapman, and wrote their own classic Pop hit with Fox On The Run which reached No.2 in the UK charts and No.1 in Germany, a worldwide hit. Chinn and Chapman are still involved in the album, writing The Six Teens and Turn It Down, but this is the album where the band wanted their autonomy and got it. (Although the US album has a different track listing with more Chinn/Chapman songs.) Nobody really seemed to notice what a great band they were singing Bubblegum melodies dressed in their Mum’s reversed blouses and wearing silver trousers, yellow jumpsuits and pink boots. They were in fact talented musicians and in the seventies the singles always had a great Rock track on the B side where they sounded more like Deep Purple or The Who than a Teen sensation. Mick Tucker, who sadly died in 2002 from Leukemia, was a flashy drummer with double bass drum and twirling sticks and even the drum solo on this record is listenable. There’s a cover of My Generation where the band were in fact more at home than what they were known for. A great melodic Rock album for all of you that ever raided your Mum’s wardrobe for the photos but spent a lot of time at home practicing as well.

Give Us A Wink (1976) was their first album with all the songs written exclusively by the band. The record didn’t chart in England but made the Top 10 in Sweden and Germany. It was a departure for the band, some sort of missing link between Queen’s Sheer Heart Attack and Deep Purple’s Machine Head. I imagine that the teen fans were deserting them in droves and fans of heavier music could only see them with their Glam Rock image and catchy hits. Plus the teen fans were getting older and times were changing, Glam didn’t have much life left in it. Doomed to failure marketing-wise but not musically and of course as usual with The Sweet nobody cared about skills, their image wasn’t about that. They had a single, The Action, opening Side 2 that was a Top 20 in the UK and the US and Top 10 in Canada. It’s a really good seventies melodic Rock album.

By 1977’s Off The Record their popularity was seriously waning but you’d never know it by listening to the album. There was always Germany and Sweden and they would ultimately have their popularity last longest in those places, their last two albums not even released in the UK whilst they were still together. Off The Record has great high harmonies like Queen, lots of guitars and catchy songs, but no memorable singles.

Level Headed, the last Sweet album with a hit, was a change of direction abandoning that harder Rock sound. The hit was of course Love Is Like Oxygen, those high harmonies and catchy melodies remain. I always loved this song, there’s just something about the simplicity of the riff that I always found attractive and then there’s the intro riff and if that’s not enough the instrumental middle part that sounds like something from Mike Oldfield’s Tubular Bells. Then there’s the disco outro, bizarre. The song in an edited form reached No.9 in the UK charts, No.10 in Germany and No.8 in the US. On the album you can hear Steve Priest singing lead vocals on California Nights and guitarist Andy Scott singing lead vocals on Dream On and Fountain, that’s three of five songs on Side 1. This was to be lead singer Brian Connolly’s last album. Connolly died in 1997 aged 51 (after a life of chronic alcoholism and heavy smoking) of liver failure, kidney failure and the consequences of multiple heart attacks.

I couldn’t leave the night without listening to some of their super hits, so glad I did, so harmless. Blockbuster, Ballroom Blitz, Teenage Rampage, Wig-Wam Bam, Co-Co, Funny Funny, Little Willy, Poppa Joe, Fox On The Run, The Action, Love Is Like Oxygen. The Sweet have now only one member alive, guitarist Andy Scott who recently made a record with Suzi Quatro and Don Powell from Slade. He has a very silly haircut.