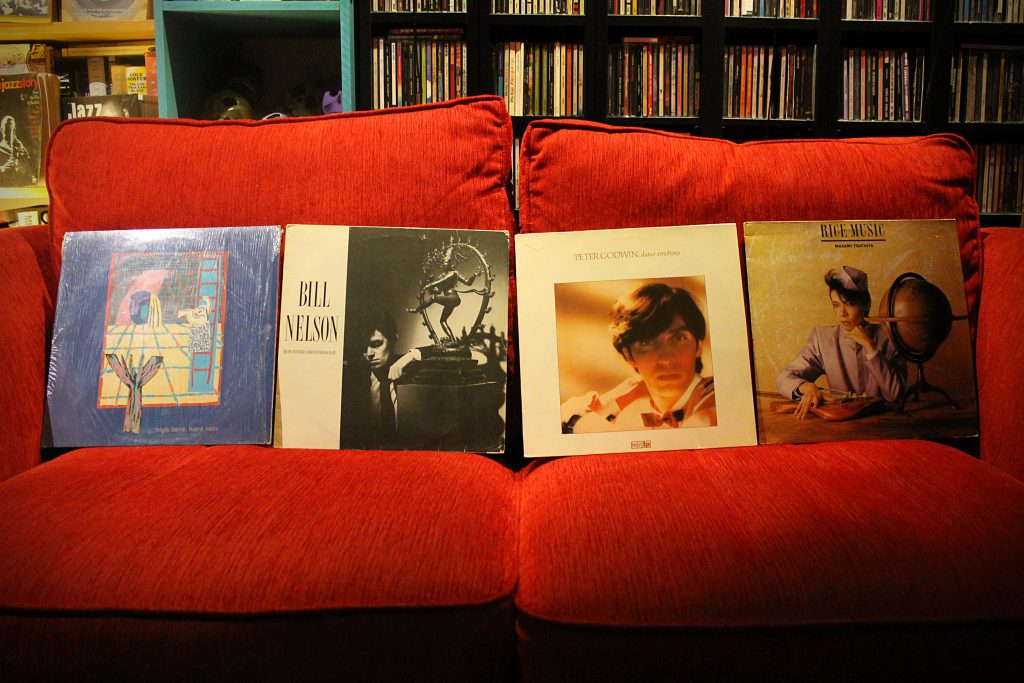 Music today is chosen by Brian Jonestown Massacre guitarist Ricky Maymi. First comes Aztec Camera’s debut album High Land Hard Rain (1983). Whenever anyone sees the year 1983 on a record sleeve it spells danger because at this point technology had blinded musicians and they were doing all kinds of things suggested by the machines rather than their souls. Luckily Roddy Frame, the mainman, was always a good songwriter and that’s what wins here in the battle between the drum sounds and the craft of songwriting. It doesn’t mean that obnoxious sounds don’t exist, it just means you can see through them. He’s pretty jazzy on the guitar, writes good words, but he seems to have gone from being a young man with a big future to making records very sporadically. He’s probably luxuriating in a Scottish glen.

Ricky’s second choice was The Love That Whirls (1982) by Bill Nelson. At this point Nelson had abandoned his role as melodic lead guitarist with fantastic seventies band Be Bop Deluxe and taken to a more experimental direction using those same gadgets that the mainstream were using to spoil mainstream music. He of course made it all arty and interesting as he left guitars completely behind. Us followers remained fans but we did miss his exotic lead solos and his tone. It would be a long time before he picked up an electric guitar again. It was now all drum machines and synthesizers (and his usual colourful lyrics) and I for one kept up with his work all through the eighties, but then it got patchy, not because of lack of interest but because he simply made so many records that it was hard to keep up. Since 1980 he has released more than 130 albums (mostly physical releases) and that’s not including the singles with their extra tracks and the compilations albums. In fact this album came with a free extra album of La Belle Et La Bête (1982), written for a Yorkshire dramatic society’s production of Jean Cocteau’s interpretation of the fairytale. Prolific doesn’t really cover it.

Ricky’s next choice was Peter Godwin’s Dance Emotions, a 6 track EP released in 1982. Godwin was originally a member of Metro, the band he formed with singer-songwriter Duncan Browne with the later addition of Sean Lyons. Standout tracks were America In My Head and Criminal World, the latter recorded by David Bowie on the Let’s Dance album. Godwin’s solo career also gave us some eighties suited up songs, looking very dapper, the most memorable being Images Of Heaven of which an extended dance mix appears on this EP. There’s also an Images Of Heaven EP that’s not dance inspired which I have. Although it seems that this is the route he was taking as he later released the solo album Correspondence with its moderate hit Baby’s In The Mountains in 1982. He then disappeared. There have been sightings, a project called Nuevo in 2010, a co-write with Steve Winwood on the title track of Nine Lives (2008) and a duet with Sasha, Rendezvous (1998, don’t like it), but otherwise he seemed to be missing without explanation, one wonders if he must have found some other inspirational path. The later songs I’ve heard have been under par and out of nowhere there’s a dodgy track called You (2020), that sounds like an old demo. Go figure. But when he’s good he’s great and finding that first Metro album at least is well worth the effort.

Masami Tsuchiya’s Rice Music (1982) sounds very much like the original source of Japan’s (the band) inspiration although Yellow Magic Orchestra is probably more like it. Unsurprisingly it features Mick Karn and Steve Jansen from Japan as well as Percy Jones from Brand X and Bill Nelson. The androgynous Tsuchiya who Japanese music followers might know from the band Ippu-Do, sings, plays guitar, bass (how could you with those two in the room?), synth, drums, koto and yokin, which could be one of many things. The music is a sometimes frantic mixture of the electronic eighties and traditional Japan (the country). A light-hearted note from Wikipedia (they say it’s all true):

“In April 2017, Tsuchiya married his cat ‘Holmes’ in a small ceremony at Fujikyu Highlands resort.”