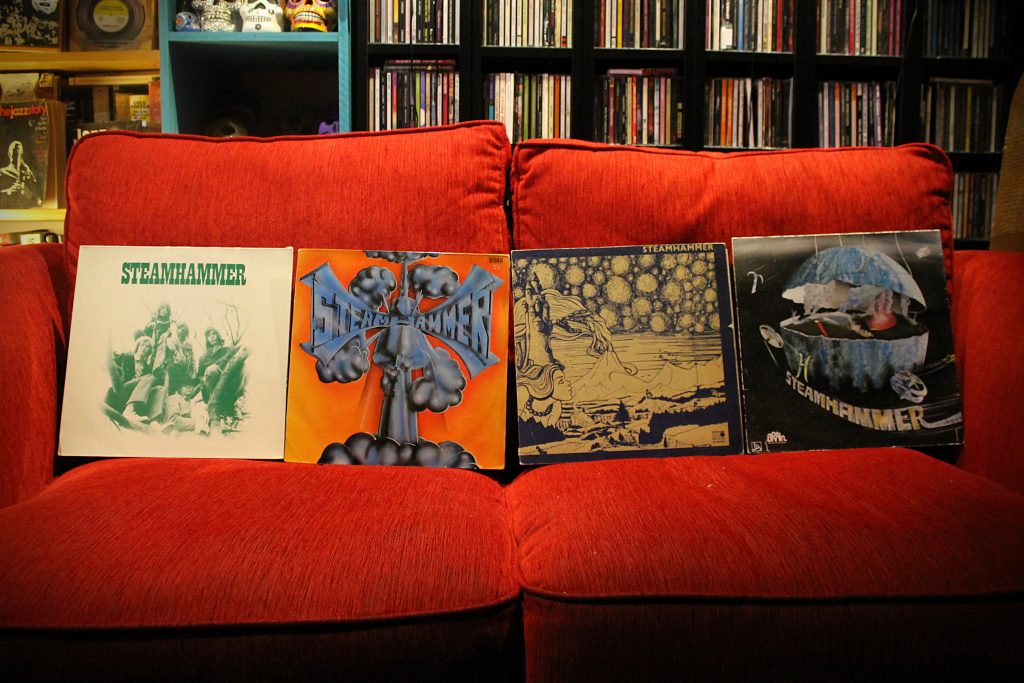 So, music today started with one of my favourite bands that hardly anybody likes, mentions, rates, listens to or even remembers. I always know that a band is good when AllMusic gives it two stars. Steamhammer formed in England in 1968 as part of the Blues scene with Kieran White on lead vocals, guitar and harmonica and Martin Quittenton on guitar. Martin Pugh joined on guitar with Steve Davy on bass and Michael Rushton on drums. Mountains (1970), the first album I played tonight, was their third album and featured some moody Blues (not the band), warm sounds and lots of feel. You can hear the love for their work in the record, or at least you can hear that they understand what they’re doing. If you can’t hear that you shouldn’t be reviewing it. It would be like reviewing Bob Dylan and complaining that it’s too wordy. But all these bands from this era, like Fleetwood Mac, Groundhogs and Free, have this character and I love it. But despite the existence of Ten Years After and Savoy Brown in the collection, it doesn’t stop me liking Echo And The Bunnymen or Cocteau Twins, neither does it stop me liking Billie Eilish or Bob Marley. It’s like God, you don’t have to commit, not everyone can be right about the creation of the universe, especially if there’s so many different gods, so if you don’t get it, follow your own god or all the gods (or non-gods) and leave the others alone. Cream anyone?

Steamhammer released four albums whilst they were together but by the time it came to recording their second album MK ll (1969) Quittenton had gone. He found himself co-writing two of Rod Stewart’s most memorable singles, Maggie May and You Wear It Well. Drummer Rushton had also gone, replaced by Mick Bradley and flautist and saxophonist Steve Jolliffe joined. This album was graced with more AllMusic stars this time (as the others are too) and is their typical brand of inventive Blues with simple Progressive leanings. They’d abandoned the idea of flute and sax on Mountains but on this album Steve Jolliffe is definitely there, in their minds making up for the missing Martin Quittenton.

At this point I went to their last album, Speech (1972), leaving the first to last. Speech was only released in Germany, Kieran White had decided to leave as had bassist Steve Davy. The album was left to Martin Pugh on guitar and Mick Bradley on drums. They had added Louis Cennamo on bass and had guest lead vocalist Garth Watt-Roy (yes, Norman from Ian Dury’s band, Garth was his elder brother). It’s a more experimental jazzy affair which is what is good about it. The first side is some kind of suite and Side 2 is mainly one long track, depending on which version of the album you look at.

So back to the very first album released in 1969. Only Martin Pugh had survived all four incarnations. This was cutting edge when it came out, the British Blues boom was in full swing and this is a fine reminder of the time. You can hear the sixties in it, it’s a bit like John Mayall in the vocal department with that nasal tone and it also has that Ian Anderson vocal sound when Jethro Tull were on the Blues train. But the band is just somewhere else, much wilder and the lack of traditional constraint mixed with the oncoming seventies influence makes it interesting in the same way as Cream were mixing Blues with Psychedelia two years earlier. At this point Led Zep were a contemporary. This album also features the track Junior’s Wailing, recorded later by Status Quo on Ma Kelly’s Greasy Spoon (1970). After listening to Ricky’s eighties picks yesterday and although that’s when I started to make records, my heart loves these warm sounds, having said that the ex band was always fighting against the eighties and the seventies.

Keiran White sang some with Nucleus but moved to Oregon where he became a truck driver. He died of cancer in 1995. Martin Quittenton almost formed a band with Manfred Mann but ultimately left the music biz with some mental health problems. He died in 2015. Steve Jolliffe ended up joining two different incarnations of Tangerine Dream. Mick Bradley died of leukemia before the release of Speech and the record is dedicated to him and contains a lengthy drum solo on Side 2. Louis Cennamo played with Colosseum and formed Armageddon with Martin Pugh and Keith Relf from The Yardbirds who’d helped produce the final Steamhammer album. He was also in the early version of Renaissance which turned into Illusion. If you want to get your head around the birth of Renaissance and their development, well that is another interesting story – if you like this kind of thing.