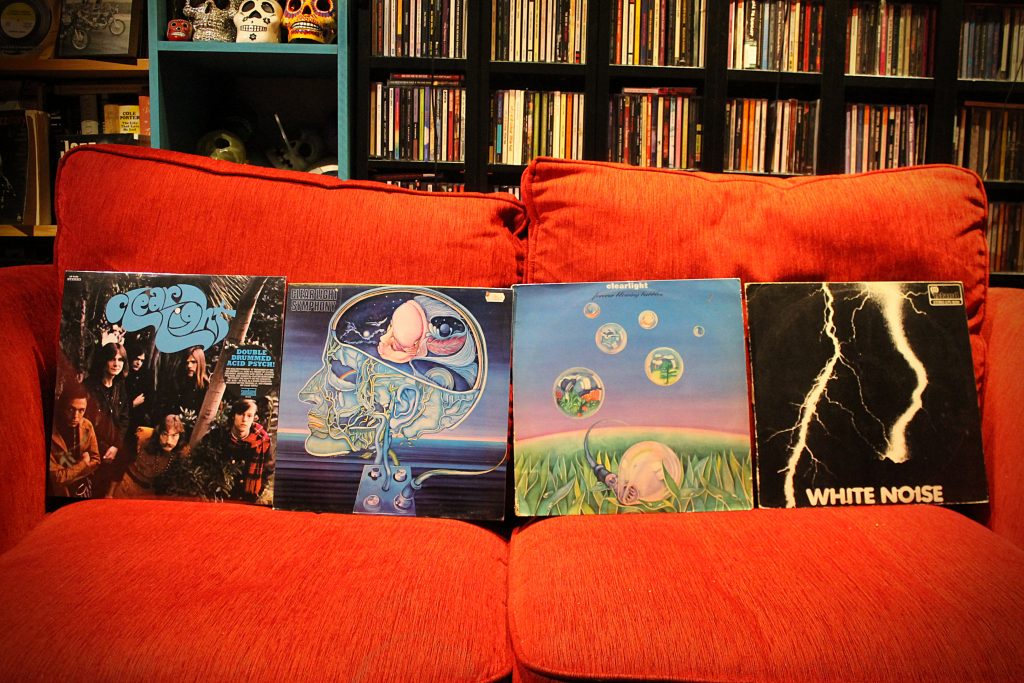 Music today began with a record that arrived in the post. Clear Light were an Elektra Records Pop Psyche band that made one album in 1967. I mentioned them before as the bass player Doug Lubhan played on several Doors albums. This self-titled debut was produced by Doors producer Paul A. Rothchild and has lots of fuzzy guitar solos and sixties organ sounds. If you like Love you’ll love A Child’s Smile. The band also featured Dallas Taylor on drums who went on to play with Crosby, Stills, Nash and Young, you can see his picture on the cover of Déja Vu. The other interesting thing about this band was that they had two drummers (the other was Michael Ney), unusual for the time, or any time.

Side 2 opens with a creepy Psychedelic Tom Paxton song, Mr Blue, for a creepy 6 minutes. Sometimes you have to search through records like this for the gems and if you ever liked The Byrds you need to hear They Who Have Nothing, written by lead guitar player and occasional singer Bob Seal. He didn’t sing this one, that was left to Cliff De Young, who later became an actor (he was in The Hunger that starred Bowie, Susan Sarandon and Catherine Deneuve). Organist Ralph Schuckett played with Todd’s Utopia. Schuckett and Ney played on The Monkees classic The Porpoise Song, covered by the ex-band on A Box Of Birds (1999). Clear Light’s only album, it reached No. 126 on the Billboard chart and is a true document of the times.

I followed this by listening to the other Clearlight, who are French and feature keyboardist leader Cyrille Verdeaux. Clearlight Symphony (1975) is their first album. It also features three members of Gong, Didier Malherbe on sax, Tim Blake on synths and percussion and noises and Steve Hillage on guitar. It was the time of Tubular Bells and records like this were probably going to sell especially if they were on Virgin Records who understood. Side 2 was recorded at the same studio as Mike Oldfield’s masterpiece (The Manor in Oxfordshire) and there were high hopes for its success although I don’t see a chart position anywhere. It’s some kind of epic, symphonic, jazzy, new age, classical, instrumental Rock album – what could go wrong?

The label decided that Side 1 should be Side 2 and reversed Verdeaux’s original concept (that he addressed later for the CD re-release). Side 2 had different musicians Christian Boule on guitar, Martin Isaacs on Bass and Gilbert Artman from Lard Free on drums, vibraphone and percussion. It was recorded at David Vorhaus’ Kaleidophon studio. If you are not aware of his White Noise project that included BBC radiophonic workshop innovator Delia Derbyshire, read on. Clearlight Symphony is a must for fans of Gong (especially Pierre Moerlin’s Gong), Mike Oldfield and epic seventies instrumental albums.

Clearlight followed this symphonic first album with Forever Blowing Bubbles, also released in 1975. It was also recorded at The Manor but this time with a mainly French band with Joel Dugrenot on bass and lead vocals, (sporadic) Brigitte Roy sings Narcisse et Goldmund (the title from the Hermann Hesse novel of 1930) – only Artman survived from the first album. There was one Englishman on there, King Crimson’s David Cross played the violin. The album continues in the multi-mood genre, highly enjoyable, but you have to want to like it.

Last album tonight is the experimental An Electric Storm by White Noise (1969). It’s the album mentioned earlier, the brainchild of David Vorhaus. It came about when Vorhaus attended a lecture with Delia Derbyshire (Dr Who theme anybody?) and managed to enlist her and fellow BBC sound scientist Brian Hodgson into the project. It’s an incredible record because it’s both absolutely experimental and wonderfully melodic. There are also lots of vocals from John Whitman, Annie Bird and Val Shaw, percussion is by Paul Lytton. It’s not an easy record to explain, you might be best going to Wikipedia, read about it and then dive straight in at the deep end.

Song Of The Day is the mostly forgotten Esther Phillips version of The Beatles’ And I Love Her (And I Love Him) mentioned by Paul in the interview and introduced here by John: