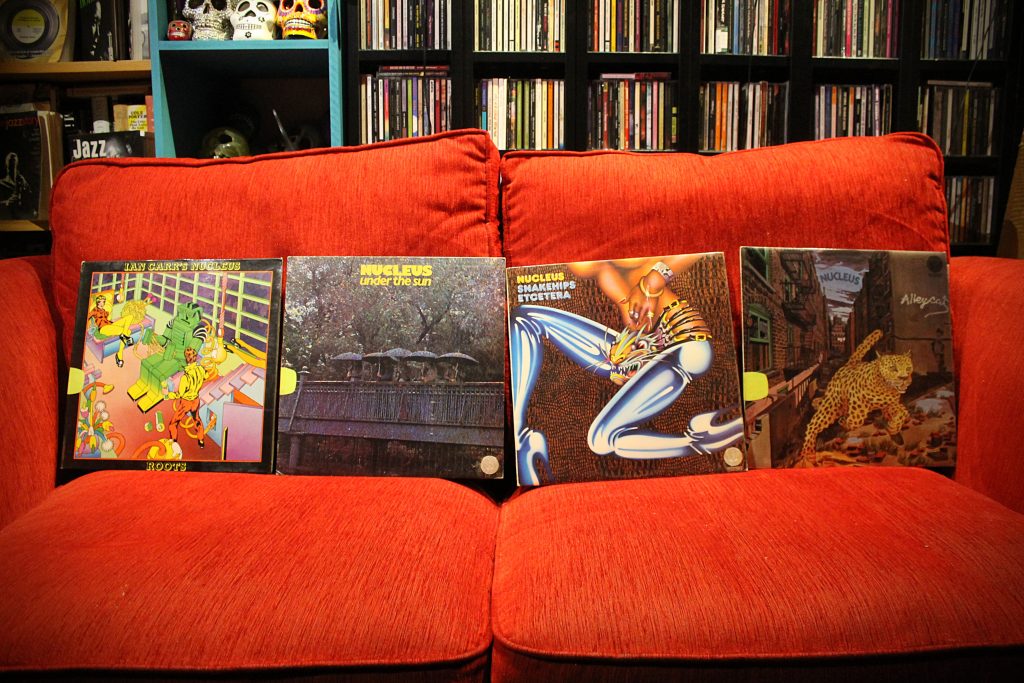 Music today has taken me down that dangerous road where few follow, Jazz Rock Fusion. I felt like some Ian Carr’s Nucleus. He was a trumpet player but playing in a modern environment. He was the bandleader for over 20 albums but there were also some famous names that filed through the ranks. Early on it was Chris Spedding, but also Allan Holdsworth and Soft Machine members Karl Jenkins and Roy Babbington. The list is very long and I won’t attempt to share it here. There’s surprisingly little about them on Wikipedia, as suspected, there’s only a very limited interest but those who are interested are very interested. It’s like trying to find people who collect stamps. Have I ever told you about my stamp collection? One day.

I don’t have the first three Nucleus albums (or the fifth) or the later ones but I have four seventies albums, Roots (1973), Under The Sun (1974), Snakehips Etcetera (1975) and Alleycat (1975), plus a collection. I’m not going to break them down, I put these albums on one after another as if it’s one long jazzy event. Amazing musicians, warm sounds, seventies productions, experimenting, different instruments taking the lead, complexity, musicians playing off each other’s skills, but to me, like Jazz in general, it never sounds self-indulgent. It’s a vibe that you tune into like the classic Jazz of Miles Davis or John Coltrane. I was looking at the prices of those first three albums, Elastic Rock (1970), We’ll Talk About It Later (1970), and Solar Plexus (1971), plus the fourth, Labyrinth (1973), and came to the conclusion that I should buy CDs. There’s some ‘two for one’ albums on eBay at the moment that would cost £20 for four albums instead of £500 for the original vinyl albums on Vertigo.

It is tempting to listen to those first albums on Spotify after tonight’s experience and the word is that the first three are the best – as I’m digging these middle albums it can only get better. I’ve also never heard the dozen albums made beyond 1975. I hope you can find the courage to investigate this kind of music, I’m a fan and it’s not necessarily the skills, it’s the mood, the skills are the icing on the cake. Carr was also a professor of music and wrote biographies about Keith Jarrett and Miles Davis. He died of Alzheimer’s Disease in 2009 at the age of 75 but left behind a wonderful musical legacy that is alive and kicking in the In Deep Music Archive.

Song Of The Day is Concert Of The Day and it’s Ian Carr’s Nucleus from NRK TV Molde Jazz ’74 Rådhuset, Molde, Norway…if you dare, if you daren’t go to 27.35 – 35.10 and listen to the interview, he may be able to explain to you what’s going on, intellectually. I’d just like to add that this live concert is completely out there in comparison to the albums that I have. So you might want to investigate the albums first.