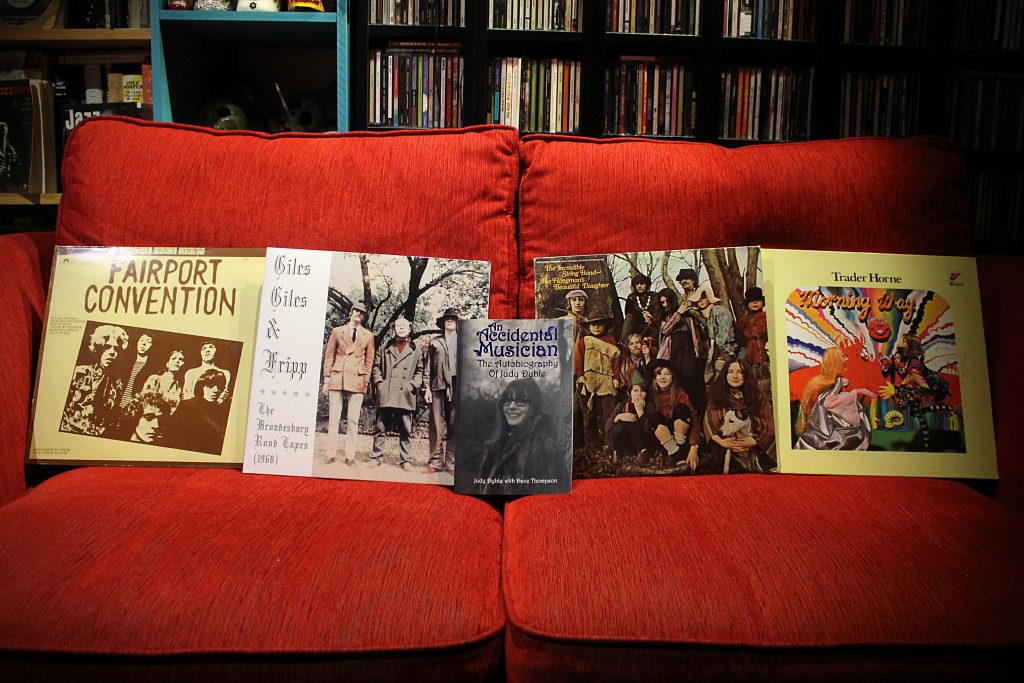 Music today brought the sad news of the death of Judy Dyble, the original singer of Fairport Convention, Trader Horne and solo artist. Although I never met Judy we were in touch via the net and I have an autographed copy signed to me of her autobiography An Accidental Musician. At one point she sent me songs she was working on with Tim Bowness and asked my opinion and now and then she commented on my posts. Really sad to hear she has died (she was 71). I’ll be playing records tonight associated with her. So sad – Judy, I know you were much loved by everyone that knew you.

I don’t have an original copy of the first Fairport Convention album or even a copy with the original cover (1968), but I do have a Polydor reissue that was part of a series released with dodgy artwork. It’s incredible how a record company would take the original idea and make it less visually appealing than the original and think that this would be the best way to attract sales – well, it was the eighties. I suppose that we should be glad that they thought of releasing it at all.

It’s a lovely album with Dyble and Ian McDonald singing. It’s more influenced by American music and Psychedelia than traditional English Folk. It’s a bit The Byrds, a bit Bob Dylan, a bit The Band. There’s a lovely version of Joni Mitchell’s I Don’t Know Where I Stand sung by Dyble and at this point, nobody in England knew who Joni Mitchell was. Not wanting to lose the opportunity of the discovery, Side 2 opens with another Mitchell classic sung by Dyble, Chelsea Morning, which Mitchell didn’t release till 1969 on her second album Clouds. This is a wonderful album that includes Richard Thompson and Simon Nicol on guitar, Ashley Hutchings on bass and Martin Lamble on drums. Highly recommended. One lovely anecdote about Judy is that when she wasn’t actually singing on stage, she would sit and knit.

When Judy left Fairport she briefly joined up with pre-King Crimson Robert Fripp with Michael and Peter Giles on drums and bass. She didn’t make it to any official releases back in the day, but later the home demos were released on The Brondesbury Tapes album (2001) where she can be heard singing on 5 tracks. Anecdotes R Uz today – The Giles Brothers had advertised for a singing keyboard player and of course Fripp does neither, I guess they picked him to join their band on audacity. Although The Brondesbury Tapes is essentially home demos, you’d never know. It’s properly recorded and sounds like an album would from 1968. It’s catchy, folky, melodic and is another essential if not hard to find release for Fripp completists.

A lot seemed to happen to Judy in that year. She guested on The Incredible String Band’s album The Hangman’s Beautiful Daughter (1968). At this point they were a very hip band, Bob Dylan even name-checked them. Judy is only on one track, she sings on The Minotaur’s Song although I can’t see a credit on my US copy. There’s a lot of Incredible String Band albums that you need to own, start here for the Psych Folk weirdness, the words, the arrangement, the odd instrumentation and then follow with The 5000 Spirits Or The Layers Of The Onion (1967).

In 1971 Judy formed Trader Horne with ex Them keyboardist Jackie McAuley. He also played guitar and they both sang. They released Morning Way in 1970. I have a re-released copy of it on the thickest cardboard ever made for a record sleeve. I remember when I bought it I was thinking how heavy it was and wondering about getting it back to England from America without having a weight problem. Inside the music is lovely melodic pastoral songs with occasional strings. Some tracks are acoustic with piano and guitar, others have drums. Judy plays autoharp and piano. McAuley wrote most of the songs and plays all kinds of instruments. Judy wrote the title track and co-wrote Velvet To Atone with Martin Quittenton whose name has shown up here before as ex Steamhammer man and the co-writer of Maggie May and You Wear It Well for Rod whassiname.

In recent years Judy has been prolific in her projects whilst suffering an ongoing illness. RIP Judy, you are missed. Condolences to family and friends.

Song Of The Day is Time Will Show The Wiser by Fairport Convention, written by Emitt Rhodes for his band The Merry-Go-Round in 1967: