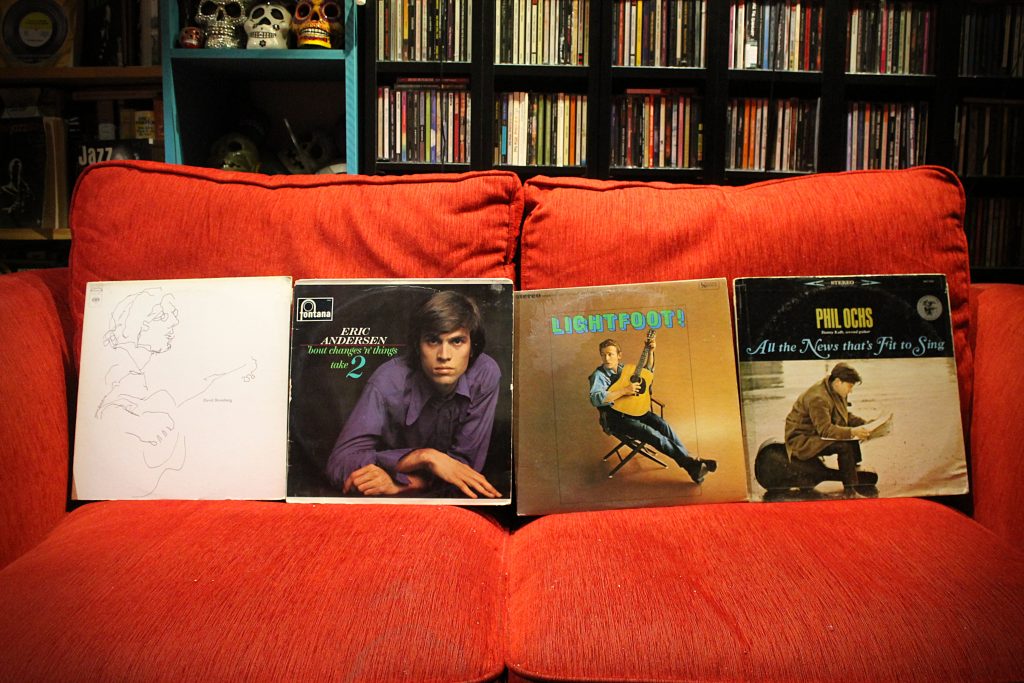 Music today continues in the vein of artists that time forgot. Today it’s David Bromberg and his storytelling self-titled debut album from 1972. He’s kinda folky, kinda jazzy, kinda bluesy and countryish and seems to have no place in anyone’s head. There are some mellow live and studio tracks on the record. He’s more famous for playing with people who are more famous than him (Ringo, Tom Paxton, Jerry Jeff Walker, Willie Nelson, Eric Andersen, Al Kooper, Carly Simon, Jorma Kaukonen, Jerry Garcia, Bob Dylan…you get the picture). So perhaps he’s seen more as a sideman but he’s made a lot of records. He has a clever fingerpicking style that he doesn’t overuse and that’s because of the eclecticism of his songs. He’s one of those artists that I always used to see in the cheap bin and one day I decided to buy him without having heard him. It’s surprising what you can find down there on the floor. This album has Bob Dylan playing harmonica on Sammy’s Tune and George Harrison playing and co-writing the song The Hold Up.

You might also be interested to know that Bromberg played bass and rhythm guitar with Rusty Evans in The Deep (no, not In Deep). This album, Psychedelic Moods (1966), is allegedly the first album to use ‘Psychedelic’ in its title. The Blues Magoos and The 13th Floor Elevators coming later. It’s on Spotify if you’re too scared to buy it without hearing it.

In 1967 Eric Andersen released ‘bout Changes ‘n’ Things Take 2. The album contained Thirsty Boots that Dylan recorded for Self Portrait but it didn’t make the cut but it did eventually see the light of day on The Bootleg Series Vol 10, Another Self Portrait. Can you imagine Dylan records your song and then it doesn’t make it to the album (tragic)? Gordon Lightfoot and Paul Simon had better luck. Other unfortunate events included Brian Epstein was about to become his manager when he died. In 1972 he released his most commercially successful album, Blue River, the follow-up, Stages, was finished and ready to go but Columbia lost the tapes, the setback took its toll. Sixteen years later they found the tapes. Andersen had been part of the Greenwich Village scene in the sixties and by 1969 had made six albums including three in that year. He has an appealing voice, storyteller and protest lyrics, songs of love, hope and despair. In 1988 he released the critically acclaimed Ghosts Upon The Road. There’s a lot to investigate with Eric Andersen, good luck. A documentary film, The Song Poet, is in production.

Phil Ochs was one of the great protest singers and you hear very little of him anymore. His first album All The News That’s Fit To Sing (1964) has as many scathing attacks on the hypocrisy of democracy as on any dictator or attack on freedom itself. The title comes from the New York Times motto “All The News That’s Fit To Print”. The founder of the New York Times Adolph Ochs was no relation. Thoughtful records of conscience that seem out of date and forgotten as they reflect the times in which they were written. But really, the message never goes out of date and neither does the struggle. One could write all night about Phil Ochs, his life, his songs, his friendship with Victor Jara, his decline, and finally his suicide, but as this is simply a daily blog, someone has already done that for us in more detail here.

Gordon Lightfoot released his first album Lightfoot in 1966. Famous for his rich voice, his 12 string guitar and his prolific songwriting, he was a major contributor to the rise of the singer-songwriter as a genre. The album boasts Early Mornin’ Rain, one of the songs that did get recorded and released by Dylan on Self Portrait. Another classic, The Way I Feel. Where do you start with a man that has been releasing albums for over 50 years, I suppose at the beginning. It’s not that Gordon Lightfoot is forgotten, one just wonders if he is ever discovered.

Song Of The Day is Rain by The Beatles from Revolver (1966):