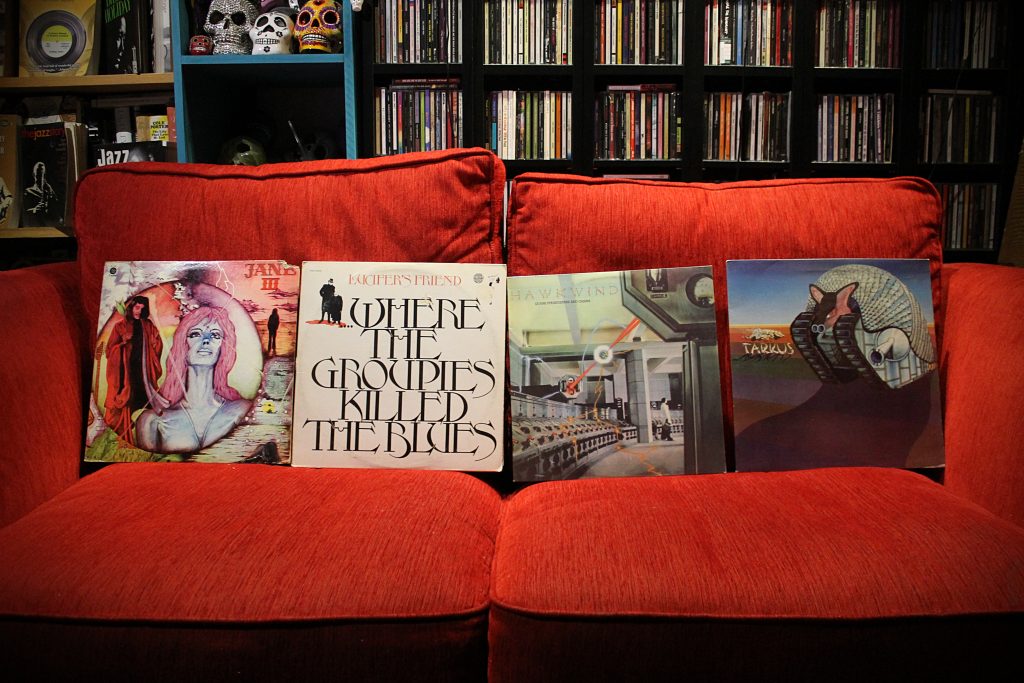 Music today has been by the bands that played the Night Of The Prog the weekend that Olivia and I met. Of course, these bands were at their best many years ago and most of them are left with few members and their heydays are over. Take Jane, as I remember they were billed as Peter Panka’s Jane. He was the original drummer and singer but he died in 2011. I think they called it this because there are a couple of other versions of the band. The album I’m listening to tonight is the earliest I have on vinyl, Jane III. It’s an odd record of jamming and shouting and has a mixture of great moments and not so great moments. I need to get the first two albums to investigate them more thoroughly because I have records beyond this one but not before.

A version of Lucifer’s Friend was also on the festival that night. They have different styles on different records. Sometimes Rock, sometimes Progressive, sometimes catchy tunes. I was trying to find the one I like the most out of the 4 albums I have and decided it was their second album with the silly title Where The Groupies Killed The Blues. They were a German band with an English singer, John Lawton, who was once in a band from the northeast of England (Stonewall) that included Paul Thompson (Roxy Music), Viv Malcolm (Geordie, Brian Johnson’s band before joining AC/DC), and John Miles, yes that John Miles – “Music was my first love and it will be my last”. John Lawton was also the singer in Uriah Heep for three albums after David Byron. I like this silly album, it reminds me of Rainbow meets Uriah Heep at a Blue Oyster Cult concert. The more I hear it, the further along, the better it gets, try it.

One of the strangest sites at Night Of The Prog was seeing Carl Palmer on stage setting up his own drum kit. I saw ELP live in the seventies on the Brain Salad Surgery tour at the Liverpool Empire. The Loreley show was odd because he did ELP songs but had the guitarist play the Keith Emerson parts. Original, yes, and how can you duplicate a man that dresses as a medieval huntsman in leather togs and thrusts knives into his Hammond organ, oh yeah his playing was amazing too. I’ve been looking for an excuse to play an ELP album and here it is. I decided on the second album, Tarkus (1971), because I once played it to someone who loved Goth and had never heard of them and she loved it despite their reputation for being worthless with the later style monsters.

Seeing Hawkwind at this festival as a headliner was one of the strangest moments. You got the impression the audience didn’t really like them that much and for many reasons. First of all, they looked rather like a gang from Mad Max and rather than being Progressive they were more Cosmic Punk. Nerd fans like me will remember their punky singles from the seventies, Urban Guerilla (B-side Brainbox Pollution) and Kings Of Speed, so it was no surprise to me to see them in this more aggressive incarnation. It was a long way from the Space Ritual tour that I saw at the Liverpool Stadium, they scared people off in Germany.

So tonight I picked an album that I hadn’t played for a really long time, Quark Strangeness and Charm (1977). It’s odd how this band and these late seventies albums somehow fit in with the Punk scene especially when you consider the band’s roots (but then look at Larry Wallis and Pink Fairies and Lemmy and Motorhead). The album has some great lyrical Robert Calvert madness and although it’s got a bit of a weird mix in the drum department, you get used to it. Put it on your list of Hawkwind albums to investigate after you’ve investigated the others…and yes, I did pre-order their upcoming album.