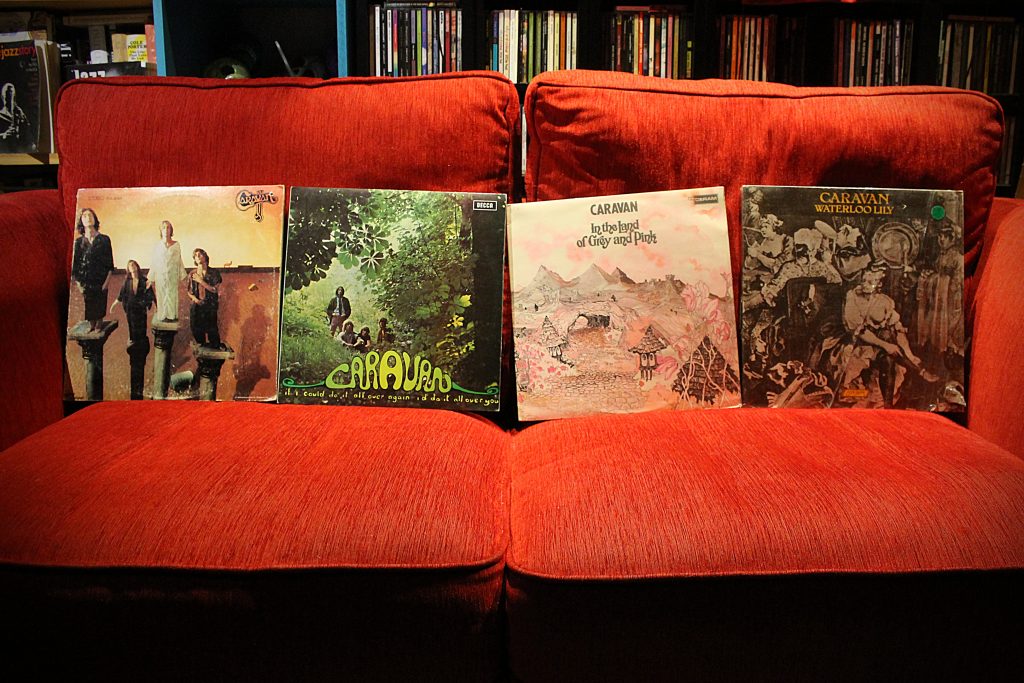 Music today starts with the debut album by Caravan because sessioneer Brian in Florida asked me about them today. I love this album because it lives in that twilight world between the sixties and the seventies, between Psychedelic and Progressive but that was the Canterbury scene that also included Soft Machine. It had that jazzy element that seems to lurk somewhere in the genre as well as that lyrical sense of humour (you can also hear that in Matching Mole). The lineup was Pye Hastings, guitar and vocals, Richard Sinclair, bass and vocals, cousin Dave Sinclair, keyboards, and Richard Coughlan, drums. Hastings, the only original member, remains in the band to this day and is seen as the leader, despite massive contributions by the original members, musically, vocally and in the songwriting department.

The first album was signed to Verve and released in 1968 although nobody seemed to notice. It’s packed full of great songs and sounds, instrumentation and singing. There’s something up with the mix on the third track, Policeman, as if the wrong version made it to the master – the vocals seem to be in the wrong place, not just a taste thing, but incorrect. Still a lovely album, highly recommended.

After the one album on Verve, they signed to Decca and released If I Could Do It All Over Again I’d Do It All Over You (1970). Humour intact and Jimmy Hastings, Pye’s brother, on flute, it’s another great album that again straddled different genres but was so particular that it consolidated what was to become known as the Canterbury scene. The perennial 14-minute For Richard, a stand out. One interesting thing for me about Caravan was that Pye Hastings played an electric 12 string. A Fender solid body that sounds nothing like Roger McGuinn’s Rickenbackers. People have often said to me that I must be influenced by McGuinn but I only really started to notice electric 12 string players after I started to play one regularly. The style or the idea to play it both as a jangle and a fuzzed-up monster came from seeing a band in LA in the early eighties. They were called Community FK and the singer-guitarist, Patrick Mata, played an electric 12 string through a fuzz box (I think it was also a Fender), that left a big impression on me and probably influenced me more than the sixties jangle as a direction. That arpeggio style was natural for me to adopt but jumping on the distortion pedal wasn’t the normal approach for someone that was playing a 12 string.

Next came In The Land Of Grey And Pink released in 1971 with the quintessentially eccentric English opening track, Richard Sinclair’s Golf Girl, that has the immortal line:

Standing on a golf course
Dressed in P.V.C.
I chanced upon a golf girl
Selling cups of tea

I’ll let you research the rest of the lyric should it pique your interest but apparently it was about his girlfriend and future wife. The album had a large musical input from Dave Sinclair, Hastings had dominated the writing on the first two albums and other members had a backlog of material. This led to the Nine Feet Underground suite that fitted perfectly into that strange twilight world in which they lived, Progressive, Pop, what were they? They were the Canterbury scene.

At this point, Dave Sinclair left and joined Matching Mole frustrated with the lack of success. He was replaced by Steve Miller for the next album Waterloo Lily (1972). Miller who is Phil Miller guitarist from Matching Mole’s brother didn’t quite fit into Caravan sonically and consequently only lasted for one album before Dave Sinclair’s return. It was more Wurlitzer than Hammond and the sound was jazzier. Despite this, the album still has that Caravan sound with the two singers but Sinclair’s writing is missing. Like the previous album, they had moved from Decca to Deram the more progressive wing of the label as the Progressive album scene was becoming popular. I was looking on Wikipedia for something about Caravan and came across Pye Hastings’ Wikipedia page, there are three sentences, it says so much by saying so little.

Song Of The Day is Winter Wine from Caravan’s third album In The Land Of Grey And Pink released in 1971. The performance is live from Germany’s Beat Club in the same year.