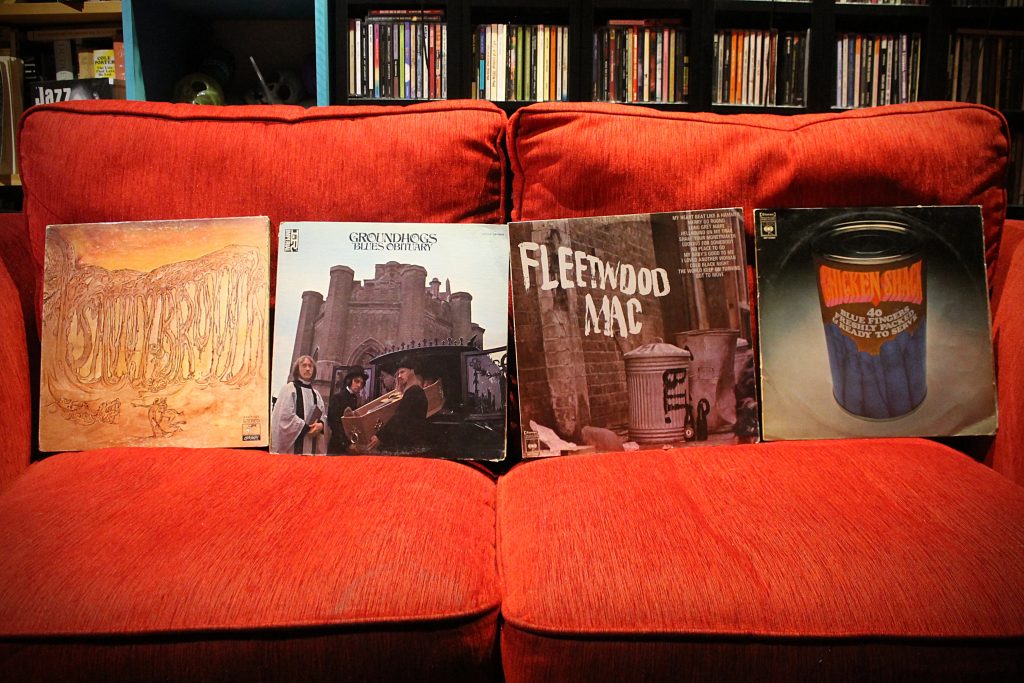 Music today took an English Blues turn. There was something about how we interpreted it over here that gave it a different slant to the Americans. Savoy Brown formed in 1965 and were contemporaries of Peter Green’s Fleetwood Mac and other Blues bands of the era, like Chicken Shack, John Mayall’s Blues Breakers, Groundhogs and all growing out of the late sixties British Blues boom. They weren’t just Blues influenced like say Free, they were more traditional in their songs, lyrics, chord progressions, the sounds of the instruments, the chords they used. Blues Matter (1969) was the band’s third album and is the sound of an era and a style that was riding high in the late sixties. These bands went straight to the source but instead of reinventing everything, it was more of a tribute to their heroes. But of course, these bands were not black dudes from the southern American states, they were white music lovers from Peckham and other London suburbs. Enthusiastic young record buyers who had discovered music from across the pond that was drenched in heart and soul, pain, real feelings and feel in the instruments, peeling the notes off the guitars and grooving on the bass with a drummer that could swing. This was their version and they were purists. They weren’t cashing in, they were just using the tools, learning from the masters and using the template proven to be the best way to express this meaningful music. If you don’t know these bands, Savoy Brown’s Blues Matter is as good a place as any to start with its mix of live and studio tracks. Mainman Kim Simmonds plays those sweet Blues tones and you have to transport yourselves to this world to appreciate them. Of course the Stones, Zeppelin, The Beatles were all influenced by this music too but didn’t stick to the plan in the songwriting department creating new music from their influences but somebody had to stick to the original and cover it with a British angle.

When Groundhogs made Blues Obituary (1969) their second album with a coffin on the cover one imagines they were trying to bury the Blues. Well, they struggled to break through the graveyard sod outside England but were popular here into the seventies and made a slew of exciting albums that broke into the Top 30. Very bluesy but with that English Blues boom take on everything with singer/guitarist Tony McPhee’s brilliant improvisations. With Ken Pustlenik on drums and Pete Cruikshank on bass, you hear a classic sixties Blues power trio, a model followed by Robin Trower, instigated by Jimi Hendrix and mastered by Rory Gallagher.

Fleetwood Mac’s debut (1968) is a groundbreaking Blues spectacular. A reinterpretation of Elmore James, Robert Johnson and Howlin’ Wolf with Peter Green’s magic guitar playing and Jeremy Spencer’s slide and both their songs. Essential. These records are actually too good to describe, you just have to listen to them.

Stan Webb’s Chicken Shack is the first place Christine McVie appeared (or Christine Perfect as she was called then). There’s been a revolving wheel of members and at one stage every one but Webb left Chicken Shack to join Savoy Brown. Their first album 40 Blue Fingers, Freshly Packed And Ready To Serve (1968) made it to No. 12 in the year of release. It’s so interesting listening to these British Blues albums with their different approach to guitar, feel and singing. You can thank the Blue Horizon label’s Mike Vernon, John Mayall and Alexis Corner for nurturing all this British Blues talent that also spawned Eric Clapton, Jeff Beck and Jimmy Page. Have a night with the British Blues.

Song Of The Day is Oh Well by Fleetwood Mac with Peter Green, Danny Kirwan and Jeremy Spencer. Live in 1969 on Monster Mash and introduced by Alan Price and his Geordie accent.