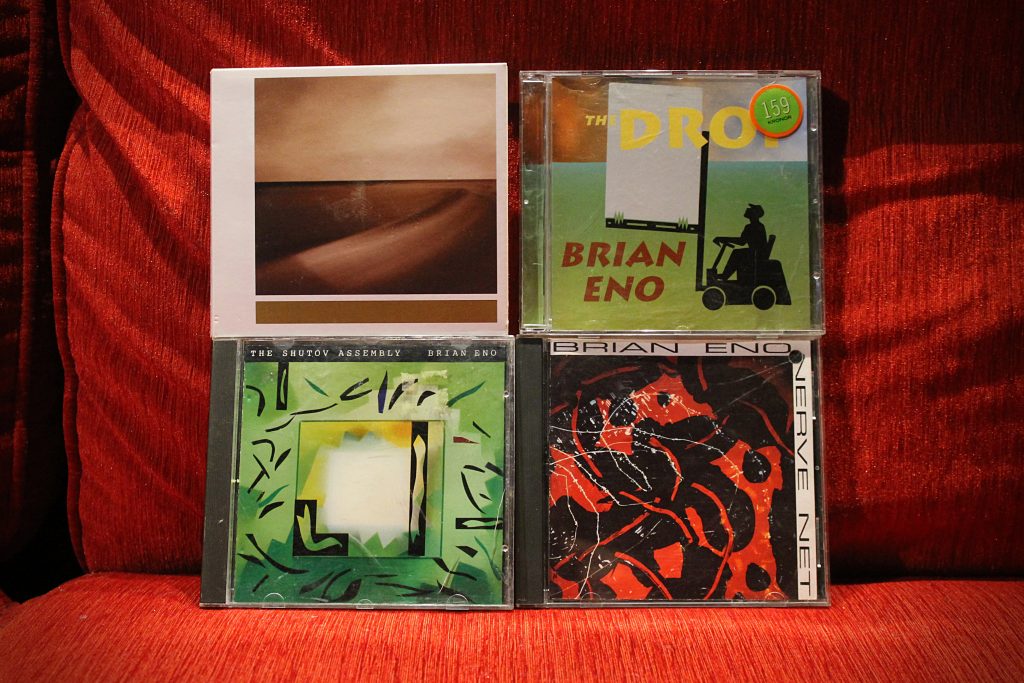 Music today started with Jeff (who brought the Focus album around that I bought on eBay the other day), he dropped by to give me some great books – The Kinks, Squeeze, The Specials’ Horace, Jimi Hendrix, The Beatles and a blue vinyl Sly And The Family Stone single, Stand. These were all gifts for the In Deep Music Archive library and I’m most appreciative of such a gesture. Also today the Be Bop Deluxe Axe Victim box arrived – on a Sunday. It looks beautiful and I know that what’s inside is just that.

Listening wise, looking back at Eno’s records from the nineties begs the question, as Electronic records, do they sound dated because of technology? Well, most everything does sound like its era. Strangely, dated is a negative term and retro a positive one despite them ultimately being the same thing. Nerve Net from 1992 does sound dated and until those sounds become hip again they won’t be seen as retro. That’s the problem with ‘now’, it’s tomorrow’s yesterday.

Robert Fripp appears on four tracks, Robert Quine on one, Jamie West-Oram (The Fixx) on one (and Christine, voice on one, his wife?), John Paul Jones (Led Zep) plays piano on one and Benmont Tench (Tom Petty) key percussion on one. Brother Roger also appears. Then there’s two dozen people I haven’t heard of.

It’s pretty much a journey through processed sounds and samples made into rhythms. It’s the kind of music you’d play when you are shopping for a new robot…in 1992. Only The Roil, The Choke gives a hint of that side of Eno that we miss from the seventies vocal albums. Then there’s Ali Click which reminds me of Numb, the U2 song that The Edge spoke on Zooropa (1993). I guess the idea came from here and that U2 were always listening very closely to what Eno was doing, he co-produced Zooropa with producer/engineer Flood. It’s also redolent of Burnt Friedman and Jaki Liebezeit’s Secret Rhythms series, a collaboration that began 20 years later, so perhaps it’s not dated at all but more a signpost for the future as Eno’s works often are.

The Drop was also released in 1992 but was recorded between 1985 and 1990. It’s more sounds to associate with images than music. I can see the strange beings to which these snippets operate as a soundtrack. How they move, how they slip in between each other, how they stare over the edge of an abyss, how they investigate the paraphernalia of their circumstance. I remember those strange Czech animations from the distant past with the atmosphere of winter forests. This is the electronic version as they leave that winter forest and find themselves under the bright lights of a metropolis, investigating the machines.

The Shutov Assembly was released in 1997 and it’s that high period for the CD. Vinyl was dead and albums like this were made for the format. Uninspired artwork, except for the minimalist principal, it probably looked good in the nineties. Eno was famous for inventing music not to be listened to and these tracks although not exactly ambient fit in to the same category. It’s not that they’re bad it’s just that they’re only mildly interesting and Eno’s name makes the difference. Occasionally a track stands out as moodier than the rest, in this case the 16-minute Ikebukuro. Don’t get me wrong they are like lamps with red bulbs, they’re not doing much till you turn them off and then you miss them.

Small Craft On A Milk Sea was a collaboration with Leo Abrahams and Jon Hopkins. There seems to be some connection between this music and the soundtrack to the Peter Jackson film The Lovely Bones. Wikipedia says: “The trio also entered the studio in April 2010 to record music that was rejected from the film soundtrack to The Lovely Bones and five of those tracks ended up on Small Craft On A Milk Sea.”

How do you record music that’s been rejected when Small Craft On A Milk Sea is more of an improvisation than set pieces? The album begins mellow with Emerald and Lime and I can hear that this might be the music over the credits to a film. It continues with Complex Heaven and the title track but by Flint March it all starts to change to more drum-based and incessant themes, continued on Horse and 2 Forms Of Anger. Bone Jump is a short respite but Dust Shuffle and Paleosonic keep it angry. Slow Ice, Old Moon and Lesser Heaven return to atmosphere. The album ends more in the mood it started with Calcium Needles, Emerald And Stone, Written, Forgotten and Late Anthropocene. It’s an odd album of mood and fire, don’t put it on thinking you might use it to fall asleep to because just as you get comfortable you’ll find yourself banging your head on the top bunk.

Video Of The Day is two examples of the thoughts of Brian Eno. Short and long (long starts at 07:28).