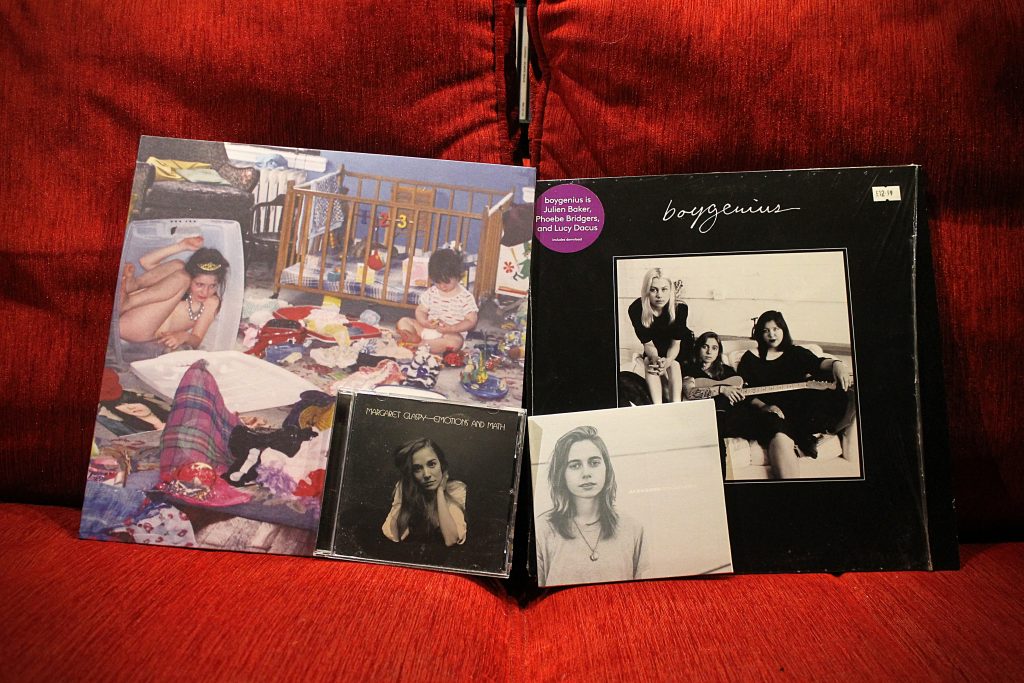 Music today has taken me into the rich world of contemporary female singers. There seem to be so many of them, I touched on this the other day at least with Phoebe Bridgers who is 25 with two albums out, Stranger In The Alps (2017) and Punisher (2020). I’ve also been listening to some of her contemporaries, Lucy Dacus who is also 25 and Julien Baker who is 24. You may be aware that the three of them made a six-track EP together under the name boygenius which is really great. I have Julien Baker’s Sprained Ankle (2015), she released her second album Turn Out The Lights (2017) and I have ordered Lucy Dacus’ second album Historian (2018). Her first is No Burden (2016).

When Joni Mitchell was 25 (she’s 76 now) she had made Ladies Of The Canyon (1968) and a year later Clouds (1969). If you think what happened next with her amazing seventies albums you might wonder what these great American artists may become when they reach their thirties and forties and beyond. If you listen to Lucinda Williams, well, you get the picture. Incredibly Laura Marling is just 30 and she has released seven studio albums and one live album. Tonight’s not the night for her because you’d have to dedicate a lot of time to her work just on the output alone, plus she’s English (I have all of her records).

Another American I like is Margaret Glaspy who is 31, she has a new album, Devotion (2020), and has been releasing EPs since 2012. I have her first CD album Emotions And Math (2016), love it. I have four of the five albums by Sharon Van Etten (39). The newest one, Remind Me Tomorrow, is great. So you have some names, where do you start? Hopefully, you followed up the Phoebe Bridgers post last week as well as Rumer (41) and Lucinda Williams (67) and of course Anohni (48). What happened to Tanita Tikaram (50), who bought her last album Closer To The People (2016)? What about Katie Melua, who is she? In 2006 she was the UK and Europe’s biggest selling female artist…before I’d even heard a note, this year she will release her eighth album. Tasmin Archer (56) completely disappeared after Sleeping Satellite was a No. 1 single.

Why am I putting their ages? Well perhaps if you’d bought Ladies Of The Canyon and followed Joni from the start it would make the journey even better. Who followed Kate Bush (61) from the start when she was 19 and the release of her debut album, The Kick Inside (1978), I did (she’s 62 next week). She recorded The Man With The Child In His Eyes when she was 16, she wrote it when she was 13. My point here is to turn you on to a younger generation of talented (American) singer-songwriters by comparing them to older established singers who were once young unknowns. Bridgers, Dacus and Baker are related in their age and their boygenius collaboration. Glaspy is something else and the bits I’ve heard of her new record sound quite different to the first, slicker, smoother, so I need to listen properly but in the end, what I think doesn’t matter.

But don’t forget that Patti Smith is bigger than ever. Great albums are being made by PJ Harvey (50), Björk (54), Sinead O’Connor (53) and what happened to Siouxsie Sioux (63) and Lene Lovich (71)? Out of these newer artists who will become a commercial success, who will become a legend, who will be forgotten and ultimately who cares as long as you like it? But don’t ignore them because they are young and don’t forget them because they are old, they are all making great records all the time.

Here are some videos of the day, see if you like anything and if you don’t find something you do like by lifting up some stones.