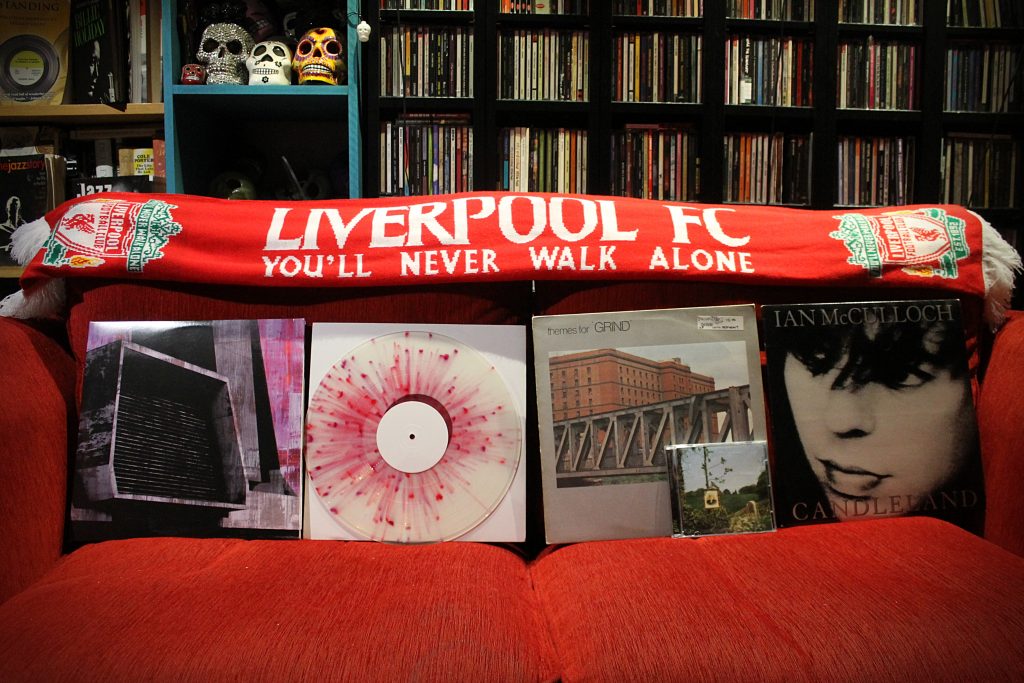 Music today has to come from Liverpool and I thought I’d pick some Echo & The Bunnymen related projects, mostly Will Sergeant. One of my faves comes from Poltergeist, Your Mind Is A Box (Let Us Fill It With Wonder) (2013), an instrumental project from Bunnymen guitarist Will Sergeant and ex Bunnymen bassist Les Pattinson (Nick Kilroe on drums), Will also plays keys. It’s just what you’d expect, great bass lines with inventive guitars. It’s hard to find on vinyl but it is on Spotify so you can hear it. Luckily Les sent me a copy, it’s hard to find now and between £50 and £150 on Discogs and not available anywhere else. Make sure you listen to it, it’s so off the radar and so good. You can buy it here.

In 1982 Will Sergeant made Themes For ‘Grind’ on the label 92 Happy Customers. I’ve had this record for years and it’s been a while since I played it. It has all the sounds of the synths that OMD used back then although there’s much more to it than that. It’s ambient, electronic, early eighties, grey soundscapes that make walking through a Liverpool street past a disused factory in the mist in November a real pleasure. It is still available at a reasonable price. You can buy it here.

Will made Weird As A Fish in 1978 which seems to have been re-released as Weird As Fish/Le Via Luonge (perhaps originally a typo?) in 2003. You can read a review here.

Will Sergeant’s Glide project has been releasing records since 1997 with Space Age Freak Out, Performance in 2004 and Curvature Of The Earth in 2004, that’s the one I have on CD. Assemblage 1 & 2 was released in 2014. Curvature Of The Earth is much closer to Poltergeist than Themes For ‘Grind’ but I have to admit I have only heard the records I have so I’m not sure of the creative arc on Will’s projects. I always like what I hear. It’s also on Spotify.

It’s fascinating when you analyse the solo projects of these Bunnymen members when you consider that the dark soul of The Bunnymen seemingly manifests in the voice, stage presence and demeanour of singer Ian McCulloch. But in fact, all the weirdness comes from Will Sergeant and as a collaborator in Poltergeist Les Pattinson.

McCulloch’s first solo outing was the 12-inch single non-album track and cover of the old standard made famous by Frank Sinatra, September Song (1984), I guess the crooner in him thought it was a good idea, I bought it, I like it. The solo album Candleland came in 1989 after McCulloch had left The Bunnymen. It’s nice, which might be what’s wrong with it. Despite the coup of the title track featuring Cocteau Twins’ Elizabeth Fraser it was tame and was more of a showcase for McCulloch’s crooning. If you like that, then this was good, if you missed the edge then this wasn’t for you. It made it to No. 18 on the UK chart and Faith And Healing was a No. 1 single on the American Modern Rock chart which sounds like Vince Clark at a solo Fergal Sharkey listening party. Listening back to it now and realising it’s 31 years old, it sounds so smooooooooooth and Pop and designed for commercial appreciation. It’s the polar opposite of Sergeant’s more adventurous approach to original music.

Videos & Sounds Of The Day are: