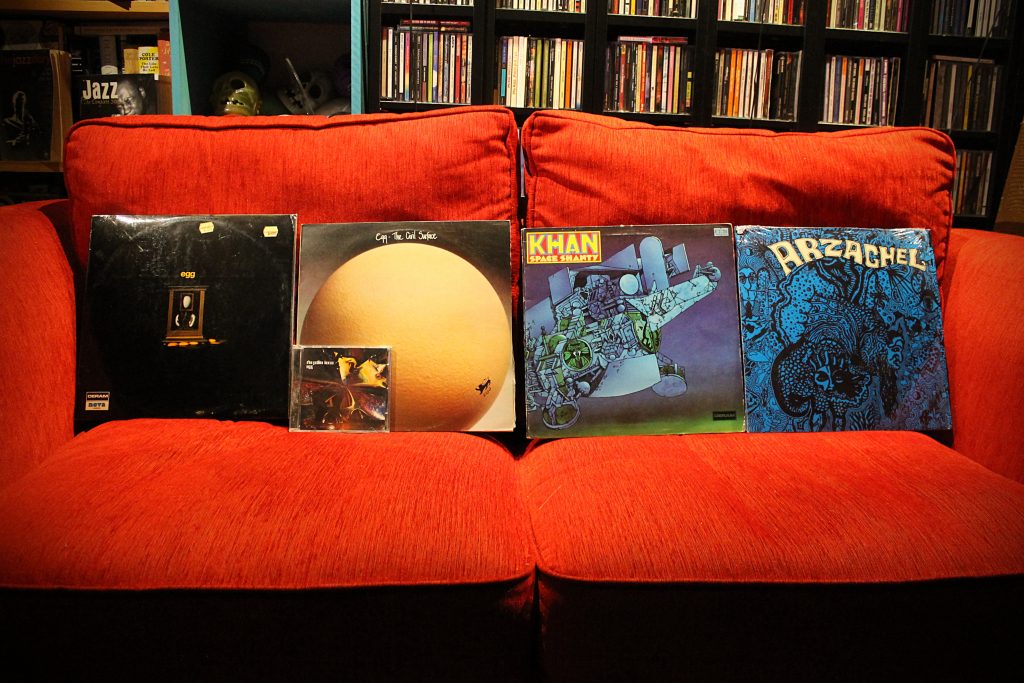 Music today has taken a turn back to 1970 and Progressive madmen Egg. They were formed out of the ashes of Uriel after Steve Hillage left in 1968. They made their debut album in 1970 on Deram and messed with the minds of the music scene at the time with main writer Mont Campbell’s obsession with Stravinsky and an English sense of humour. Intellectuals that don’t buy Pop stardom and have songs called Seven Is A Jolly Good Time (not on the original album but on the CD) have to be taken seriously. They became associated with the Canterbury scene due to the involvement of the keyboard player later known as ‘the other Dave Stewart’ (due to the mega-success of Eurythmics) who later joined Hatfield And The North and because of the Canterbury connection with Richard Sinclair and Phil Miller, plus Uriel included Steve Hillage. It is a wonderful mixture of jamming, Psychedelic, Progressive, complex, Classical, humorous, avant-garde moody instrumental and vocal meanderings that all make complete sense particularly instrumentally on Movement 1 and Movement 2 with Stewart’s great playing and keyboard tones and Campbell’s relentless bass.

Egg released their second album The Polite Force in 1971 but the label interest had waned with the lack of success of the first album they had to convince the label to release it. It follows the same madness as the first album, some kind of controlled abandon. Everyone knows what they are doing but it sounds like they may fall off the edge at any minute. It’s a really amazing set of sounds incorporating what might be called samples these days but are actually field recordings of this and that, some meant to be scary others funny.

Mont Campbell has a long story that you can read on Wikipedia that includes study, soundtracks, dissatisfaction with Egg and Rock music in general and then returning for another album with his old bandmates, The Civil Surface (1974). Joining National Health with Stewart and Canterbury luminaries, learning instruments and the fact that one of his six daughters, Anna, was killed in Syria in 2018 fighting for the Kurdish Women’s Protection Units.

Dave Stewart’s discography is impressive if you like this kind of thing. Uriel, Egg, Hatfield And The North, National Health, Khan and then he played with Bill Bruford. Then out of nowhere, he recorded the Motown Jimmy Ruffin hit What Becomes Of The Broken Hearted with Colin Blunstone and made it to No. 13 in the UK charts and followed it with a version of Lesley Gore’s It’s My Party with Barbara Gaskin that made it to No. 1. Weird.

Khan’s Space Shanty (1972) is one of the great forgotten Progressive and Psychedelic and inventive Rock albums. Steve Hillage was doing that echo repeat idea before Brian May and Dave Stewart is there with his great keyboard ideas. Eric Peachey plays drums and Nick Greenwood plays bass. Greenwood made a solo album, Cold Cuts, in 1970. He had played on the first The Crazy World Of Arthur Brown album (1968) under a different name, Sean Nicholas (for some reason?). The songs are written by Hillage bar three co-written with Greenwood. Hillage’s first solo album Fish Rising (1975) had material that was originally intended for Khan Two but that never transpired. If you like great Hillage lead guitar, you’ll love this. Real songs, real instrumental passages, good vocals, moody, complex, simple, ace.

So Arzachel (1969) were actually Uriel with the original lineup of Egg and Hillage under pseudonyms because Egg had been signed to Deram since Hillage left. Strange but true and it’s a great Psychedelic freak out of an album. Highly recommended, like all of these records.

Song Of The Day is hard because none of these bands have any footage so here’s Steve Hillage on the Old Grey Whistle Test in 1975: