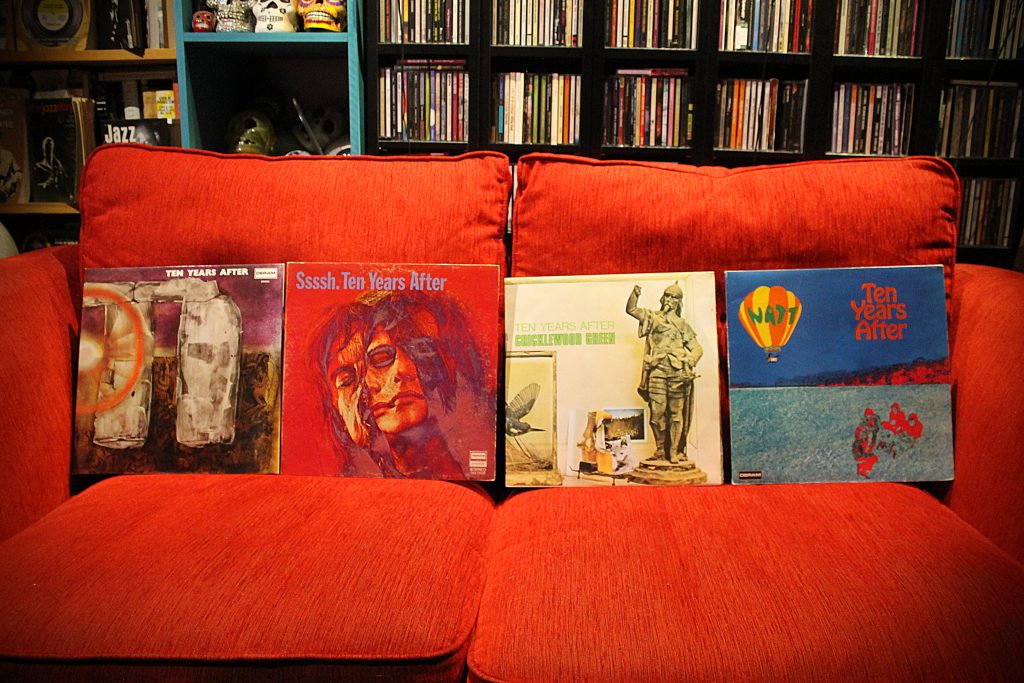 Music today was Ten Years After and Stonedhenge (1969), it was the first album I heard by them and I heard it a lot because it was in our house as a lost family member had a collection of sixties records. Although the band is seen as a Blues-Rock band, this album, like Cream, comes from that strange genre we call Psychedelic Blues. The opening track Going To Try fits that description perfectly. Followed by I Can’t Live Without Lydia, suddenly it’s jazzy piano but with another slightly mad influence. Then it sounds like Mose Allison on Woman Trouble and Skoobly Oobly-Doobob is skatting. Hear Me Calling, one of their most famous songs covered by Slade is next. It’s classic sixties and features Alvin Lee’s famous lead guitar. This is the thing about great guitar players, they sound like themselves even though they are playing Blues. These days what might have been turned into the most generic of genres, Jimmy Page, Rory Gallagher, Roy Buchanan or Paul Kossoff even if they play in a traditional Blues style, you still know it’s them.

A Sad Song opens Side 2, restrained, soft, moody – the album is called Stonedhenge after all. Ric Lee’s Three Blind Mice is played on the drums and is an example of how they turned simplicity into an idea. No Title is another calm, soft piece. The finesse, you have to listen to this album on headphones so you don’t miss the dynamics, so you’re not distracted by the world and so you can allow the dynamics to penetrate and so you can hear Alvin Lee’s touch, Chick Churchill’s organ and Leo Lyons’ thudding bass. Then there’s what happens in the speakers, how they played around with the stereo.

The album, their second studio release, hit the stores in February 1969, Woodstock was in August 1969 and their famous performance turned them into superstars, Alvin Lee’s guitar playing dazzling the onlookers. The penultimate track is Faro, odd little ditty this one, like a children’s song with Leo Lyons’ bass and a cello, ending with a steam train travelling across the speakers, it was mesmerising as a kid. Last track, Speed Kills, sounds like John Mayall meets the Stones and has that unmistakable Alvin Lee sound and ending with the train abruptly colliding with a piano (not really).

Ssssh also released in 1969 was released in the same month as Woodstock, it was their new album and nobody at the festival would have heard it yet. But after the festival when they went looking for records by the bands they saw, the bands whose reputations had grown, they wouldn’t be disappointed. Opening with Bad Scene, uptempo Psychedelic Blues with Alvin Lee’s slick fast guitar, the fastest guitarist in the West. Two Time Mama sounds like it could be Canned Heat, another Woodstock favourite and played in that old American Blues tradition with slide guitar. Stoned Woman (haha perfect) is next, not much of a song but it’s about the vibe, the sound of the band, the soul is in the commitment to the style, not the songwriting skills. The well-known cover version Good Morning Little Schoolgirl written by Sonny Boy Williamson, also recorded by Peter Green’s Fleetwood Mac and countless others is about as un-PC as it gets. At 7.10 it’s really a showcase for Alvin Lee’s soloing.

Side 2 opens with If You Should Love Me, it could be an Eric Burdon song and if you haven’t heard the post Animals Eric Burdon Psychedelic Blues journey then you are in for a treat although this track wears out its welcome pretty quickly. It’s one of those chord progressions that the musicians love going round and round on or did in those days. Followed by the oddly titled I Don’t Know That You Don’t Know My Name, acoustic and piano and tom-toms, short, melodic and a welcome respite from the eternal outro of the previous track. The Stomp sounds like ZZ Top would sound if it was then – and they had an organist. It’s taken directly from Muddy Waters style American Blues. These English bluesy bands loved those guys and owe them a huge debt, jamming on a groove which interpreted by lads from London had its own sound despite its roots. It continues into the final track, I Woke Up This Morning. It’s like they are moving further and further away from the Psychedelic influence of the day and going straight to the original Black Blues source. It must have sounded great in 1969.

Cricklewood Green (1970) saw Ten Years After enter into the seventies as a massive band. In the same Rock world as Grand Funk, this was the sound of now. It makes you realise how far ahead Led Zep were of these bands (Led Zep III came out in 1970). As Grand Funk got catchier, Ten Years After couldn’t shake the Blues roots off even when they got catchier and Led Zep got more interesting and inventive. This was still along the lines of Blues-Rock but with better songs, Sugar The Road, Working On The Road and 50,000 Miles Beneath My Brain, the band were firing. That Gibson 335 sound reminds me a bit of Gary Clark Jr and his Epiphone Casino sound. Year 3,000 Blues is that Stones idea of singing an ironic country song, it worked then and would have been a new style to an English audience.

Me And My Baby, easy, jazzy Soul Blues opens Side 2. You can imagine this band’s record collection, all-black Blues artists. But next comes the band’s biggest hit Love Like A Man in the album 7.13 version. The single was the first record to have different speeds on each side. An edited studio version of the song on Side 1 at 45RPM and a live version on Side 2 at 33RPM. It went to No. 10 in the UK chart. Circles is another acoustic track that showed another side of the band. It wasn’t all influences from the US Blues, this was more of a hippie track. The album finishes with As The Sun Still Burns Away, they always seemed to find some odd sound effects on their records and this track is no exception.

The second of two albums released in that year, Watt (1970), had a mind-expanding Psychedelic cover and when you opened it up to look inside the gatefold it was another mind-warping picture of the mixing desk and the band in Psychedelic red with droplets of turquoise – you need this record for the cover alone. The guitars have started to sound like he’s discovered some kind of sustain pedal on I’m Coming Home and My Baby Left Me and Chick Churchill has a new synthesizer. Think About The Times is Alvin Lee trying to write a proper song and it’s alright. At this point, a year after Woodstock, the band had four albums out in two years, a lot for Alvin Lee as leader, lead singer, main songwriter and star virtuoso guitarist to keep up. Add the touring in and the workload for him was huge. It would have been a great band to be the bass player. I Say Yeah finishes Side 1 in a flurry of groovy jamming, great.

Side 2 opens with the instrumental Western sounding The Band With No Name and what sounds like 6 string bass through a tremolo pedal. Gonna Run has that Mose Allison sound again (one day I’ll write something about him). From what I can see this album wasn’t thought of as one of their best because of the songwriting but that’s only part of the story. It’s a Blues band, it’s going to be samey, it’s going to concentrate on jams, solos and three-chord progressions, you don’t order a burger and damn it for not being sushi. She Lies In The Morning is the last of the original compositions and it sounds more like a sixties song than a seventies song but it is only just 1970. The song has a nice long instrumental journey to the end, how come I always like the albums the press doesn’t. The album finishes with Chuck Berry’s Sweet Little Sixteen live, of course it does.

The next album was…

Song Of The Day is Ten Years After at Woodstock, August 1969: