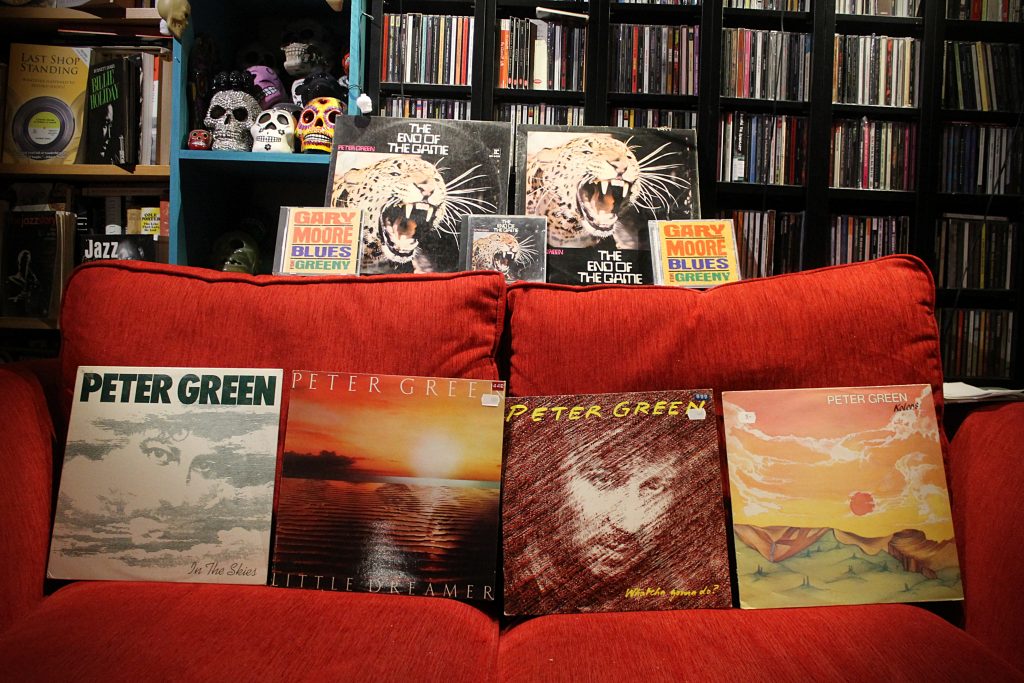 Music today is, of course, all Peter Green although one week ago today I posted about British sixties Blues bands including the first Fleetwood Mac album and the Song Of The Day was Oh Well recorded live in 1969. If you followed Peter Green out of Fleetwood Mac you’ll know about the trauma, the acid incident in Germany and the homelessness. Suffering from mental issues for many years he was finally diagnosed with schizophrenia. Nobody will be talking about the solo albums in the coming days because nothing compares to his heyday. So here’s a brief look at what happened after Fleetwood Mac.

He made The End Of The Game (1970) a month after leaving Fleetwood Mac. It’s jams, and although it lacks structure, it’s most of what I want from an album, that is ideas, free form exploration and unbridled passion. It doesn’t always have to be songs even if Peter Green was so good as a songwriter and as a singer, just hearing him noodle around on the guitar with his friends is fine by me. The other musicians are Zoot Money, legendary sixties keyboardist extraordinaire, who played with many bands from Kevin Ayers and Kevin Coyne to Alexis Corner and Eric Burdon and his own Big Roll Band. The bassist was Alex Dmochowski who played with Heavy Jelly, Aynsley Dunbar and Frank Zappa. Drummer Godfrey Maclean might have had a spell with Brian Auger (who has no Wikipedia links to any of his records, go figure?) and Nick Buck who played with Hot Tuna also on keyboards. The album is all instrumental but the CD version has four extra tracks, including Beasts Of Burden (not the Stones’ song), which Green sings. Probably considered not the greatest album by Peter Green or anybody but I love these rambling albums of that era.

His second solo album In The Skies didn’t arrive until 1979 and it’s as different to his first album as his first is to Fleetwood Mac. You can imagine people saying it’s lovely to hear his voice and guitar after nine long years although the first two tracks have Snowy White on lead guitar very much in the style of Peter Green. It’s not until A Fool No More that Green plays the solos. The album has old friend Peter Bardens on keyboards and Robin Trower’s drummer Reg Isidore with session bassist Kuma Harada. Maclean is back for a track on the drums. It’s a tentative return in a period when the music world was obsessed with Punk and New Wave and it must have sounded out of context in that climate but it has its moments, little too much bongos for my taste.

On Little Dreamer (1980) the songs are written by Green’s brother Mike. It’s very middle of the road, Chris Rea territory, it doesn’t have the raw emotion of those classic Fleetwood Mac sixties tracks but there was a lot that happened between then and now. Dave Mattacks from Fairport Convention plays drums. It’s dated by that fretless bass on the last track whereas with the amazing stuff from the sixties, the word dated doesn’t come to mind. Essence doesn’t date.

Whatcha Gonna Do? (1981) was the third album in three years. It seems that he was enjoying himself and growing in confidence but the albums stay firmly in the middle of the road genre and he doesn’t seem to know it. Mattacks returns on drums with session bass player Mo Foster. Horrible sax from Jeff Daly on the second track, The Promised Land, but again it’s the era. If this record was made in the sixties or even the seventies it would be so much better. We were entering in that sonic low period in music, unfortunately the time when Green decided to reappear. What happened to the Blues? How did it get taken over by well-cut suits (thanks Eric) and engineer-producers calling the sonic shots. There’s no edge, there’s only smooth well-dressed guitars, polished with expensive cloths, recorded in studios that look more like spas than places of creativity. Ideas don’t spring from manicured furniture and in-house catering. All the last three albums are produced by Peter Vernon-Kell but who is he? PVK was a late seventies record label that managed to have no success at all with anything, picking dodgy middle of the road acts with commercial aspirations for their stable. One of their artists, The Singing Postman, had a single called Fertilizing Lisa. So, one wonders if with his comeback if Peter Green got in with the wrong crowd, yes he did.

White Sky came in 1982 after he had escaped from Peter Vernon-Kell and PVK. Reg Isidore is back on drums and it’s definitely better but it’s music for the supper clubs. It didn’t have to be this way but then working with Green’s mental health issues might have made it hard and the fact that he was in there doing it at all was something. Better sounds on this record, it doesn’t sound like it’s produced by someone with expensive socks.

Kolors (1983) is the last of this run of albums. Later, after another hiatus, he formed Peter Green’s Splinter Group and he made a lot of records between 1997 and 2003, none of which I’ve heard. It seems he stopped recording his own records around then. He has made lots of guest appearances over the years. He died yesterday aged 73. RIP Peter Green, condolences to friends and family.

Song Of The Day is Supernatural by John Mayall’s Blues Breakers featuring Peter Green on guitar from the album A Hard Road, released in 1967.

Oh Well by Fleetwood Mac with Peter Green, Danny Kirwan and Jeremy Spencer. Live in 1969 on Monster Mash and introduced by Alan Price and his Geordie accent:

Man Of The World by Fleetwood Mac with Peter Green, Danny Kirwan and Jeremy Spencer live on Beat Club in Germany 1969:

When Peter Green gave up the music biz in the seventies he decided that his famous ’59 Gibson Les Paul should go to a good home and he chose the late Gary Moore as the place where the instrument would be properly appreciated. (It eventually found its way into the hands of Kirk Hammett from Metallica who bought it for around a million dollars.)

In 1995 Moore released an album called Blues For Greeny and as a tribute to his hero he exclusively used that ’59 Les Paul on the album. This is a live concert version at the Shepherd’s Bush Empire in the year the album was released: