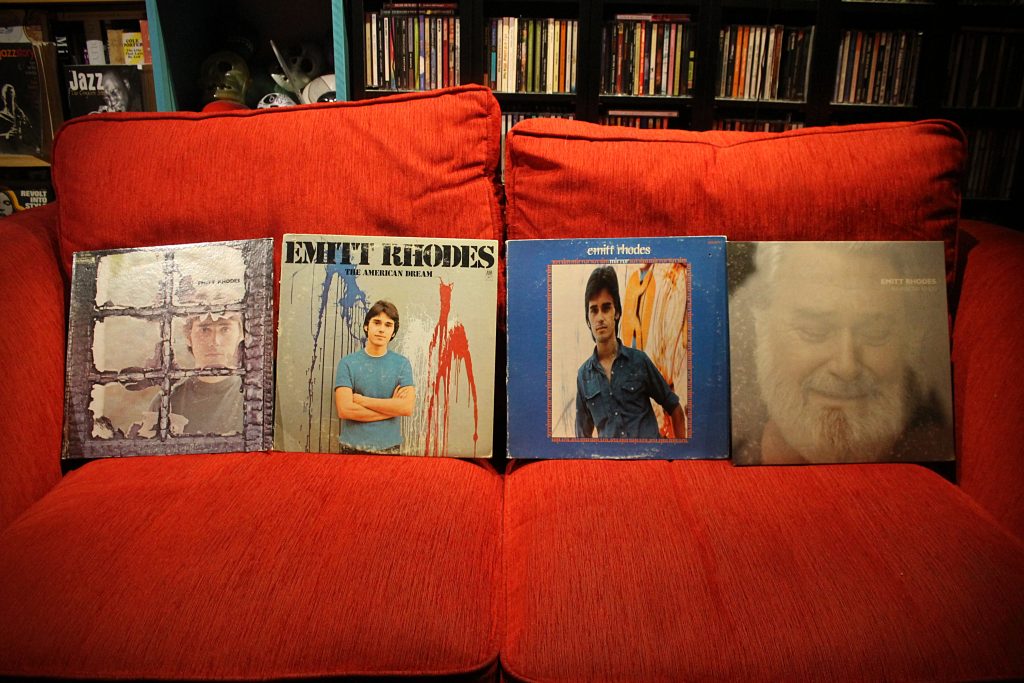 Sadly, music today has to be a tribute to another great loss that I haven’t seen reported anywhere other than on Wikipedia’s R’n’R deaths 2020 page that I check for this very reason. On July 19th we lost Emitt Rhodes, otherwise known as the one-man Beatles. I mentioned him recently when I posted Fairport Convention performing Time Will Show The Wiser after the loss of Judy Dyble – Emitt Rhodes wrote that song when he was in an earlier sixties incarnation with the band The Merry-Go-Round.

The whole story of Emitt Rhodes is a music industry disaster. He signed a contract with ABC/Dunhill Records that demanded a certain number of albums a year. He was the singer, the songwriter, the producer, the engineer, the pianist, the bassist, the guitarist and the drummer. He couldn’t possibly keep up with the demands of the contract, one album every 6 months, and this led to litigation that had the record label suing him and withholding royalties and that had him retreat from the ambition of releasing regular albums for more than four decades.

In 1970, Rhodes released his first self-titled solo album and if you like Paul McCartney or Harry Nilsson or both, you need this record. Great songwriting and singing, catchy songs, ideas, a great debut album. It was recorded at home on a 4-track, when he was signed he transferred the music onto an 8-track and redid the vocals. The song Fresh As A Daisy made it to No. 54 on the Billboard charts, the album an impressive No. 29.

It gets tricky from here on. The Merry-Go-Round were signed to A&M releasing just one album in 1967. The single Live from that album reached No. 63 on the chart. (The B-side was Time Will Show The Wiser.) The A-side was covered by The Bangles on their impressive debut album All Over The Place released in 1984. After The Merry-Go-Round had broken up and Rhodes was having success as a solo artist, A&M still had the rights to songs recorded 1967-1969 but decided not to release them. Without approval, they changed their minds and released The American Dream in 1971 to cash in on the success of the ABC/Dunhill Records released solo album.

In the same year, Mirror was released confusing the public – it didn’t follow up the success of the first album. One more album, Farewell To Paradise, was released in 1973 and that was that. I don’t have Farewell To Paradise but there’s a compilation on Spotify that covers all his solo releases. After 43 years in 2014, Rhodes released an album aptly titled Rainbow Ends. It’s a lovely record and he never lost his skills as a writer and musician, engineer and producer. He was screwed by the music industry who could only understand numbers and not art and talent.

You can find his records quite easily secondhand in America at reasonable prices but pick up Rainbow Ends on vinyl sooner rather than later because it must have been a limited release as newer albums by artists like this usually are. Guests include Aimee Mann, Susanna Hoffs, Nels Cline and Pat Sansone from Wilco, Jon Brion, Roger Manning Jr. and Jason Falkner.

Video Of The Day includes this PledgeMusic trailer, remember PledgeMusic, another greedy music business disaster. The second clip is a promo from back in the day. It’s the track Really Wanted You from Mirror (1973).