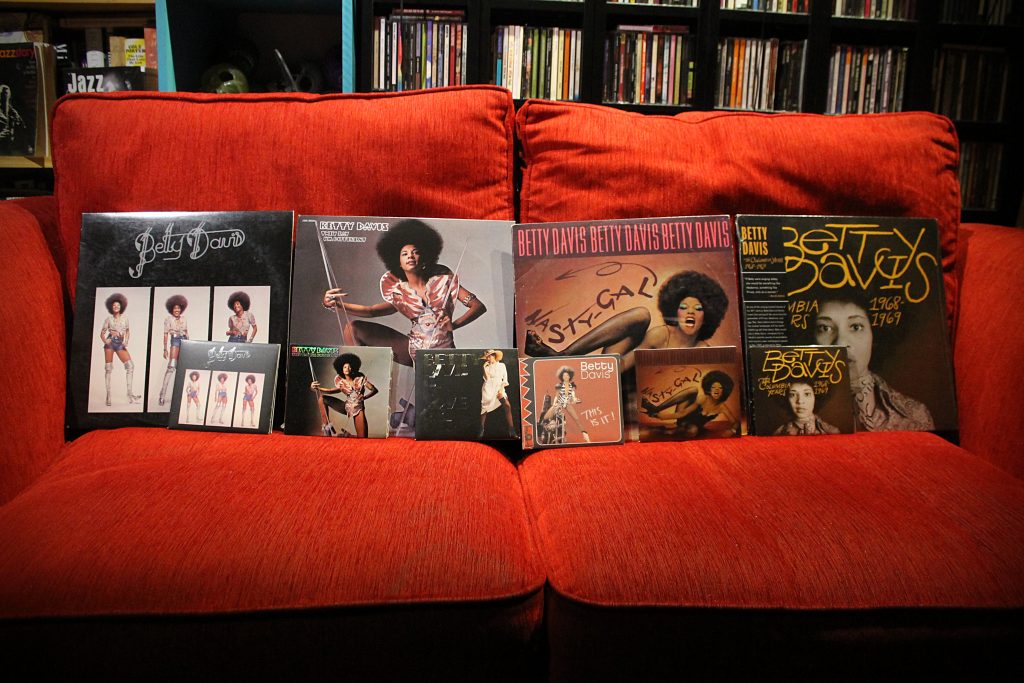 Music today comes from the great Funk/Soul sensation Betty Davis (née Mabry) who was 74 yesterday. She seems to be off most people’s radar despite heavy friends and a slew of fantastic albums in the seventies. Possibly missed because she retired from the music business at the end of the seventies but like Annette Peacock, a lack of commercial success only creates a cult following despite the brilliance of the artist’s output. In 1968 she married Miles Davis, they were together for a year and she appears on the album cover for Filles De Kilimanjaro (1968). She is credited with introducing Davis to Jimi Hendrix and Sly Stone and introducing Miles to a different generation of musicians, she was 19 years younger than him and woke him up to the ‘now’ of the sixties. She allegedly talked him into changing Witches Brew to Bitches Brew (1970) and her introductions to her friends led Miles on a different track that led to Jazz Fusion. (Since meeting him, Miles had always planned to record with Hendrix.)

Although she was initially a model she also wrote and had some singles, she wrote Uptown on The Chambers Brothers album The Time Has Come (1967) which reached No. 6 on the US charts. She eventually became the singer in her own band releasing three albums, the first with Greg Errico producing and playing drums (Sly And The Family Stone), Larry Graham playing bass (Sly And The Family Stone and Graham Central Station) and Neil Schon playing guitar (Santana and later Journey), Richard Kermode on keys (Janis Joplin’s Kozmic Blues Band/Malo/Santana), Merl Saunders (Jerry Garcia/Grateful Dead) and journeyman bassist Pete Sears.

She was allegedly wild, sexually provocative live, controversial, unbridled, passionate, strong and too much for the world. She was banned from TV, boycotted by religious organisations, smart and aware of the shortcomings of modelling. She dated Hugh Masekela, Eric Clapton and Robert Palmer, the latter helping her get a deal with Island Records that led to the major label release on her third album Nasty Gal.

Her first self-titled album (1973) is a Funk/Soul classic with the mind-boggling opening track If I’m In Luck I Might Get Picked Up. This song sets the scene and I don’t really need to say much else about her, it speaks for itself. The album was released on Just Sunshine Records and I happily have an original copy but you can find nice reissues on Light In The Attic Records. The Pointer Sisters appear as does Disco star Sylvester and Merl Saunders on organ.

They Say I’m Different (1974) also on Just Sunshine (I have the original, yay) followed the debut in the same style, only Merl Saunders remained from the first album. It was produced by Betty and continues with classic Funk/Soul rhythms and grooves and her unmistakable melodic growling.

The third album Nasty Gal (1975, released on Island Records, I have it too) was a commercial failure. It is notable for having the song You And I co-written with Miles Davis and arranged by Gil Evans. Otherwise, it’s the same high powered Funk/Soul and it’s a mystery as to why it never took off except for the fact that she was ahead of her time, Carlos Santana said, “She was the first Madonna, but Madonna is more like Marie Osmond compared to Betty Davis. Betty was a real ferocious Black Panther woman”. There was a second Island album recorded in 1976 that was never released until Light In The Attic uncovered Is It Love Or Desire? (released in 2009).

In 2014 Light In The Attic uncovered unreleased material, The Columbia Years 1968-1969. It features Herbie Hancock, Billy Cox, John McLaughlin, Harvey Brooks, Mitch Mitchell, Wayne Shorter and Larry Young with arrangements by Miles Davis and yet somehow it took 50 years to be released or rather no one saw her potential, it’s demos and these famous friends weren’t just there for fun, but still, no one at the label had a vision – except her. Hear her singing Cream’s Politician – it is kinda rough generally, not quite realised and this band isn’t on every track but for a fan it’s essential. I also discovered that Politician isn’t on the album or the CD but is streamed on Spotify with different cover art – go figure.

In 2017 a documentary film was made about her, They Say I’m Different (I just ordered it and should have it by Thursday).

Song Of The Day is If I’m In Luck I Might Get Picked Up from Betty Davis’ self-titled debut album released in 1973 on Just Sunshine Records.